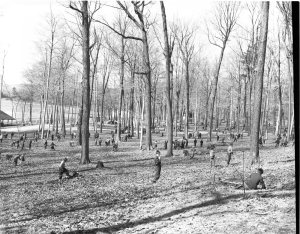 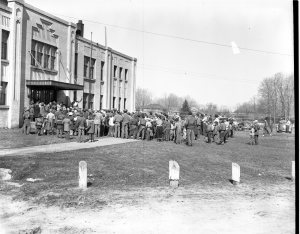 Champion egg hunters. Y’s Men sponsored a huge Easter egg hunt in Little Lake Park Saturday morning. Metal tokens were hidden throughout the park, exchangeable for prizes later. Several of the tokens were punched with a series of holes entitling the finder to the main prizes. A large candy firm had donated 7,000 chocolate Easter eggs, chocolate rabbits and kiddy-pops to towns from Montreal to Windsor, such as Sudbury, Peterborough, Guelph, Acton, Brantford, etc. Public and separate school children up to grade six were allowed to participate. 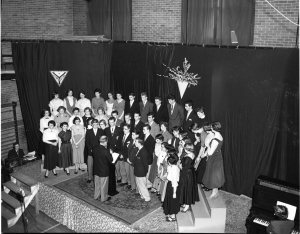 Midland District High School Glee Club perform at the “Stars of the Festival” on March 31st at the YMCA. Called the “Choraleers” their director is Alex Docherty.