The Santa Claus parade in Midland Saturday should be bigger than ever this year. Members of the Midland Lions Club prepare the large float that will carry old Santa into town. Left to right are Garnet Armstrong, in charge of the Lions float committee, Herb Secord, an assistant, and Lions Lloyd Murday, Bud Turnbull and Bob MacLeod.

Mrs. E. Keylwerth, Ken Simms and Hans Wiese paint some of the scenery for the Leitz float. This is the second year of the return of the annual parade after several years without it. Providing music for the procession will be Midland Citizens’ Band, the Collingwood band and Midland Sea Cadet Corp band.

One of the best floats in last year’s Santa Claus parade was the one entered by Midland Planing Mills. Making sure the firm’s float will enjoy the same success in Saturday’s parade are Ray Laurin, left and Bert Maheu.  The parade is sponsored by the Midland Junior Chamber of Commerce (Jaycee’s). Committee Chairman J. E.
Lounsbery said there will be 15 floats  (at least three of them new entries), three bands and models of new cars in the procession that will leave the curling rink at 2 p.m. The parade will move down King Street to Bay Street, east on Bay to the CNR station where Santa will hold court on a throne being provided by the Midland Y’s Men’s Club.

Getting ready for Midland’s big Santa Clause parade Saturday, Mrs. Don Argue wields the paintbrush while Harvey Boyd marks out the letters on one of the displays to be featured on the Bausch and Lomb float. 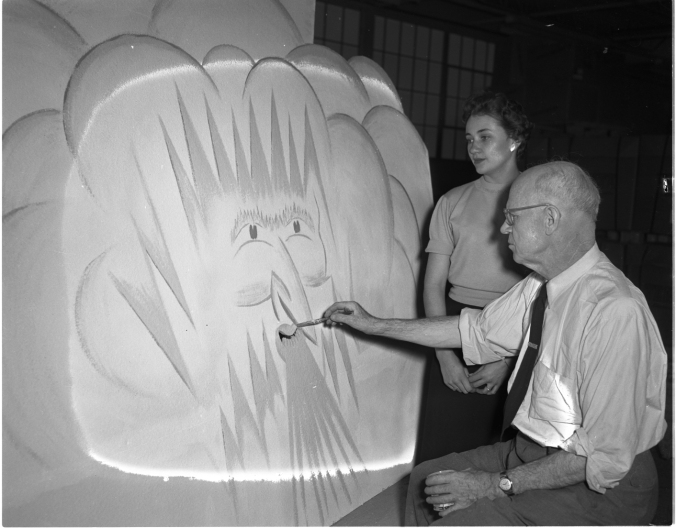 Putting the finishing touches on the North Wind, the theme of Midland Industries Ltd. float in Saturday’s Santa Claus parade is Jim Wood, designer, for the plastics firm. Watching is Miss Anne Shiels, who will be “Queen” on the float. 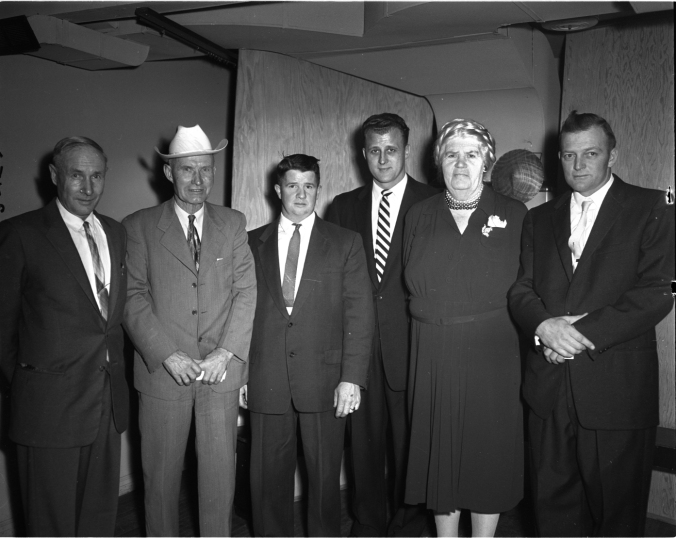 There are bound to be some changes in Tay Township council this year with the retirement of Deputy-reeve Mrs. Minnie Mayhew. Pictured at a farewell party for Mrs. Mayhew at Bourgeois’ dining room Friday night, the present council includes, left to right. Clerk Ralph Dalton, Reeve Fred Kinnear, Councillors Norm Widdes and Ray Atkinson, Mrs. Mayhew, and Councillor Lawrence Parker.

New houses seem to be springing up everywhere you look in Midland these days. The area above, between the Leitz factory and Wireless Hill, was a bare sandy plain only a couple of years back. Now it is dotted with many taxpaying homes. 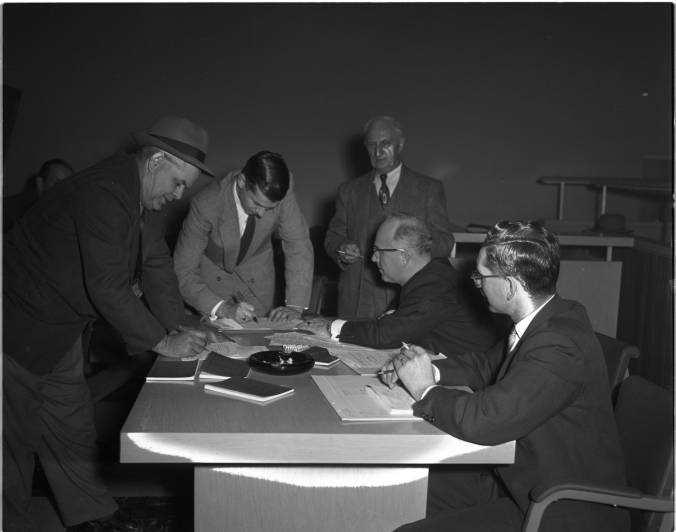 People’s warden at St. Mark’s Church,  Arthur Lloyd examines a scale model of the new memorial tower to be erected at the church.

The tower is to be a memorial to Captain and Mrs. Ed. Burke and the McCartney family. Bequests for this purpose had been made by the Burkes and by Miss Annie McCartney. The tower will house the chimes donated to the church by Jim Thomas in memory of his son Bob, who died in 1948 at the age of 13. The 40-foot tower, originally planned when the church was enlarged in 1953, is of contemporary style, and will be made of pre-cast concrete according to the plan by Toronto architect E. S. C. Cox.

It’s a question whether learning to skate is harder on the tiny tots or on the mothers. Above, Mrs. Lloyd Roberts helps her two-year-old daughter Lynn get the feel of the ice at Midland Arena.

Wooden hulled steamers St. Andrew, formerly the W. B. Hall, and C. W. Chamberlain, both owned by the Playfair Line, are shown coaling up at the Beck coal wharf at Penetanguishene. The small tug  Shawanaga is the wooden vessel in front of the two steamers.  —Photo by J. W. Bald.  (Note that J. W. has written his name and the date on one of the timbers in the foreground.)

For the marine buffs, we include the entire article that accompanied the photo above;      The early days of the shipping interests of the late James Playfair were recalled recently when W. R. Williams reminisced about the steamer “St. Andrew,” the first steam-driven ship purchased by Mr. Playfair in 1896. The “S.S. St. Andrew” was originally the “W. B. Hall”, built in 1885 by Maltese shipbuilder Louis Shickuna of St. Catharines, relates Mr. Williams. The single screw, wooden steamer, which was built for William B. Hall of Toronto, was 157.6 feet long, 27.9 foot-beam and had a depth of 12.4 feet. Deciding to enter the grain trade, Mr. Playfair bought the “W. B. Hall” and had her lengthened to 192.6 feet with a beam of 41 feet, and a gross tonnage of 1,113 tons. This rebuilding of the “St. Andrew” was done at the Owen Sound Shipbuilding and Dry Dock Co. and gave the ship a capacity for 40,000 bushels of wheat. Captain Featherstonehaugh became financially interested in the boat and was given command of her. On her trip to the head of the lakes she carried coal and returned with grain. Northbound on Sept. 20, 1900, the St. Andrew struck the rocks near Bachand Island near the entrance to Nipigon Strait, continued Mr. Williams, who noted that she soon filled with water and sank in deep water, but not before her crew made their escape to the island. They were picked up by the tug “Georgian” and taken to Port Arthur the following day. Another fond memory of Mr. Williams is the wooden tug “Shawanaga” which was built in 1882 at Penetang by “carpenter Morat” for Charles Beck, lumber merchant. The 80-foot tug had a beam of 17 feet and was used each summer to tow log rafts from various Georgian Bay timber limits to the two Beck sawmills at Penetang. At the close of navigation in 1904 she was sold to Joseph Ganley of Sault Ste. Marie because Mr. Beck had the 90-foot tug “Wahnapitae” under construction. After serving several owners the registry of the “Shawanaga” was closed Sept 20, 1912, because she was “broken up” at Midland. 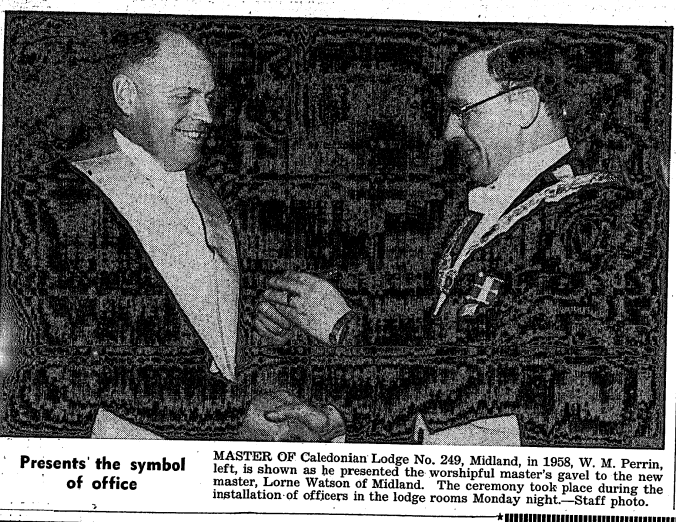 By 1958 this scene was quickly disappearing with the advent of fuel oil but even at my tender age, I can remember the coal furnace in my uncle’s basement, although he had a mechanical stoker and watching the delivery truck slide coal down the chute into the neighbour’s basement. The car that wouldn’t start in the cold is also pretty much a thing of the past. The endless cranking of the engine, before electronic ignition and fuel injection.