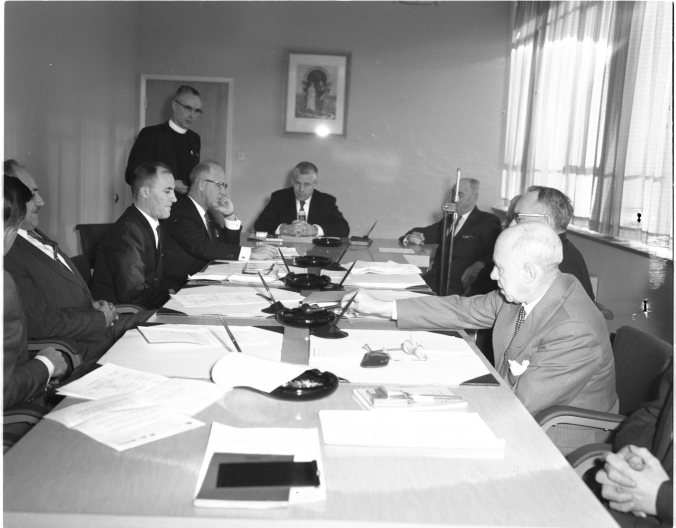 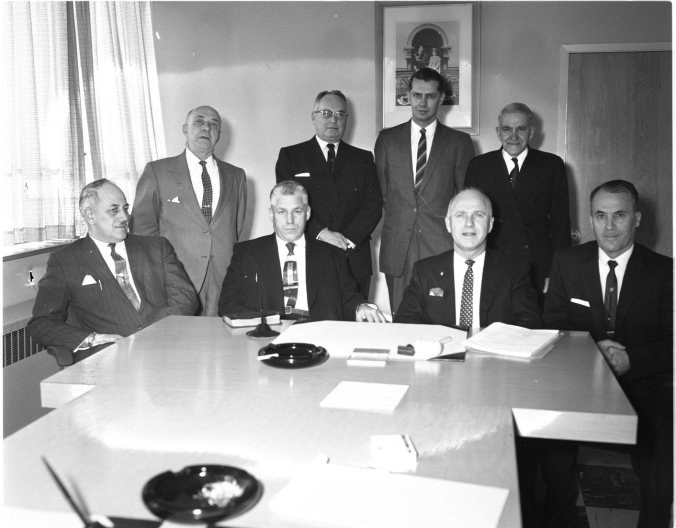 Midland’s council for 1960 is seen above following inaugural ceremonies at the municipal building Monday. Left to right, seated, are Deputy-Reeve, Clinton Smith; Mayor, Charles Parker; Clerk, William Hack; and Reeve, Herb J. Beauchamp. Standing are Aldermen James Mackie, William Orr, Douglas Haig and Percy Crawford. (Note the image was reversed in the newspaper, hankies on the wrong side, we have left it that way so that the newspaper caption lists the names in proper order.) 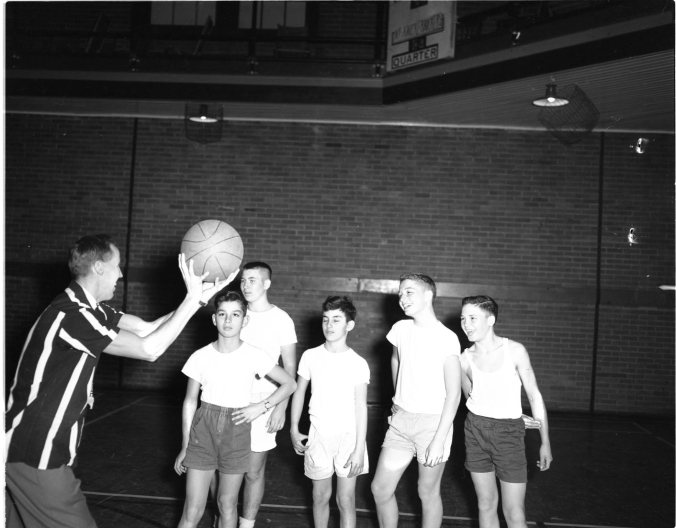 Little league basketballers at the ‘Y’, John Thomas, Tom Gordanier, Lawrie Thomas, Jerry Beteau and Morley Bath kibitz with sports director Lloyd Stackhouse as Mr. Stackhouse gives them a few pointers. The little league cage games were introduced at the Midland ‘Y’ a week or so ago. 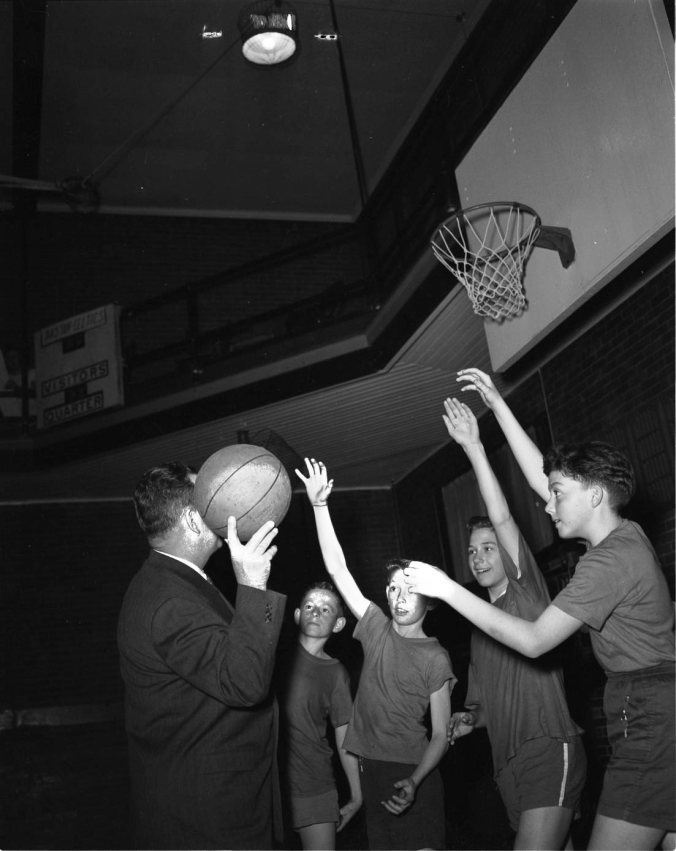 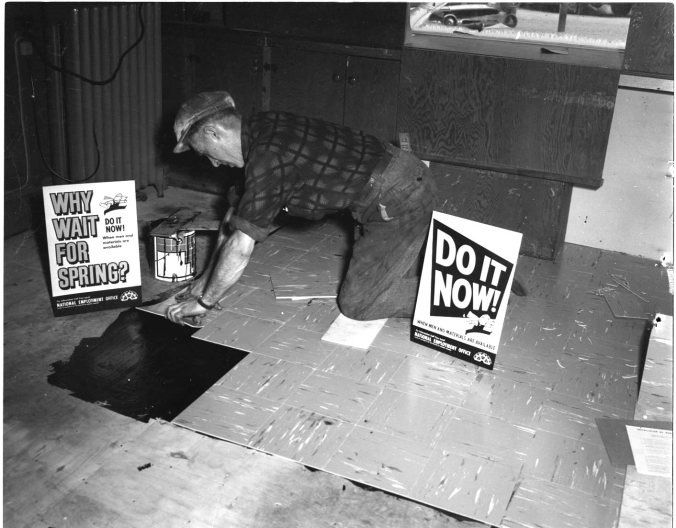 The winter employment committee of North Simcoe district is endeavouring to encourage householders and firms to have renovations and repair work done now rather than then wait until spring. Here contractor Jim Cowan, currently in charge of revamping the Free Press Herald offices, lays flooring in the main office. 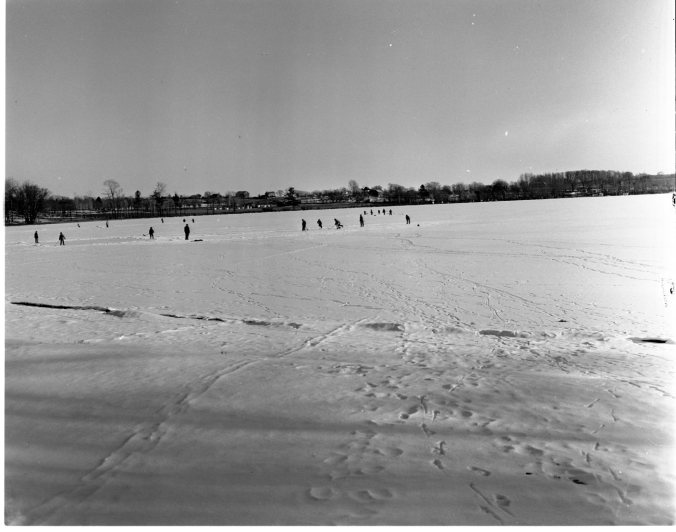 Little Lake’s frozen surface provided plenty of activity for Midland children during- the Christmas holidays, here, at least four groups of boys have cleared off an area to play a good old fashion game of shinny. 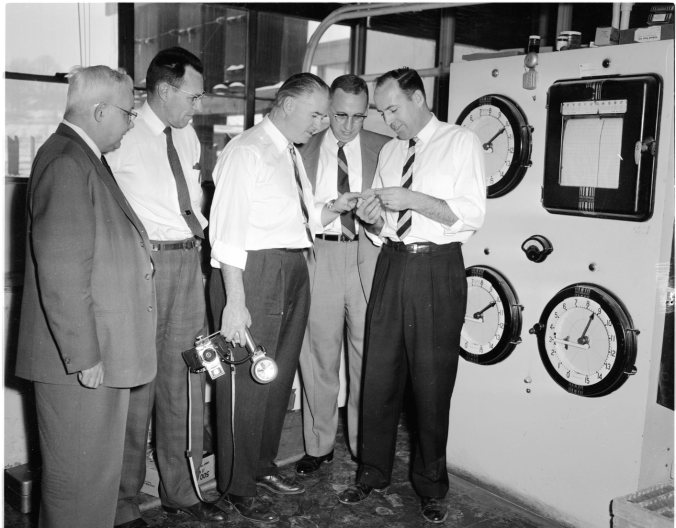 Manager of the Midland plant of Bausch and Lomb Optical Company Ltd., Larry Curran (right) explains the workings of a micromax control unit for fusing bifocals, to a group of B & L representatives who toured the plant Thursday. 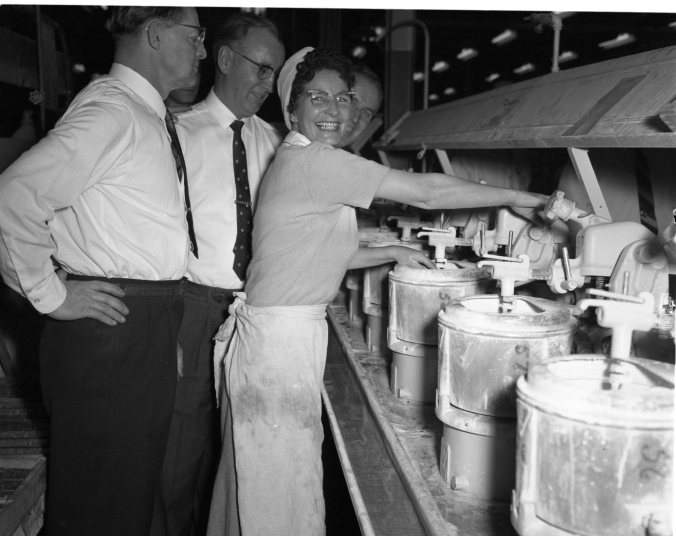 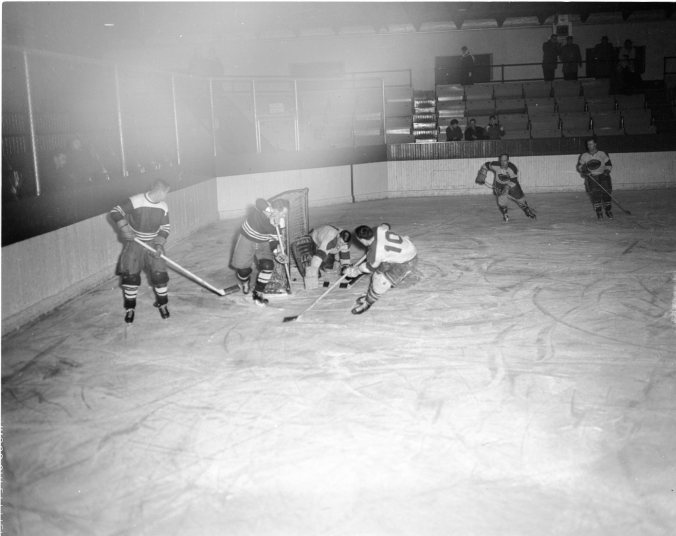 Coming up with one of his greatest efforts in a long career, Midland Flyers’ Morley Spiker scored five of his team’s goals in a 6-4 win over Meaford Chevvies here last Wednesday night. Spiker is seen poking the first of his quintet behind goalie Elgin Cubitt while Meaford forward Barney Walmsley (10) rushes in too late to help. Flyers host Collingwood here tonight. 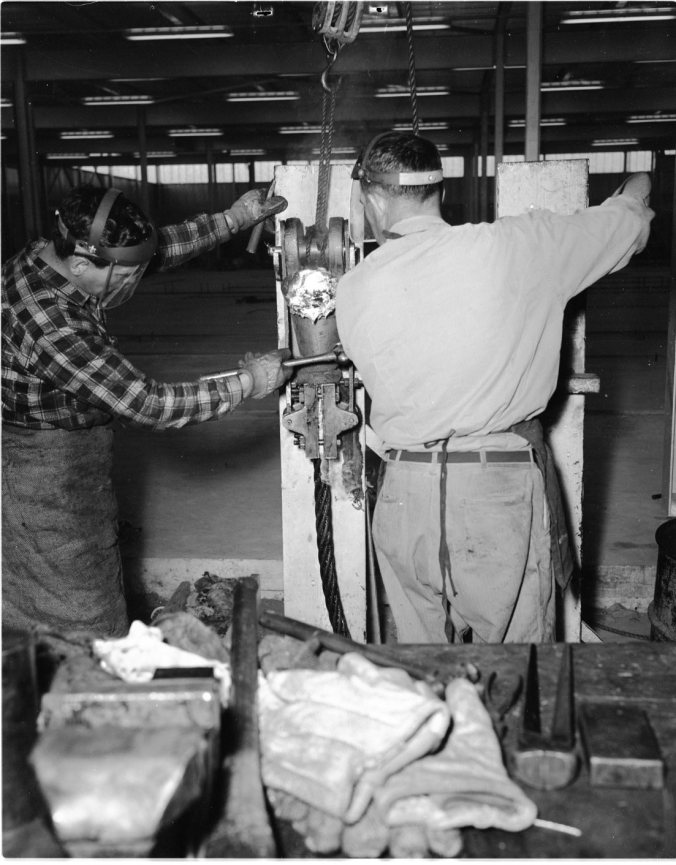 Good news for everyone in the Midland area, some 20 men are already at work in the new B. Greening Wire Company plant in Midland. Gil Hamelin (left) and John Fox are pouring the molten zinc which bonds the wire ropes securely into their sockets. Some 40,000 feet of such rope is being prepared here for use on three bridges in the Welland area. 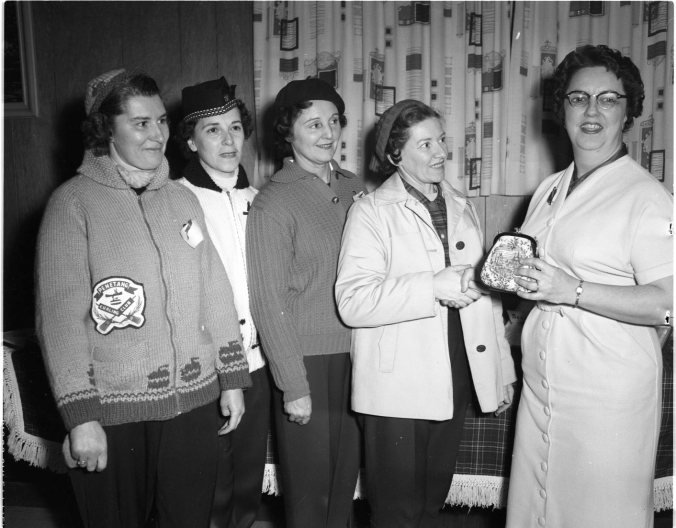 In the first spiel of the season held by Midland Ladies Curling Club January 6, a novice rink skipped by Mrs. Godfrey Trilsbeck of Penetang sprung a surprise by winning one of the top prizes. They are left to right, Mrs. Walter Spearn, Mrs. Orval Ambeau, Mrs. Len Carter and Mrs. Trilsbeck, with Mrs. Norman Greene, chairman of the bonspiel committee. 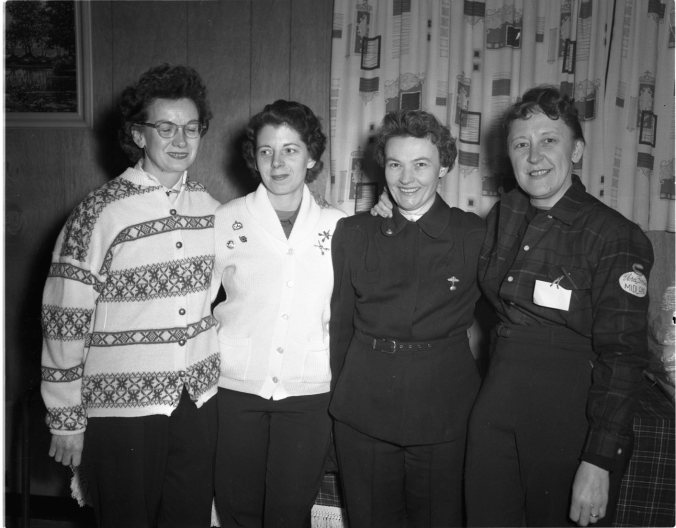 This new intertype machine in the Free Press plant features automatic type-setting equipment which handles teletype tapes as well as manual operation. Seated in front of the machine is veteran operator Frank VanStone. Grouped around, left to right; are Bob Goodall of the Intertype Company, Jack Jorna, Clare Holden and Bill Murphy. 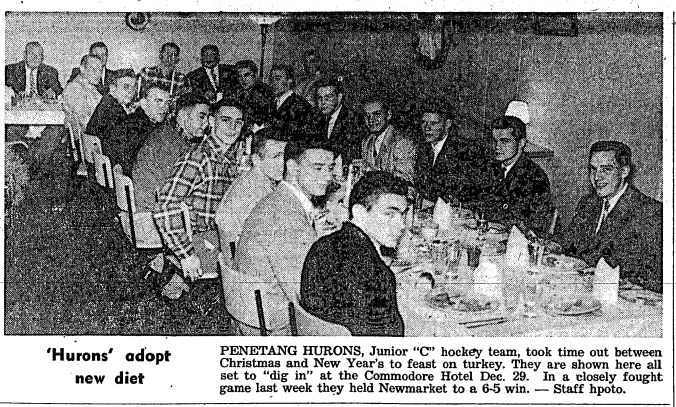 County Herald headline of January 15, 1960; COUNCIL APPROVES PLAN TO RENT POLICE CRUISERS. At its first meeting of the year Monday, Midland council decided to call tenders for the renting of a police cruiser for use by the Midland department.  Noting heavy maintenance upkeep costs in the past Alderman James Mackie, chairman of the police committee, said he wished to try the rental service for one year on an experimental basis.

Free Press Herald headline of January 18, 1960; SCORE NARROW UNDERPASS WANT HAZARD ELIMINATED. (Must admit I don’t understand this headline) Winter Employment Committee, representing six North Simcoe municipalities, Thursday night endorsed a resolution of Victoria Harbour council calling for the replacement of a narrow subway on Highway 12, about one mile west of the Harbour, with a regulation-sized underpass. The committee urged the federal Department of Transport to undertake the project as a winter work program this year.  The Harbour council resolution requested that the Canadian Pacific Railway subway be replaced by a more suitable subway to meet with present-day traffic conditions.