Seven persons were rushed to St. Andrews Hospital, Midland, after this station wagon went out of control on Highway 12, west of Victoria Harbour, yesterday at round noon hour. Six passengers in the vehicle were teen-age youths staying at a YMCA camp in the Port Severn district. 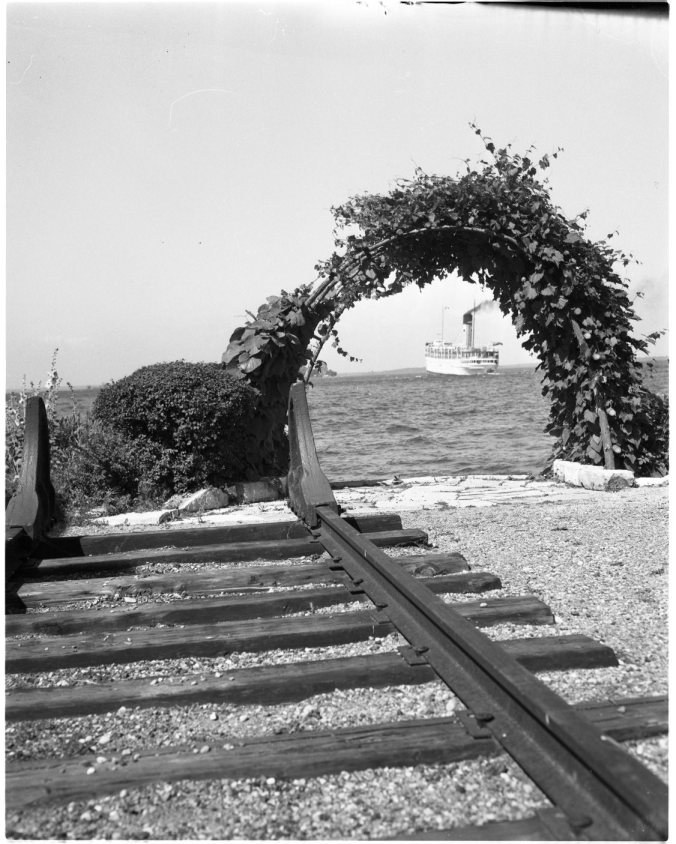 The Kee or the Assinaboia (the experts will know which) departing Port McNicoll on the weekly run to the Lakehead. Picture used on the editorial page with the caption “She Was Framed”.

Never before has Midland harbour seen so many fine cruisers, of 28 feet or over, as have visited here this year. Already 76 have been registered, almost double the entire quota last year. Some of the cruisers from the Port Huron, (Mich.) Yacht Club, which arrived here last week, are pictured in the two photos above.

At the age of 72 blacksmith William Steer retires from the Simcoe elevator. His dad’s original smithy is set up in the backyard of his home at 300 Manley Street where he has lived since 1917. Born in Wyebridge his story is told in an accompanying article.

Huronia House Museum is well on the way to setting a new record for admissions. The building was given a new coat of paint on the exterior walls and trim recently. Among the new exhibits at the museum this year are the Coutts-Hallmark collection of old time greeting cards and Frank Ridley’s collection of stamps from Red China.

Free Press headline of August 3rd, 1969.
Seven persons were sent to St. Andrews Hospital, Midland, at noon yesterday when a station wagon in which they were riding went off Highway 12 near Victoria Harbour, rolled over twice and finally leaped 33 feet through the air over a five-foot fence before coming to rest on its side. The vehicle, which contained the driver and six young boys, was proceeding from Camp Wa-Sa-Ah-Bun to Midland. The camp, operated by the St. Catharines YMCA, is located on the east shore of Georgian Bay, between Port Severn and Honey Harbour. Driver of the station wagon, 18 years of age from Welland, has been charged with careless driving.

County Herald headline of August 5, 1960
Heavy property damage was recorded in two accidents investigated by Victoria Harbour detachment of the OPP Tuesday. One of these, a collision between two trucks on Highway 12 between Coldwater and Waubaushene, accounted for $12,000 in damages alone. Another $900 was chalked up in a one-car accident on Copeland’s Hill, near Penetang. Sgt. Blake Ball investigated the collision between the two trucks which occurred around 3.40 p.m. Tuesday. Involved were a dump truck and a refrigerated ice-cream truck.

Barring earthquakes, wars or other unforeseen calamities, Midland Y’s Men’s Indian village seems certain to set a new attendance record this year. When the gates closed Monday night following the long Civic Holiday weekend, more than 20,000 persons had already visited the village set up by Dr. Wilfrid Jury of the University of Western Ontario to portray the life of the Huron Indians in these parts 300 and more years ago.

Announcements to be made in the dining room of Camp Kitchikewana are no longer a problem. An amplifying system has been installed. The system is the gift of an old camper and staff member, Gowan Scarlett of Toronto. It consists of two large speakers, a crystal microphone and allied equipment. The installation work was done by Mr. Scarlett who conducts that type of business. Gowan grew up in Midland and his father, Tom Scarlett, was the original chairman of the camp committee set up in the early days of the Midland YMCA. Known as “Kitch” to campers of his day, Gowan was one of the young campers in the first season of the camp. Later he was maintenance man and operator of the camp boat “Marion” for several seasons. His son John attended camp this season for his first year.

Appearance of Penetang’s old town hall is being changed considerably as workmen dismantle the tower which held a flag pole, fire siren and the old fire bell. When the flag pole was being removed a couple of weeks ago, it was discovered beams in the wooden structure had rotted away, leaving the tower in an unsafe condition. Plans call for removing the entire wooden portion down to the level of the brick walls. A roof will be built on this part, and the siren installed there. While work on the tower is progressing the siren has been placed temporarily on the roof of the Dominion Store. No decision has been reached on disposal of the old fire bell. Since the installation of the, siren a number of years ago, the bell has been used only to sound curfew at 9 each evening. During the past year, after the police offices were moved from the old town hall, even ringing of curfew has been discontinued.

An emergency trip by Georgian-Bay Airways plane may have saved the life of 12-year-old Bill Couling on the weekend. Son of Harry Couling, lighthouse keeper at the Western Islands, and Mrs. Couling. Bill suffered a severe attack of appendicitis—on the Island, about 20 miles out in Georgian Bay from Midland. High winds and rough water made it impossible for Mr. Couling to get his son out by boat for medical help. Finally on Friday Mr. Couling  got a message through to the airways by radio telephone and pilot Guy Larocque was  despatched to see what he could do. Mr. Larocque was able to get his plane down in somewhat calmer waters in the lee of the island and Bill’s father was able to get him out to the plane by small boat. After some difficulty, young Bill was loaded safely into the plane and rushed to St. Andrews Hospital, where he was operated on by Dr. D. C. Swan of Midland. Officials said the lad arrived at the hospital with not too much time to spare to avoid serious complications.

Work started last week on the construction of a new warehouse and tank farm for the British American Oil Company in Penetang. According to Robert Stewart, it has become necessary to expand existing facilities. As no more land was available at the present site used by the company, a new site on Robert Street W., was purchased from the town. It will permit any future expansion the firm may contemplate.

Tom Heels —member of the OPP detachment at Victoria Harbour for the last six years, resigned last week. Mr. Heels had also served two years on the Midland Police Department prior to joining the provincial force.

Provincial Police from Victoria Harbour detachment organized an air search Wednesday morning in an attempt to find a Toronto family reported missing on a fishing trip out of Thunder Bay. While the search was still in progress, the missing people turned up at the Thunder Bay cottage they had left two days earlier to go on a camping trip to Beausoleil Island. Dr. R. A. Stubbins, his wife and three children – a girl and two boys – were reported missing Tuesday night by  Mrs. Urgel Pauze when she had been unable to find anyone around after several trips to the Stubbin’s cottage Monday and Tuesday.

Ten Years Ago
More than 150 rugs and quilts were displayed at the second annual  quilt and rug fair at St. Paul’s United Church, Midland. * * * Wm. A. Robinson, federal member for Simcoe East, was discussing with the federal department of labor suggestions for vocational classes for shipyard workers in this district. This retraining would help men to secure posts in other industries, it was stated. * * * A five to ten-year plan of capital expenditures to bring about the modernization of St. Andrews Hospital was requested by a representative meeting of leading Midland citizens in the Midland YMCA. * * * Hon. George Doucett, Ontario Minister of Highways, was hearing an appeal from Tiny Township council for an increase of S6,000 in provincial road grants. * * * An increase of one percent per loaf was made in Midland and Penetang branches of chain stores on bread marketed under the chains’ own brand names. The hoist was from 12 to 13 cents per loaf of unsliced bread and for 13 to 14 cents for sliced. * * * Francis Beer, former manager of Fine Silk Mills, Midland, died following injuries sustained in an automobile accident near Georgetown. * * * Maps of North Simcoe watersheds were prepared by the Ontario Department of Planning and Development to be used by municipal councils in the district in connection with the possible establishment of a conservation authority. Under this plan it was proposed to encourage reforestation on a wider scale.

Wise and Otherwise
If provincial Department of Transport officials were forced to endure some of the traffic tie-ups and congestion at Midland’s King and Yonge Streets, they might be more amenable to the installation of traffic lights at this intersection. Street markings are an improvement but lights are the ultimate solution during the summer months at least.

Penetanguishene council has indicated that it is quite concerned over the state of tax delinquency in the municipality, and rightly so when one considers that the per capita tax arrears in the community are nearly triple the provincial per capita average of $6.

The 12-month farm accident survey Summary for North Simcoe has just been released. A total of 134 farm and farm home accident reports were forwarded for the 12-month period and these accidents resulted in eight fatalities, one permanent injury and 118 temporary injuries. More than 1,650 days’ work were lost as a result of the accidents and the medical costs and property loss totalled more than $64,000, that is close to $8,000 per township, or the value of a small farm. by STEWART L. PAGE North Simcoe Agrep.