St. Andrew’s Hospital cornerstone “well and truly laid” by the Hon. MacKinnon Phillips, Minister of Health for Ontario. Others in the picture are L to R; Stan Jordan, bricklayer foreman  Bert Oxford and Rex Timms all members of the R. Timms Construction and Electrical Ltd., the contracting firm. Comparatively good weather for mid December blessed the event, the same weather that has helped in the progress on the building. 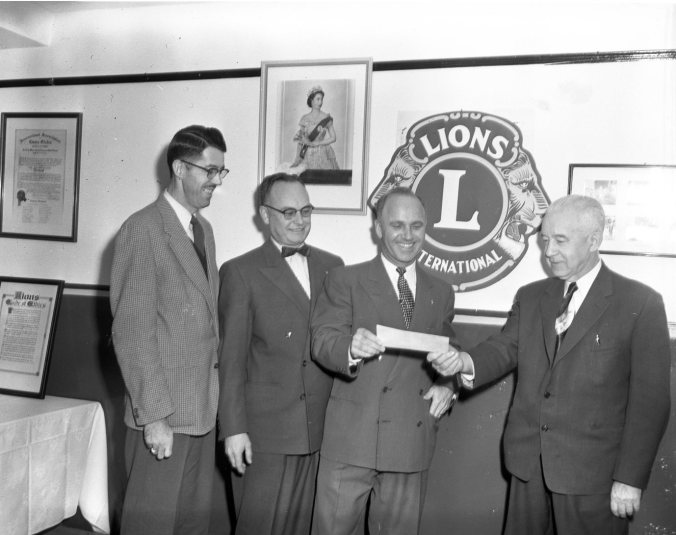 70 railcar loads of Christmas trees shipped from Penetang and 10 from Midland averaging 1300 trees per car, a total of 103,000 trees have been loaded for mostly USA destinations.

Santa Claus  –  Old and young throng King Street on Saturday morning to greet Santa Claus. The jolly old gent is shown waving at the crowds as he prepares to leave his sleigh and enter Edwards Specialty Shop. Second photo, flanked by two helpers, Carol Parizeau on the left and Marlene Fraser,  Santa beams merrily.  Santa will listen to the pleas of 2500 children on his throne in Edwards Toyland.

Midland’s Junior Redwings members, Bruce Calvert, Jim Lemieux and Joe Faragher. All played juvenile hockey last season although Calvert was called up to help the Wings in their final drive for the championship.

Free Press tradition to publish news from local communities in North Simcoe some of which no longer exist. The happenings, mostly social from places like;

Christmas mail rush is on. Bob Goatcher and Armand Marion wade through stacks of cards and letters.