Music by the Midland Citizens Band drew generous applause from the passengers and crew of the South American when the big white cruise ship docked in Midland June 19. Most of the guests were members of the Cleveland, Ohio, Chamber of Commerce. It will be the only visit of the year by a big cruise ship to Midland, which not so many years ago was accustomed to seeing as many as three tied up at the dock at the same time. (The photo in the paper was much better but the negative has disappeared, a common thing with important events like Hurricane Hazel and ship launchings.) 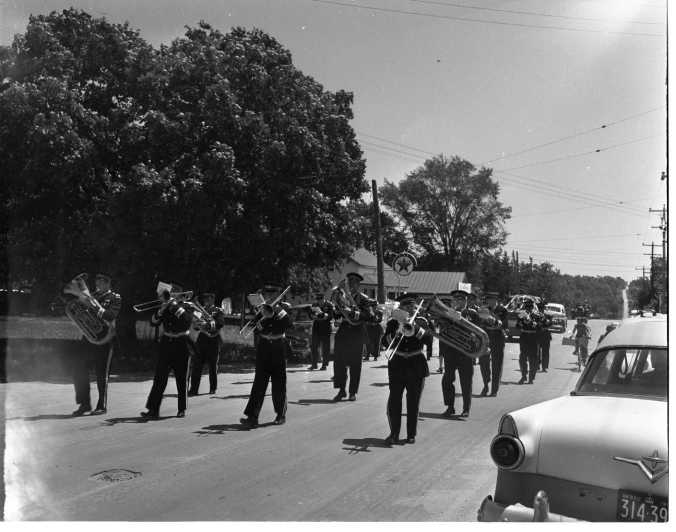 Fresh from their victory at the Waterloo Band Festival Saturday members of the Midland Citizens Band march down a street in Waubaushene Monday afternoon. The Midland band led the regatta day procession. (Looking south up Sandhill Road.) 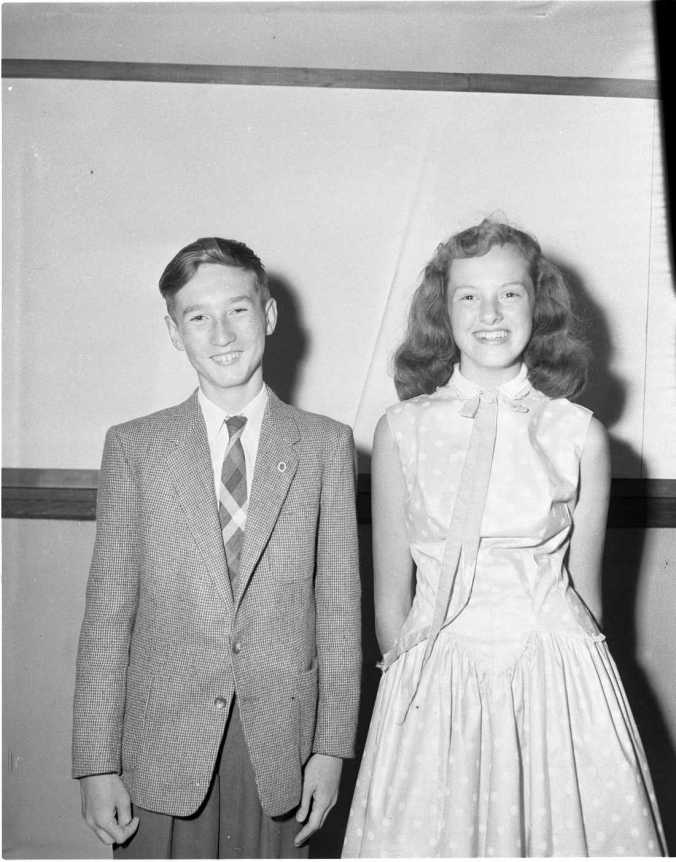 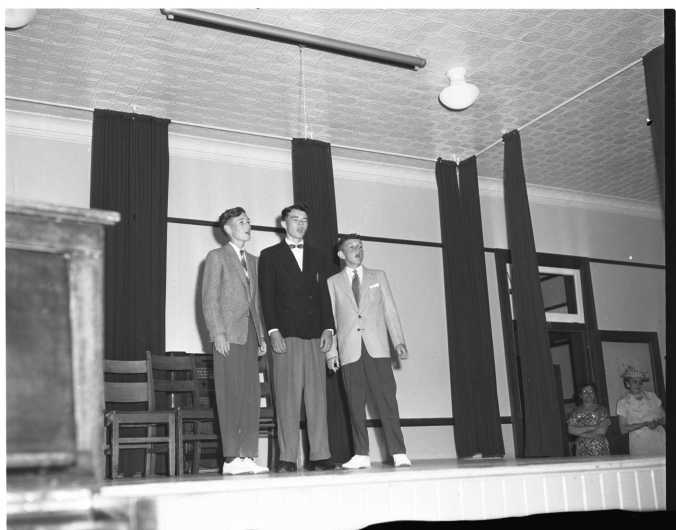 A trio of Regent School pupils provided a popular item on the program during public school graduation ceremonies at Parkview School last Monday. Making like the Crew Cuts’ are Winston Schell, Kevin Rogers and Harry DeVries. (The newspaper cropped many of these photos, this one only showed the trio from the waist up. We like to show the whole photo so that you can say “I remember that stage” or  “that pull down screen” or “those black curtains at Parkview”. )

Leering medicine man lends atmosphere to the Y’s Men’s Indian Village this year. The crooked face represents an old Huron legend about a battle between the good and evil spirits. The good spirit told his enemy to turn around, which he did. When the evil spirit turned around again, the good spirit had caused a mountain to appear between them, and the evil one smashed his face on the side of the mountain. 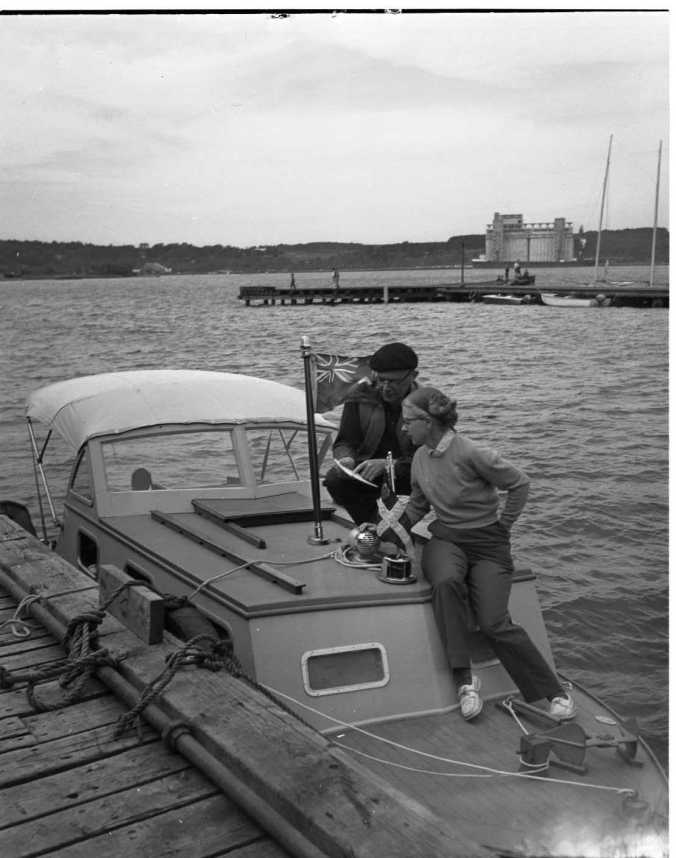 Damage caused by the remains of Hurricane Audrey. A car owned by Midland postman Alf Scott suffered severe damage when it was struck by this large Maple limb on Elizabeth Street near the Post Office. 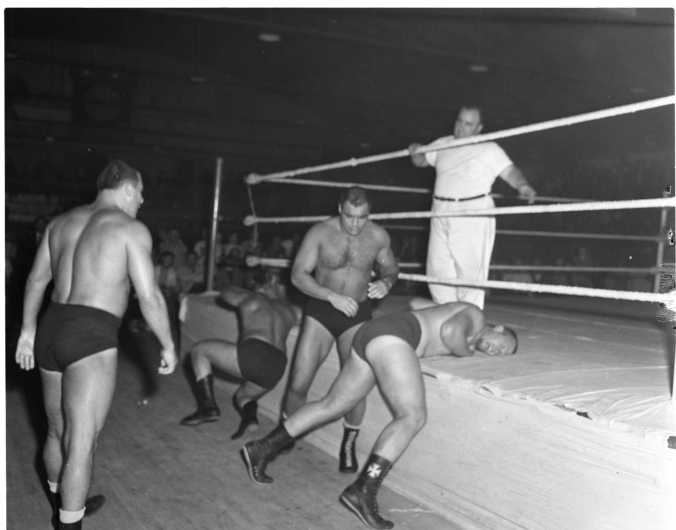 Fans question a call by the referee at a wrestling match at the Midland Arena Gardens. Lots of action during these popular events.

Popular with the younger set at least is Yukon Eric shown here signing autographs for a group of children grouped around his corner of the ring. The bouts were held each Monday evening with proceeds going to finance minor hockey in Midland. 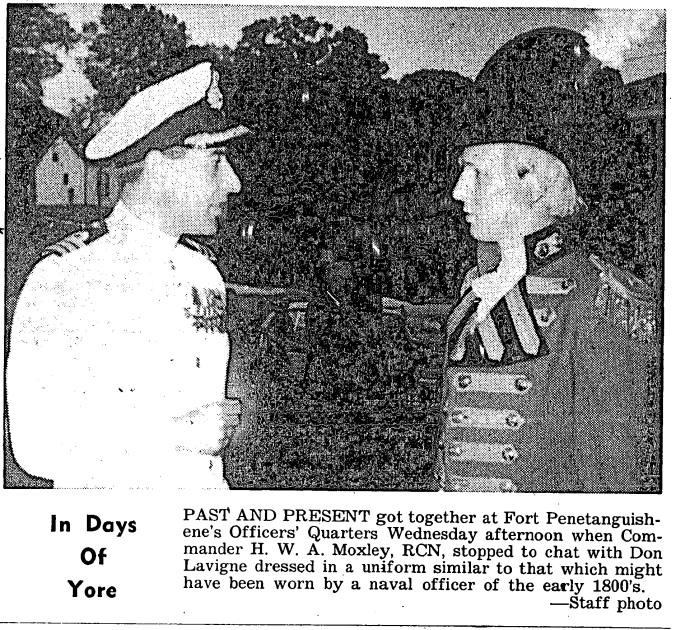 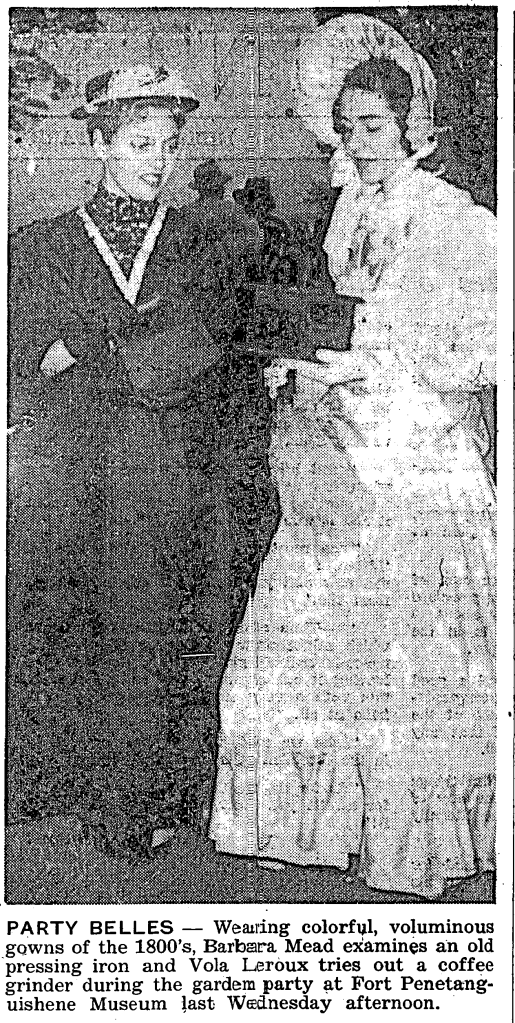 Huronia Museum is pleased to announce that it will be hosting the first annual “Pass it On” Storytelling Festival on August 22nd, 2015 in Little Lake Park from 10 am to 4 pm.

The Pass-It-On Storytelling Festival aims to create experiences of discovery and delight through the art of storytelling.  Huronia Museum is taking a leading role in heritage preservation by bringing first-class local and guest storytellers to the people of Huronia to engage in one of humanity’s earliest art forms. The museum ultimately places to an ongoing, annual festival that enriches the hearts, and minds of our community.

Visitors to this first annual storytelling festival will enjoy two storytelling venues in Little Lake Park.  Stories can be heard from the Rotary Stage and in the museum’s own Huron Ouendat Longhouse.  Visitors can expect a special performance in the afternoon by the Bicycle Opera, an opera company which travels to communities solely by bicycle.   A children’s craft area for little story listeners will also be located within the Festival pathways.   Vendors, other performances and food services by  ELM Catering will also be located in Little Lake Park on the day of the festival making it a reason to come to Little Lake Park and stay for the day.

Huronia Museum is a not-for-profit charity, which collects, preserves, exhibits and educates on the history of Huronia.

Join the four siblings of the Métis Fiddler Quartet on a musical voyage across the trade routes of the Northwestern frontier.  Clap, clog, jig and sing along with this young, award-winning group and discover the history of the Métis people in Canada through the aboriginal fiddle traditions passed down by elders from across the country.

In the Ouendat Village of Huronia Museum.

Presented by Brookside Music Association.  Sponsored by the Tourism Midland.