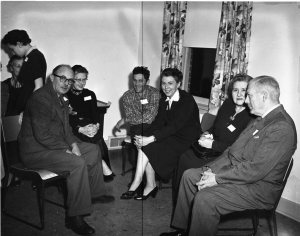 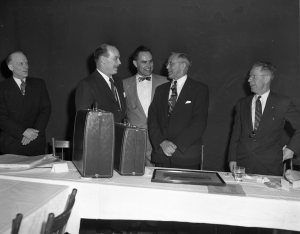 Veteran Superintendent at Tiffin retires, Charles A. Flowers started his railway career in 1918 and has been Superintendent since 1938. He noted that when he started most ships carried 150,00 bushels of wheat, last July the S.S. Scott Misener arrived with 750,00 bushels. Elevator was enlarged in 1923 to its present capacity of 4.5 million bushels and in 1945 it handled a record 30 million bushels. Left, Albert Hill the new Tiffin superintendent, Leonard Galloway superintendent of motive power from Toronto, Pearson Flowers son of Charles, Mr. Flowers and unknown.