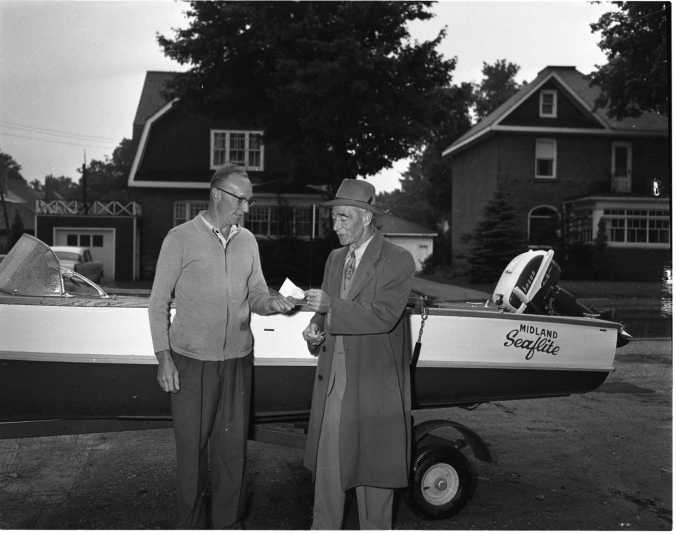 It was a lucky thing for Ed Thorne, left, that his wife attended the Lions Club bingo in Midland last Tuesday night and bought tickets on the boat and motor the club was raffling. One of them proved to be the winner and Mr. Thorne can be seen accepting his prize from Harold Humphries, 1st Vice-President of the Midland club. The Thornes operate a tourist camp in Orillia.

The Midland Golf & Country Club held their annual juniors competition Saturday. Susan Swan, daughter of Dr. and Mrs. D. C. Swan emerged as the top girl with David Bertram taking home the Gordon Moss trophy for boys, for the third year in a row. Happy with the results is club pro Mark Sandow, center, who has operated a junior clinic at the club for several seasons.

Work on the new junction of Highways 12 and 27 and County Road 6 is nearing completion. The car in the foreground is heading East into Midland from Balm Beach Road, Cty. Rd. 6. 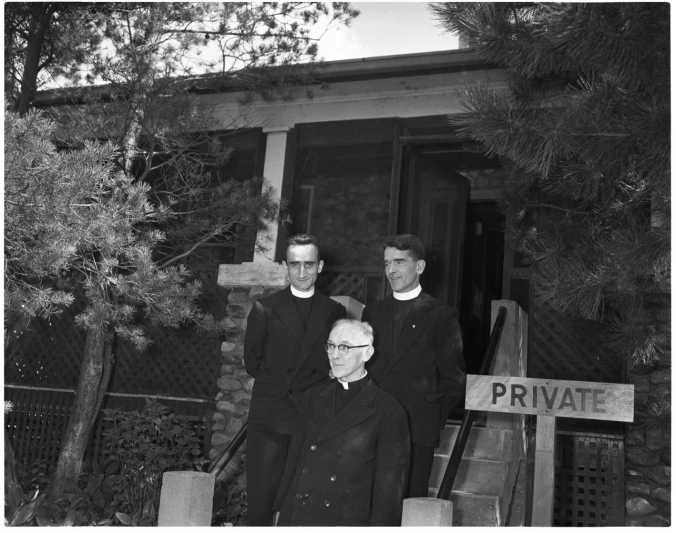 Jesuit scientists. Standing on the steps of the rectory at Martyr’s Shrine is part of a delegation of eleven Jesuits who attended the 11th general assembly of the International Union of Geodesy and Geophysics at the University of Toronto from September 4th to 14th. In front is Rev. Walter Burke- Gaffney, S. J., Canadian astronomer and leading authority on Kepler, now on the staff of St. Mary’s University, Halifax. Back row, Rev. Jean-Paul Mayaud, S. J. Paris, France, who spent 18 months in the Antarctic with a French polar expedition and Rev. R. E. Ingram, S. J., an Irish seismologist. 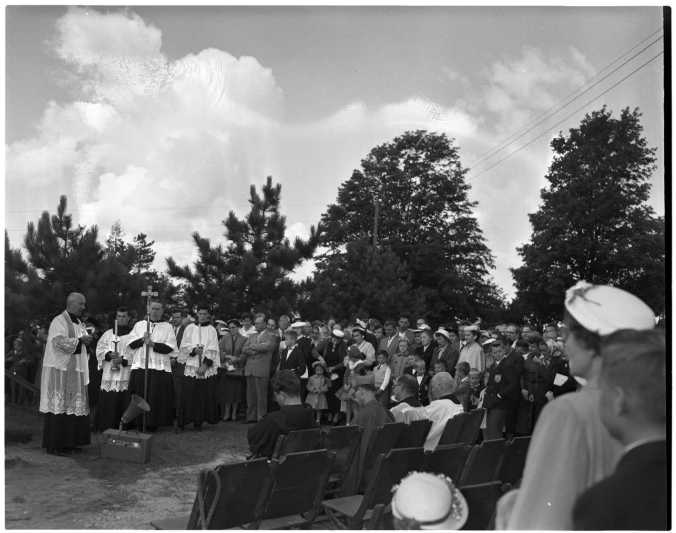 Nearly 300 Canadians of Lithuanian descent listen to a talk in their native language, given by Rev. J. Gutauskas following the dedication of a cross at the Martyr’s Shrine Sunday. Cross was erected as a memorial to Lithuanians killed and persecuted by the Russians.

This massive Lithuanian wayside Cross was dedicated at Martyr’s Shrine on Sunday by Most Reverend F. A. Marrocco, auxiliary bishop of Toronto, as a memorial to Lithuanian clergy and lay people martyred since Soviet occupation of the country in 1940. Examing the 27-foot high cross are Rev. J. Gutauskas of St. John the Baptist parish, Toronto, Rev. J. F. McCaffrey, shrine director and Rev. P. Azubalis of St. John the Baptist parish.

High winds last week are believed to have been the cause of the sailboat “Mary Anne,” belonging to RCSCC “Huron,” sinking in the slip nearest Midland Shipyard. Only the two masts of the vessel are above water when this picture was taken. The rest of the boat can be seen just below the surface.