CITY OF DOVER RETURNS TO MIDLAND

New Sault Ste. Marie owners decide 30,000 island area better bet than the northern run planned between the Sault and Michipicoten. Dover will run daily, three hour cruises from Midland but will not carry freight or make scheduled passenger stops. Evening cruises are planned as well. Captain Anson Smith has been engaged to return the Dover to Midland.

Remember those area news columns (gossip) in the local paper:

Elmvale – Mrs. William Watson is spending a few days with her mother Mrs. Martin Beardsall, Mr. & Mrs. E. Arthur Copeland were in Toronto last Thursday to attend the convocation at Osgoode Hall when their son Robert who received his degree of barrister-at-law and was called to the bar, etc. 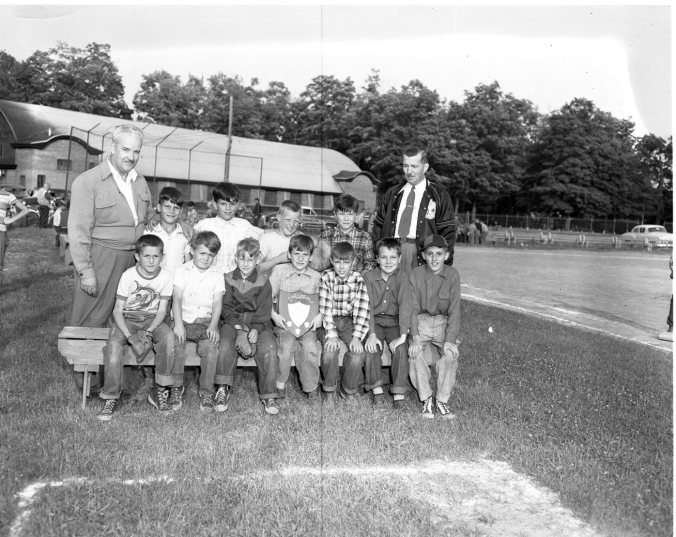 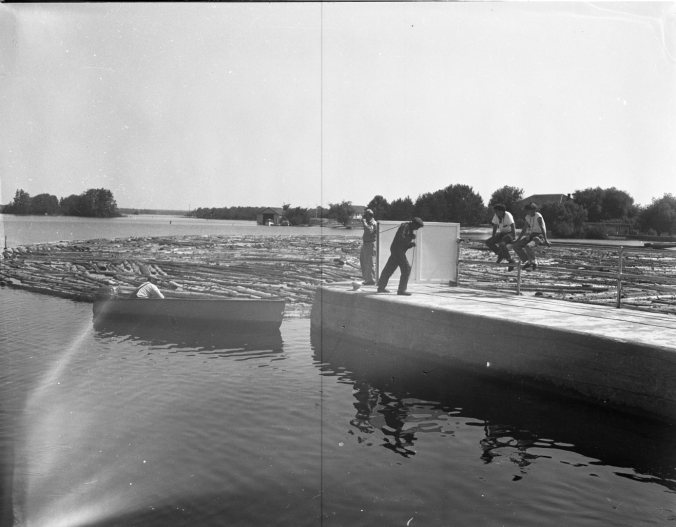 First large raft of logs to be put over the dam at Port Severn in more than a decade was run through by Ed Copeland, a Midland sawmill operator. Mr. Copeland is in the boat, foreground on the dock is Joe King of Port Severn a veteran of many river  drives years ago. The raft contained around 4,000 poplar, hemlock, pine and basswood logs cut in the Six Mile Lake area. They were towed across the bay to Port McNicoll for transportation to the mill.

Capt. and Mrs. Albert Lavigne celebrate 50 years of marriage on June 6th. Albert was born one of 14 children in a log home on Concession 7, Tiny Township near Perkinsfield in 1881. Albert was schooled in French at Perkinsfield but the family moved to Muskoka Mills when he was about nine, his dad caring for the horses for Andrew Miscampbell. Their new school was all English and Albert and his  brother Olivia had to start over. The Lavigne’s moved back to Midland eight years later where his dad worked for Mr. Playfair and the children attended the old wooden school on Manly Street. Captain Lavigne began his sailing career  around the age of 19 on an American ship the W. P. Thew, earning $45.00 per month.  After his season on the Thew Alfred worked for Playfair rolling logs for fifty cents a day. When Playfair built the tug Magnolia Albert got to help and when it was launched in 1901 he went on as a deckhand. He worked his way up, fireman, wheelsman and finally mate under Captain Sandy Cuffe. In February 1916 Albert passed his exams as a tug master and also has his mates papers on passenger ships. His first tug was the McAuley for the Canadian Dredging Company. He also served 12 years as master of the Glenbogie and was also master of the Laketon for some time. He has been called out of retirement many times to fill in, even this year he was called to take the City of Dover to Sault Ste. Marie.

Mrs. Lavigne, the former Elizabeth McDonnell was born in Sturgeon Bay the youngest of the eight children of Mr. & Mrs. Allan McDonnell. The families lived side by side on Mill Street in Midland as both fathers were long time employees of Mr. Playfair’s and the children attended the Manly Street school. They were married at St. Margaret’s on June 6th, 1905 and their first home was on Mill Street but for 30 years they have lived in the big brick house at 278 (302) Manly Street that was built for Albert’s father Joseph Lavigne. The couple have four children, three boys followed their dad’s career on the lakes, Cyril and Joseph of Midland and Alvin in Marathon. Daughter Madeline, now Mrs. Albert Asselin, lives in Victoria Harbour. 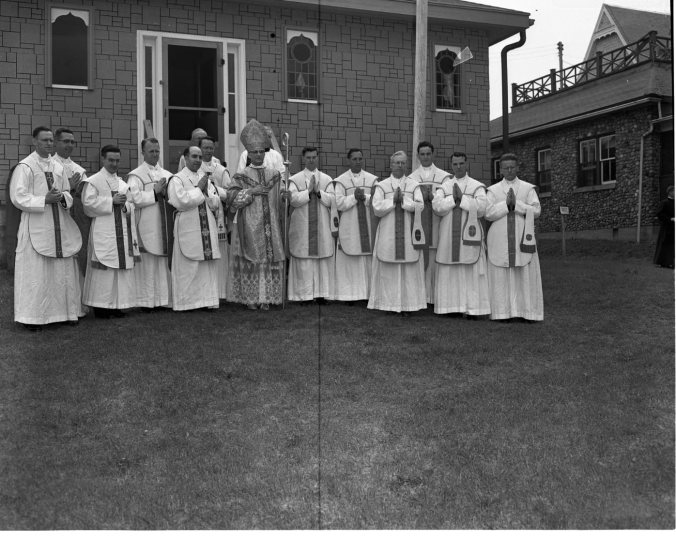 Young priests ordained at Shrine. Marking the 25th anniversary of the canonization of the Canadian Martyrs, twelve young priests were ordained at the Shrine. The ceremony was performed by His Excellency Most Rev. Francis V. Allen, DD, Auxiliary Bishop of Toronto. The new priests were from Ontario, Quebec, New Brunswick, New York, Massachusetts and Hungary.

– At this time the Delewana Inn at Honey Harbour was publishing weekly the names of their guests and if from Ontario also included their address. Banquet and service club names were also listed, such as the Penetang Separate School Board meeting June 6th and the Public School Teachers of Midland June 13th.

– Penetang Water & Light Commission authorizes employees to immediately turn off the water supply to any resident watering their lawn during restricted hours, service to be resumed upon payment of fines

– Don Messer Show featuring Marg Osborne, Charlie Chamberlain and Duke Neilson – plus- an evening of round and square dancing with Don Messer and his Islanders. Midland Arena Tonight at 9 PM

– Roller Skating at the Arena every Wednesday, Thursday, Friday and Saturday