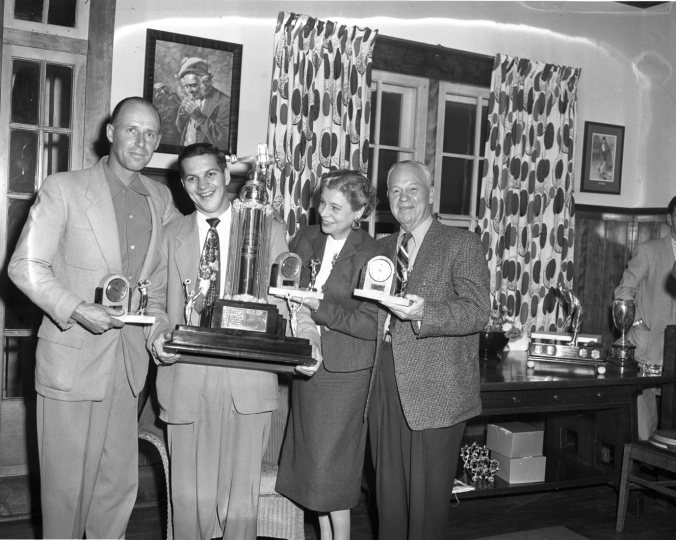 Midland Police  have moved from their location of the last fifty years in the old town hall on King Street to a temporary location in the Pratt building on Bay Street. Constable Ray Atkinson takes a call at his new desk, only complaint, no heat yet.

Pair win Pinchin Trophy. Newest trophy at the Midland Golf & Country Club has been donated by Dr. A. H. Pinchin, center, and is presented to Mrs. Jim Thomas and Bill Hack winners of the mixed two ball. 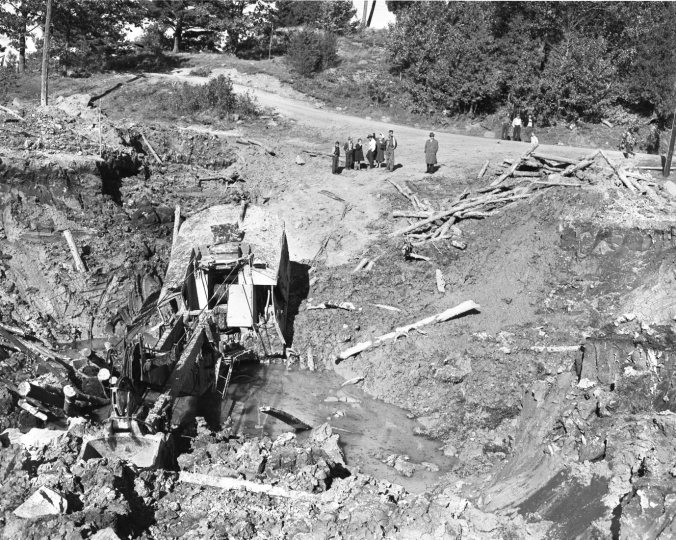 Fifty six ton excavator got in too deep, construction workers on the Trans Canada Highway 5 miles north of Port Severn worked day and night for ten days to free the unit from the mud that almost completely buried it.

Art Bath, veteran Midland business man tries out this 1860’s steel wheeled, wooden seated bicycle. Eric Eisenburg has it on loan from one of his bicycle suppliers and featured it at the recent fall fair.

Serious threat to fishing in the North Simcoe area, Sea Lamprey Eels have attacked both of these rainbow trout caught in the Sturgeon River. Reg Smith and Pete Pettersen point to marks left by eels.

The devastating impact of the sea lamprey on Great Lakes sport, commercial and Aboriginal fisheries in the 1940s and 50s led Canada and the United States to form the Great Lakes Fishery Commission in 1955. Since then the commission has led a program to assess and control the species using measures that target different stages of its life cycle. These include chemicals that selectively kill lamprey larvae, and barriers and traps that prevent adult lampreys from moving upstream to spawn.

Although it is likely impossible to eliminate the sea lamprey from the Great Lakes, ongoing efforts to control the species have reduced populations by 90 per cent. Unfortunately, the remaining sea lampreys continue to affect native fish species.   (taken from http://www.invadingspecies.com)

RCSCC Huron got a new commanding officer Tuesday night when Lieut. Jack Harber, at the right, resigned from the post he has held since 1953, he has been a member since 1943. Sub-Lieut Robert McLeod is taking over.

Mrs. James Dalziel died September 8th in her 97th year. She was born Edith Maud (Amanda) Archer in Elmvale, November 6th, 1858 and received her education there. She lived in Elmvale and Hillsdale for 52 years and the last 45 years in Midland. Lakeview Cemetery.

A life well lived.
A lifelong resident of Midland, Frederick Hill, died September 14th in St. Andrew’s Hospital. Mr. Hill was born on July 8, 1881, in a house on the property now occupied by the Alliance Tabernacle. He received his education in a wooden four room school on the site now occupied by Glen Mawr Frocks Ltd. At thirteen he quit school to help his father, the late Joshua Hill, operate the old American Hotel, then located across the street from the IGA store on King Street. The Hills ran the hotel from 1893 until 1903. After the hotel was sold Fred worked on a gold mining claim in the Haileybury area with the Turnbull brothers of Victoria Harbour. Later he worked for two years in the men’s furnishings department of the Playfair Preston Store. The Hills, junior and senior, acquired a 33 1/3 square mile timber site in the townships of Freeman and Conger on the Moon River in 1908. The company was first known as Hill and Demorest and was later changed to the Freeman Lumber Co. Ltd. A sports enthusiast, Mr. Hill played junior hockey, lacrosse and other sports. He speedskated and won several bicycle races. In 1942-43 he skipped one of the two rinks which brought to Midland the only provincial championship, the Governor General’s Trophy. Del Hastings skipped the other.  On February 14, 1912 he married the former Lena M. Garbutt in Arthur Ont. He was a member of the United Church and served several terms on Midland Council, including terms as Reeve and Deputy-Reeve. He is survived by his wife and two sons, Bert and Stanley. One son, Lawrence, pre-deceased him in 1938. Internment, Lakeview Cemetery.