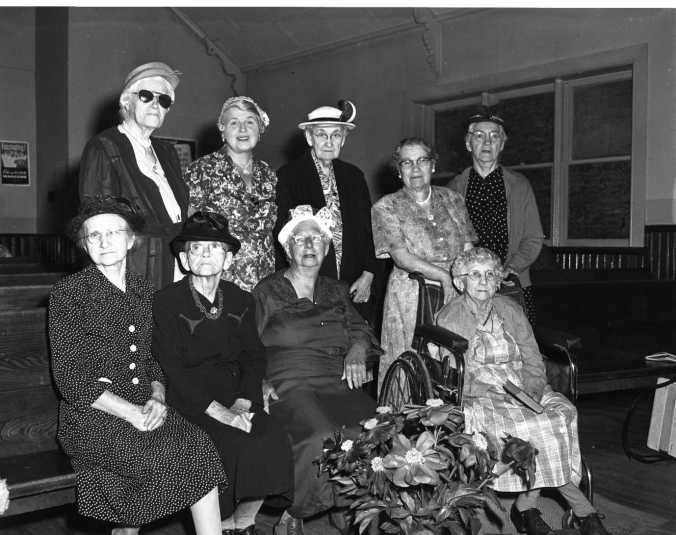 Getting ready for the wedding are these members of the Elmvale School of Ballet, pictured at a dress rehearsal Saturday morning. The bride at center is Mary Corbett and the attendants are Betty Trace left, and Adele Caesar. Mother of the bride is Nan Roberts, instructor at the school for the last four years.

Elmvale School of Ballet is holding a recital at the Elmvale Community Hall and these two fire flies are in it. Nan Roberts is the instructor for the ten pupil class and mother to Nancy, center, and Carolyn. Piano pupils of Mrs. W. W. Shaw will also be taking part. 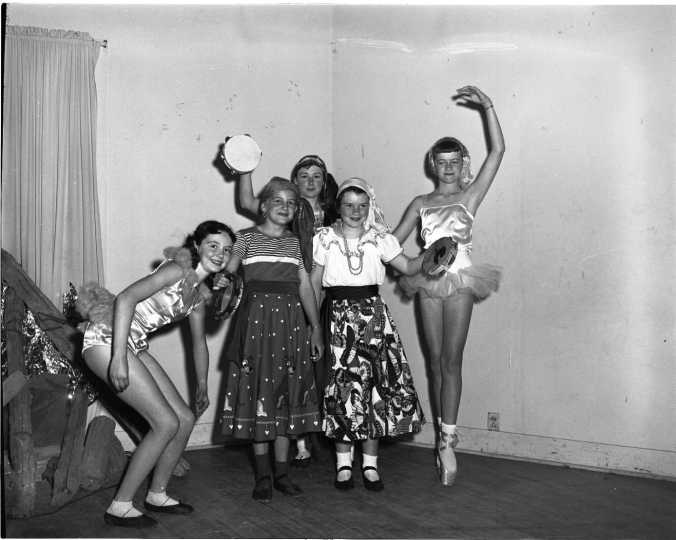 This photo, connected to the previous ones regarding the Elmvale School of Ballet was not used in the newspaper leaving us with no description, but with the power of the internet  we were able to contact a relative from Elmvale who was living in Vancouver and discovered an interesting twist to the story.

Adele Caesar is the girl bending down (far left) and Betty Trace is the girl endpoint on the far right. Dad says he thinks the girl next to Adele is Mary Corbett. ( he’s sending it on to his sister Nancy to check,  I’ll let you know). This is where it gets good. The ‘girl’ in the front row with the tambourine is actually my uncle, Bruce Roberts, and the ‘girl’ standing behind him in the back row with the tambourine, is my dad, Douglas Roberts. Apparently gran (Nan Roberts) used to make them join in when they were short on girls! If the photo is from ’56, then dad was 11 and Bruce was 7 or 8. 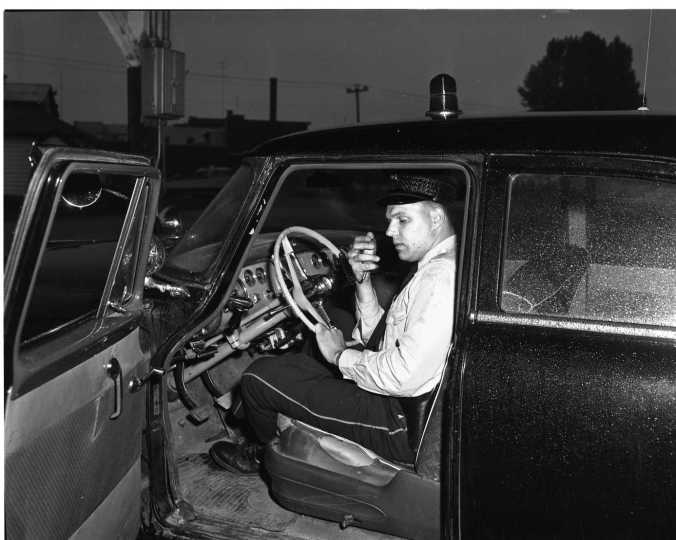 Constable Ernie Bates who is parked at the town dock demonstrates the new two way radio system as he communicates with police chief Robert Cameron. Radios have a range of 25 to 30 miles. (The actual photo in the paper included a photo of chief Cameron on the phone, one the paper had used the year before showing the chief working in his temporary office on Bay Street, not on the radio with Ernie.) 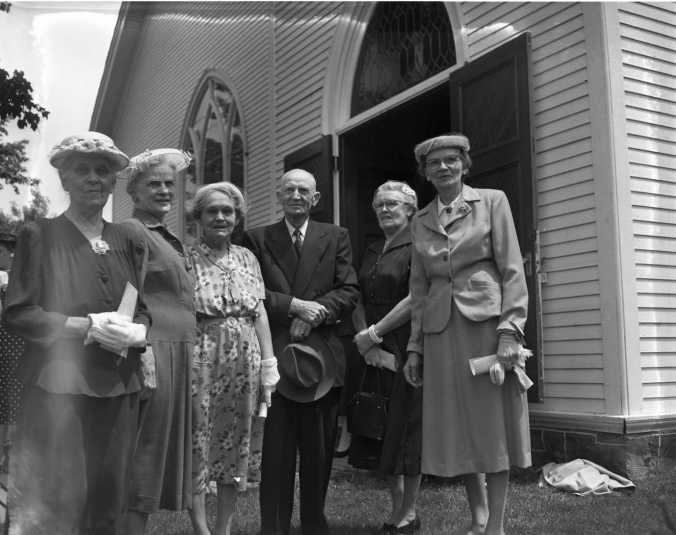 John Waldie Jr., son of the late John Waldie who was the  owner of the Victoria Harbour Lumber Company and who donated St. Paul’s Presbyterian Church to the village, is seen with his daughter after the morning service at the church. Behind are elders, Capt. W. A. Stewart and Douglas McNabb.

Rare blooms for this part of Canada, this rhododendron in the garden of Douglas Grant at 298 Midland Ave.(now 344) is the finest seen north of Windsor, states local florist Mac Perrin. The four year old plant requires heavy protection during the winter months. 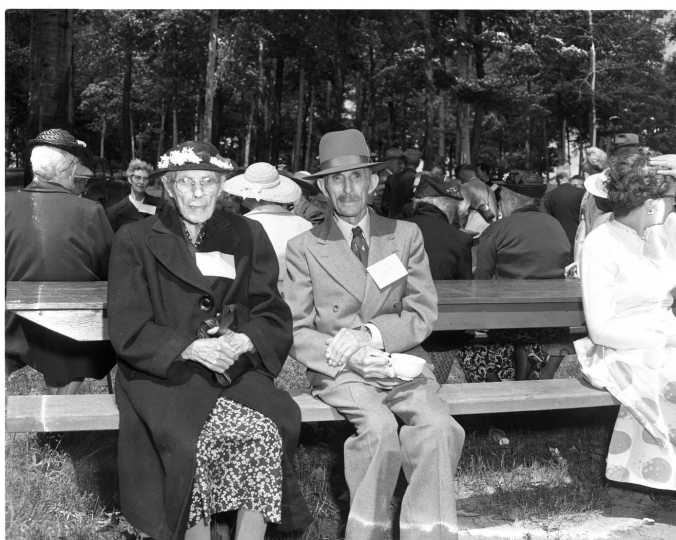 Two veterans of their communities were pictured at the annual CNIB picnic held at Little Lake Park Wednesday. Mrs. George Wyles, 91, of Barrie and William Archer of Elmvale, a healthy 92 year old. Mr. Archer, whose father was one of the first settlers in North Simcoe, comes from a family known for their longevity. 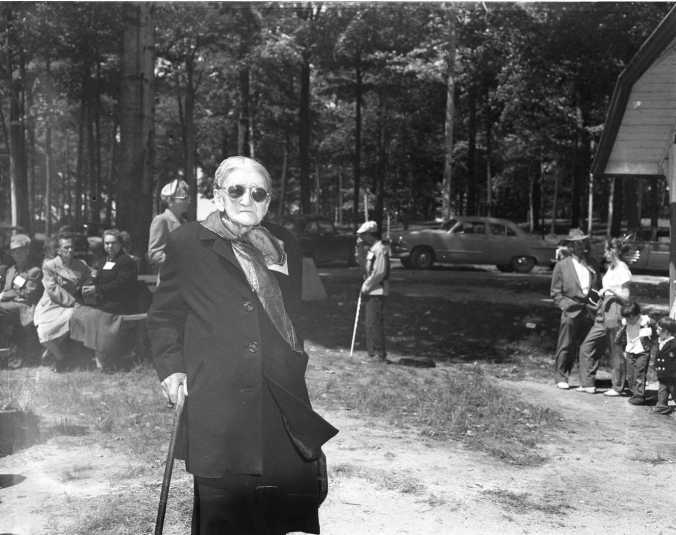 Loss of sight hasn’t diminished the spirit of this nonagenarian, one of the guests at the CNIB picnic in Little Lake Park Wednesday afternoon. Mrs. Sophia Hart of Craighurst, who marked her 95th birthday December 11th and who looks quite capable of hitting the century mark. Mrs. Hart is a member of one of the pioneer families of the district. 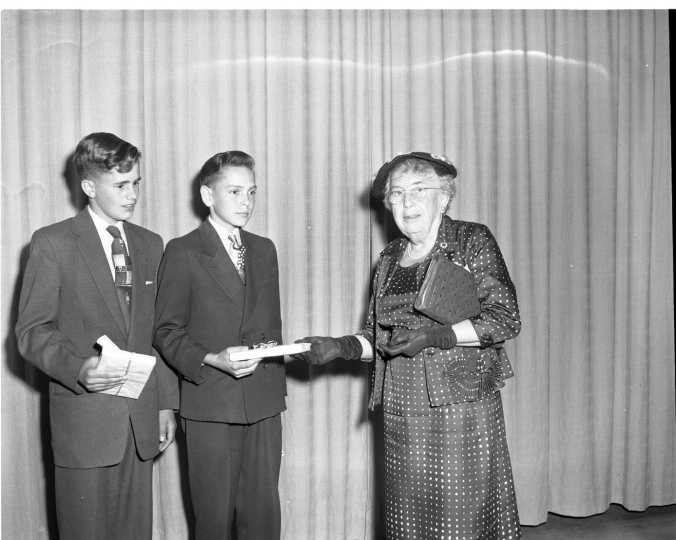 Veteran teacher in Midland public schools but now retired, Miss Ethel Wagg presented books on behalf of the Midland branch of the IODE to these two grade eight students from Parkview School at graduation exercises held in the Regent School auditorium Tuesday night. Award is given for the highest marks in social studies and the winners are Gerry Wittig (Mueller) and Wayne Farqhuar. 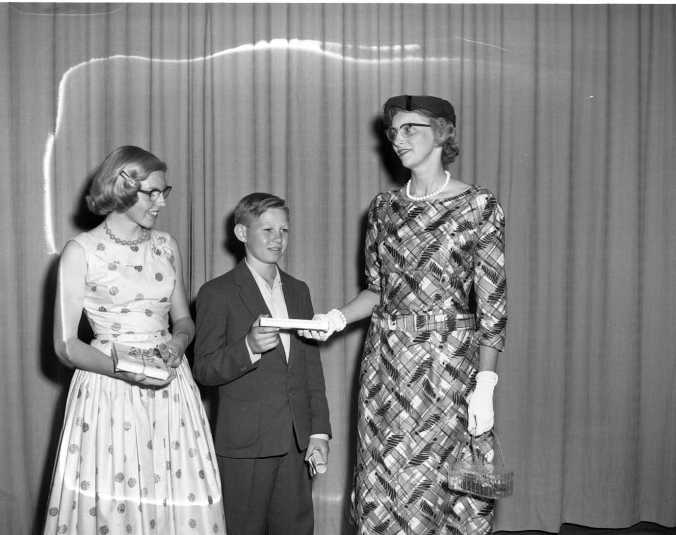 The highest marks in social studies at Regent School won awards from the Midland branch of the IODE, Mrs. Thomas Brandon presents books to Karen Blair and Ross Hebner during the graduation exercises held at Regent School. (Karen, and Gerry Wittig from the previous photo, married)

Visitor bubbles will be admitted every 15 minutes starting at 9 am each day. Visitors may choose to book a time by calling the museum at 705 526 2844 or emailing us at huroniamuseum@gmail.com.