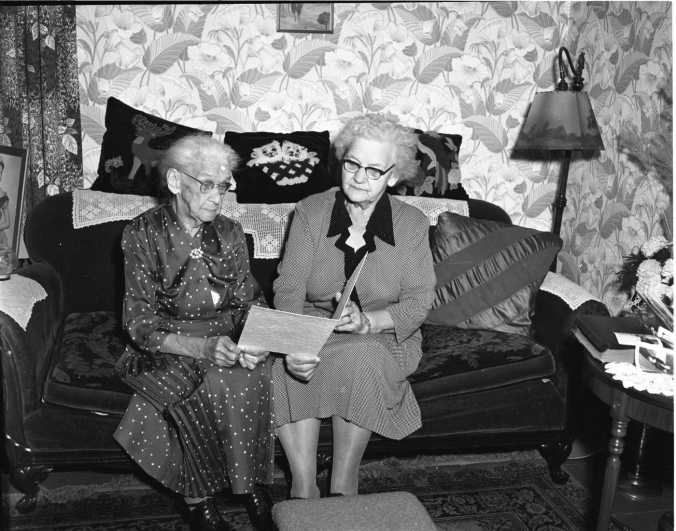 Mrs. John Hare, left, who celebrated her 93rd birthday November 25th, looks at pictures of her two great-great grandchildren with her daughter Mrs. R. J. Wilson of Waubaushene. Born four years before Confederation, Mrs. Hare had lived in Midland for almost 50 years before moving to Coldwater to live with her daughter. Married at 16 to John Hare, 19,  the couple moved to Midland where John managed a brick yard, helped build the Aberdeen Elevator and continued to  work there for several years, he also served on the Midland Police Force before his death in 1928. Of the thirteen children born to the Hares only three daughters and one son are still living.

Over 200 years of service to the CPR and its steamship service is represented in this picture taken aboard the S.S. Assinaboia at a dinner marking the retirement of Capt. Joseph Stewart Friday night. Front, Capt. Frank Davis, 83 and retired 18 years from Toronto; Capt. Stewart; S. H. Binns retired locomotive foreman for the Ontario Division, Toronto; back row, Tom Morgan, Port McNicoll, retired chief clerk; Louis Belanger, retired first mate; W. S. Struthers of Midland, who retired recently after 36 years, many as a chief engineer; W. A. Piitz, Penetang, retired first mate with 35 years of service.

Five day trip from Toronto to Port McNicoll turns into a twenty-one day adventure as these two tugs encountered bad weather. The tug “Sipat” under the command of Capt. C. Courtemarche of Midland left Toronto Nov 16th with the much larger tug David Richard in tow. The 130 foot “David Richard”, was once used to maintain navigational aids in the area and was called the “Murray Stewart”. The big tug is owned by the Waubaushene Navigation Co. and was manned by two employees, Leo Montgomery and Joe Brousseau. At one point on Lake St. Clair sixty mile per hour winds broke both tow cables. On Lake Huron more high winds caused a 12 ton winch to break loose on the David Richard. On Monday the big tug was moved to the Midland Shipyards where cranes removed equipment to make room for a new diesel engine to be installed at Waubaushene over the winter months.

Three members of the Midland Lion’s Club are seen in Gord Boyd’s basement refurbishing and sorting toys for distribution throughout the area at Christmas. Gordon Boyd, Cec Launder and Gordon Paice. 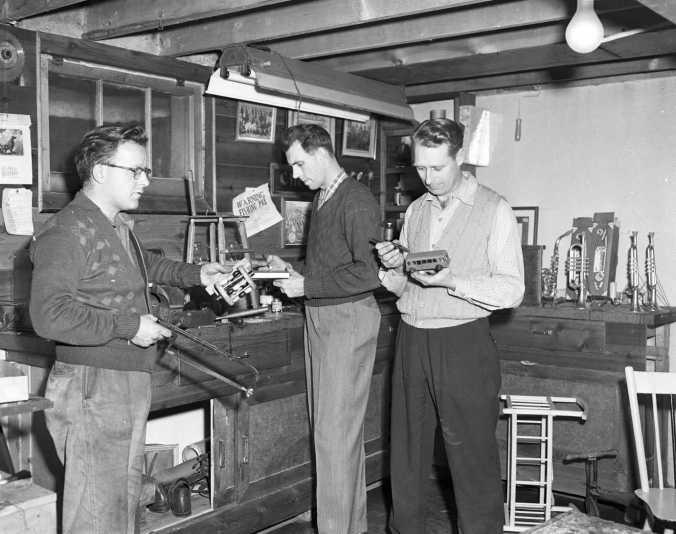 Dec 24th 1956, the Midland Penetang Advisory Committee of the CNIB Christmas party was held at the Midland YMCA,  Mel Lavigne with the fiddle and Bill Jivcoff. Pianist Ab Clarke is hidden. They all donated their time.

Appropriately dressed, Glen Nicholls reads from the works of Robert Service at a special assembly at MPDHS Thursday morning. Students of 12B acted out the Shooting of Dan McGrew. 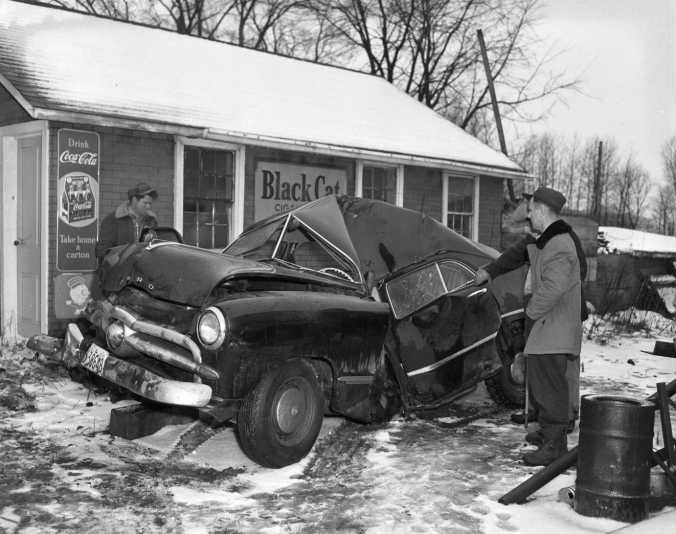 Cecil Parker, deputy Reeve of Tay Township, was instantly killed Friday night when his car slammed broadside into a tree on Highway 27. The accident happened on the first curve north of Waverly and a blown right front tire is suspected. The picture taken at Carruthers Garage in Wyebridge.

Industrial Safety in Ontario was the subject under discussion at an oratorical contest held Thursday morning at MPDHS. In the top photo the judges are Gordon Moss of Canadian Nameplate, Jan Ulrichson and Bryce Moffatt of Penetang. In the bottom photo are the judged, Hartmut Bezner, Sylvia Silvie the winner and Glen Mount. 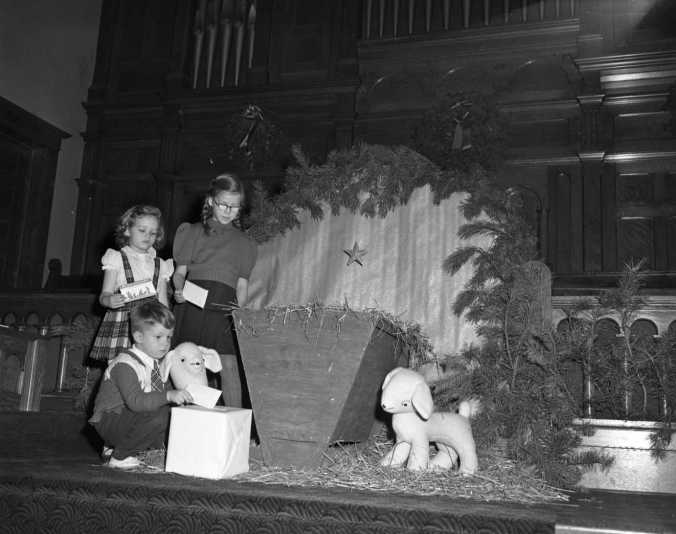 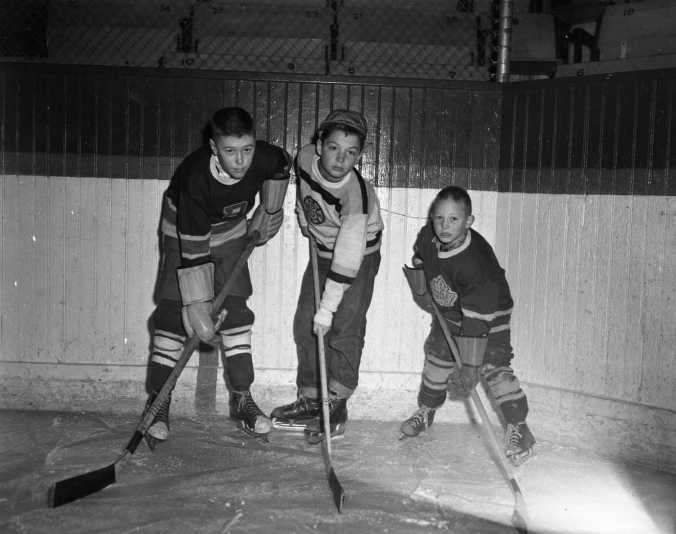 Five hundred Midland and Penetang youth wait eagerly every year for the Little Hockey League to open for the season. Typical age and size of the three groups are; John Argue, Toronto Leafs; Jerry Beteau, AHL Hershey Bears and Earl Scott, a whirlwind on skates for the Junior OHA Marlboros. 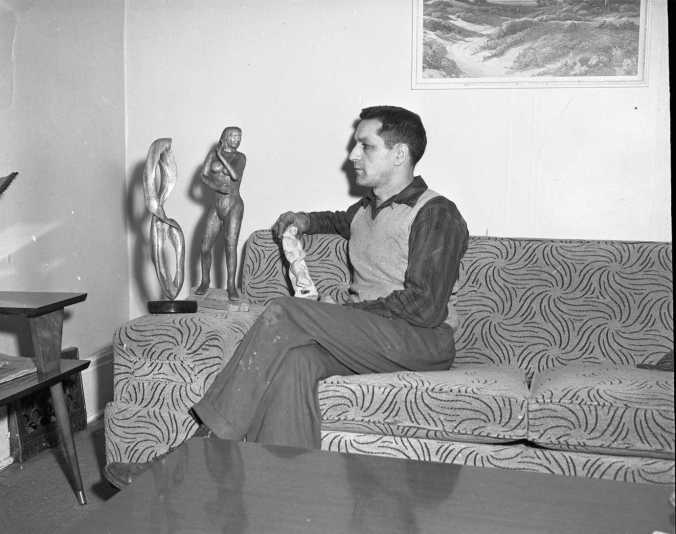 Woodcarving has proven an entertaining hobby for Frank Shulman of Midland, owner of Shulman’s Furniture. Here he is seen with three statues he created.