Almut Bezner of Midland is feeding a sardine h’odoeuvre to Lieut. George Wakeford of Owen Sound at a dance held at the Midland Armoury by the Grey and Simcoe Foresters Saturday night. Public relations officer for the regiment Lieut. Wakeford and other officers from Owen Sound are growing beards for a centenary to be held in that city.

Mayors of Midland and Penetang were among the guests of the Grey and Simcoe Foresters at a regimental dinner and dance at the Midland Armory Saturday night. Mayor A. B. Thompson, Penetang; Major and Mrs. D. W. Syer, Owen Sound; Col. And Mrs. D. B. McKee, Owen Sound; Mayor Charles Parker, Midland. In the rear, Capt. J. S. Corcoran, Midland and Major Jack Symons, Penetang. 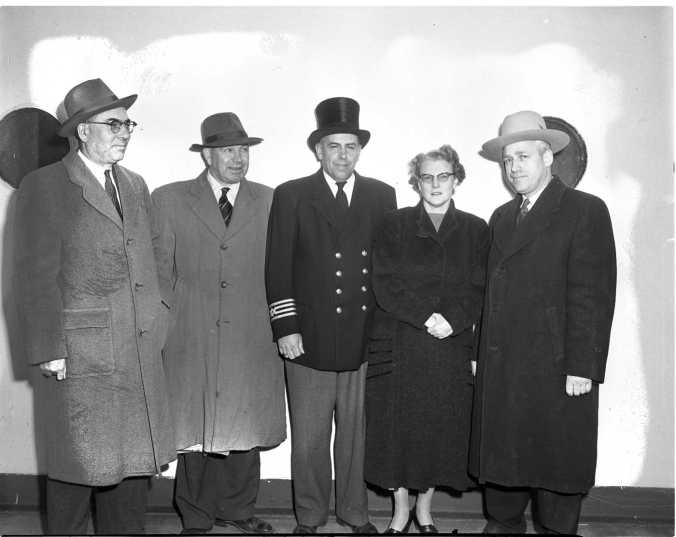 Captain Edwin Jardine is the first Midland skipper to win the top hat in his home port in many years. He gladly surrendered the top hat for a certificate for a modern top piece after docking the Ashcroft at the Tiffin elevator Monday afternoon. R. J. Moffatt, secretary – manager of the Midland Chamber of Commerce, J. G. Hendrickson, CSL manager in Midland, Capt. and Mrs. Jardine and mayor Charles Parker.

Future citizens in training. First Midland (St. Mark’s Anglican Church) Cub Pack with Cub Master Ray Worrell in the back. South Georgian Bay Boy Scouts Association has asked local municipal councils for financial support. (No names are given for this photo) (Our scarves “neckers” were red and blue) 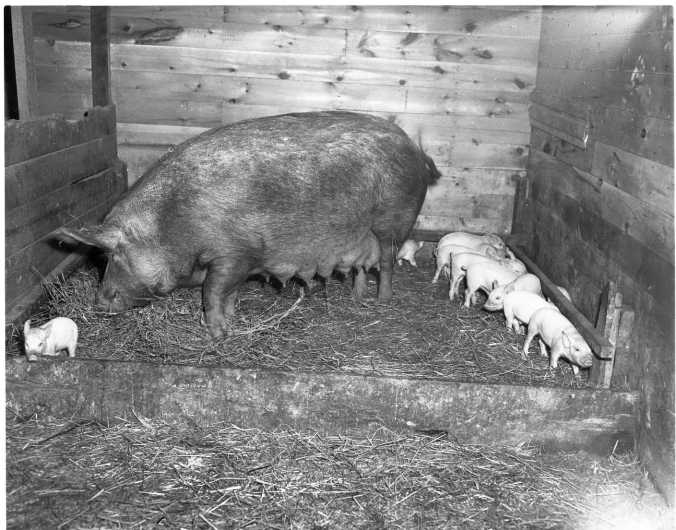 This Red Tamworth sow gave birth to a litter of twenty piglets on the farm of Jack Toole, R.R. 2 Midland, a couple of weeks ago. All but five survived, one with the help of a baby bottle. Farm officials say the national average is eight pigs in a litter and anything over a dozen is unusual. Her last effort was fourteen.

Members of the agricultural science class at MPDHS show off the last of the chicks reared in their incubator. Joanne VanderVoort, Carol VanLuven and Priscilla Quesnelle have observed over 1,000 eggs through the various stages of development.