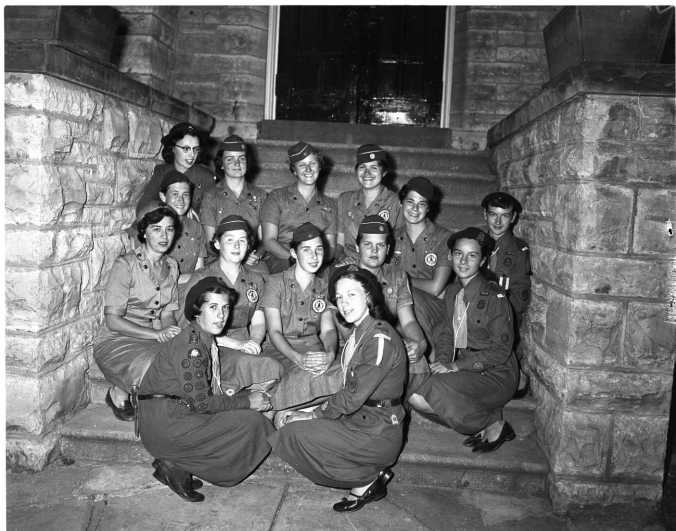 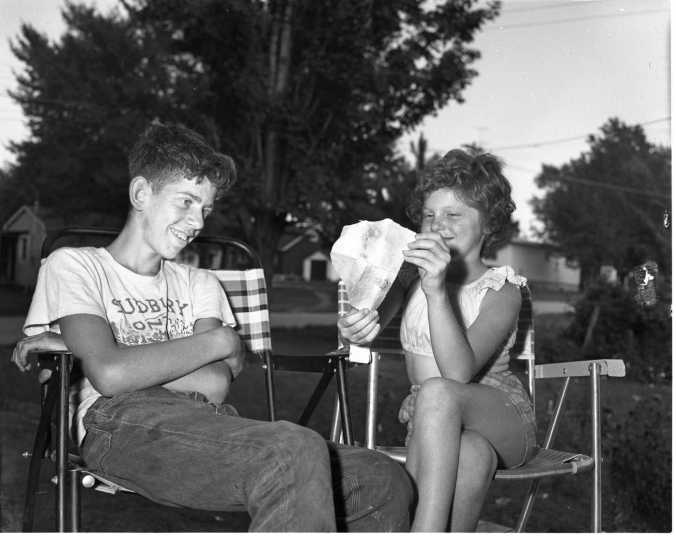 A notable note is being perused by Billy and Karen Atkinson, 196 Eighth Street. It’s the very one their father, Albert Atkinson, placed in a bottle and tossed into Lake Huron 24 years ago. The note read;

It was found by a vacationer in Honey Harbour this summer who mailed it to the Free Press office with this note;

Aug. 7, 1957. Dear Sir: Enclosed find a note that I discovered in a bottle on my beach at my summer home, Honey Harbour, Mermaid Island, last week, just before returning home. It may be of interest to some families in Midland. Rev. John M. Strodel Buffalo, New York. 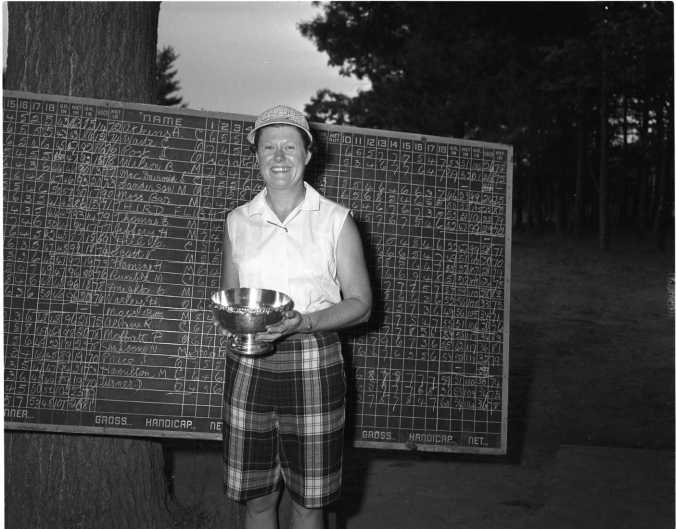 Miss Jean Wallace is the first woman to win the Simcoe County women’s golf title since 1950 and is seen above with her trophy at the Midland Golf & Country Club. Shooting rounds of 82, 84 and 85, Miss Wallace’s total of 251 was two strokes better than her nearest rival, Mrs. Betty Robinson of Collingwood. 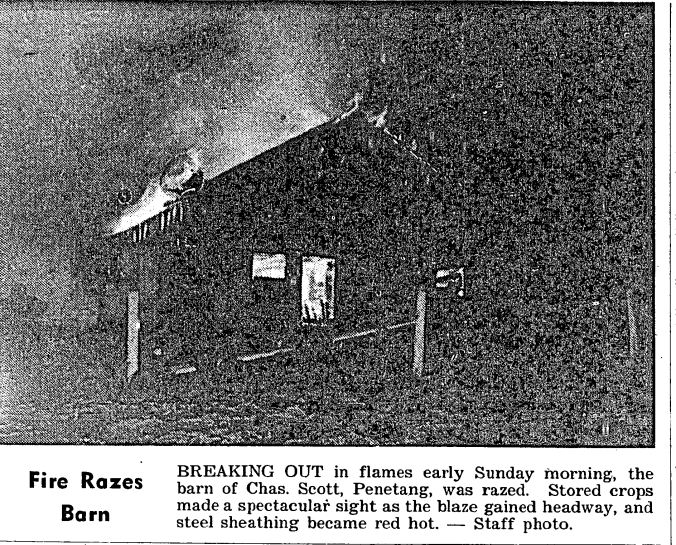 Penetang firemen had a four-hour battle on their hands when they were’called out about 5 a.m. Sunday to extinguish a blaze in Chas. Scott’s barn. The fire was first discovered by Mrs. Peter Marchand, who heard the “crackling sound of flames”.  She called to her son, Leon, who turned in the alarm. The barn contained a large quantity of hay and straw, as well as approximately 2,000 bushels of oats which had just been threshed recently. No estimate of the loss is available at present. The loss is partially covered by insurance. Greatest “worry of firemen was that the flames might spread to nearby wood and sawdust piles, or to the new arena. 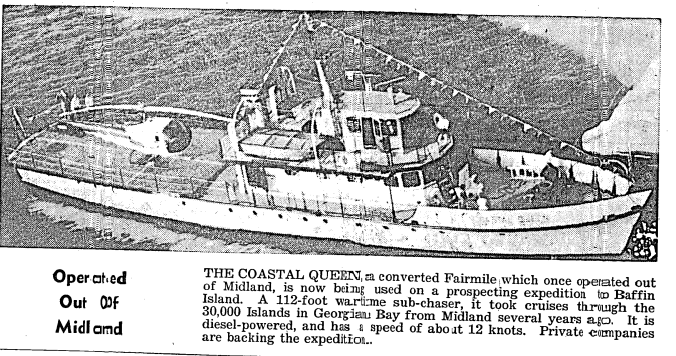 We could find no record of this Fairmile, Q089 built at Creavettes in 1942, as a local cruise ship. Here sister Q088 built in Toronto was the Penetang Eighty-Eight or Midland Penetang Eighty-Eight of local fame. Bob Gilles, son of Midland banker R. G. Gilles was the pilot of the helicopter on this northern expedition. 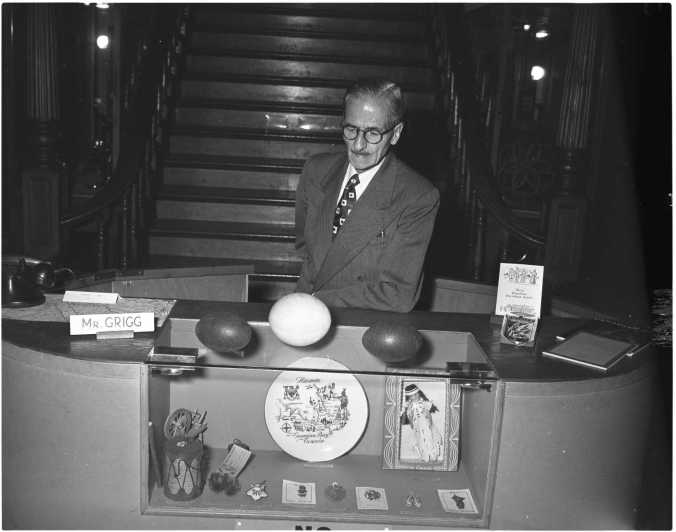 If these eggs were to hatch, assistant curator R. A. Grigg would have had some strange new exhibits for Midland’s Huronia Museum, largely devoted to displays of Indian lore and early pioneer life in North Simcoe. The big object in the centre is a cream-ish coloured ostrich egg, surrounded by two black emu eggs. Donated to the Museum by Miss Riddell, of Toronto and Go-Home Bay, the eggs were part of a collection made by her father, a sea captain. [ This photo was taken at the front desk of the old Huronia House Museum, the James & Charlotte Playfair home, note the  staircase behind.] 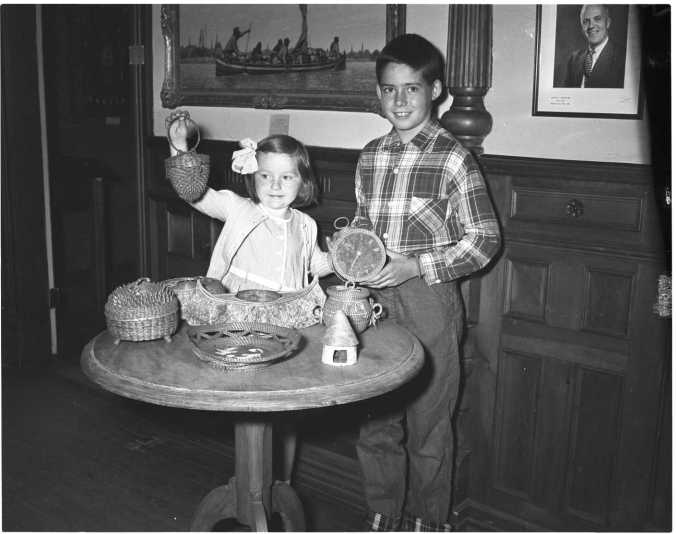 Many examples of early native handicrafts were recently donated to Huronia Museum by Miss Riddell of Toronto and Go-Home-Bay. Many of them were obtained by her late father, a sea captain. Getting a close look are Jane Upper, daughter of Mr. & Mrs. C. Upper, Grimsby and John Cranston of Midland.