” All I want is a room somewhere” from My Fair Lady has long been the theme song of Midland car czar Lionel Bourgeois. Not long after he opened his Modern head office, parts and service department on Hugel Avenue five years ago, he was faced with the problem of finding a spot for a new-car showroom. Showing the new models outside in the winter was inconvenient for both customers and salesmen. Finally, the solution appeared to be in combining a showroom with the service station operated by Bourgeois Motors at Hugel and Midland Avenues. But to have enough depth, the showroom would have to extend onto the property next door. Never one to be stumped by minor difficulties, Mr. Bourgeois purchased the house next door, moved in, shifted the intervening driveway closer to the house and up went a gleaming new showroom. Glassed in on two sides and with fluorescent fixtures, the showroom is more than amply lighted. Four cars can be easily accommodated in the 50 by 30-foot space, complemented by wall panelling in a natural wood finish. Of cement block construction, the showroom has a facing of red brick, with attractive flower beds along two sides. The entire corner has been paved. Other departments, too, benefited from the $25,000 face-lifting. The service station itself now has three car stalls with two lifts, and the annex joining it with the service department can hold four cars. There will be more room in the used car lot on Midland Avenue. Concrete block construction was by Beauchamp Construction Company of Penetang, wiring by Barber and Haskill and plumbing and heating by James Bath and Sons. Staffing the showroom and car lot are Mr. Bourgeois himself, Larry Dumais and salesmen Don Argue, Les Marsell and Newton Train. The official opening, when the service department will also be open for inspection is slated for Friday and Saturday, Sept. 20 and 21. The ‘hoopla’ includes square dancing Friday night to Mel Lavigne’s orchestra, a draw for a used car Saturday, roses for the women, children’s prizes and novelties, and pop for all.

St. Andrew’s Hospital Ladies Auxiliary raised $480.00 in a recent drive for funds at their booth at the fair. Pictured are Mrs. Ed Lawlor, Mrs. Ernie Nicholson and Mrs. Tom McCullough. 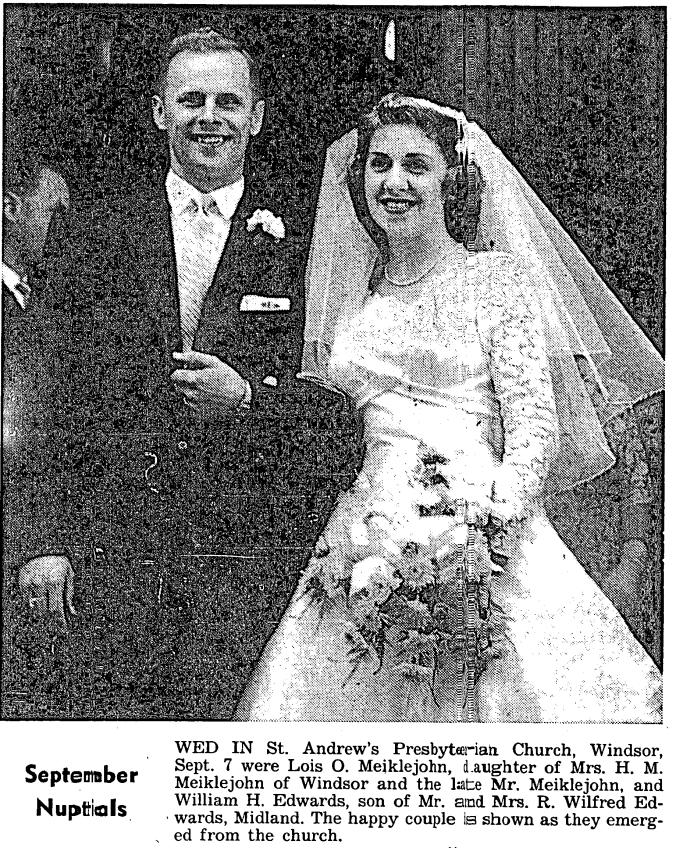 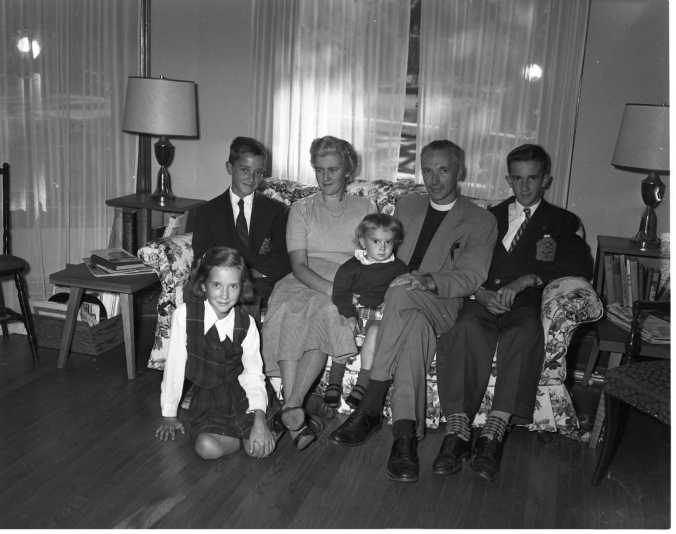 Rev. Lloyd J. Delaney’s family appear happy to be in Midland where father took over as rector of St. Mark’s Anglican Church Sunday. Family members are Anne, 9, Mary, 3, John at left, 11, Mrs. Delaney, the former Helen Carr of Toronto and Paul 13.  [Reflect on the positive influence this family has had, not only in Midland but many parts of the world. Their contributions to social equality,  education, youth, religion, music and the arts is truly amazing. Midland would do well to honour them in some permanent way.]

Another step in the building of the Waubaushene to Sudbury leg of the new Trans Canada Highway is nearing completion at Waubaushene. Seen are the concrete pillars which will carry the new road over the CNR tracks. Thousands of yards of fill have been used to raise the approaches to the bridge.

Alcime Dorion of 57 Elizabeth Street holds a 38 inch Northern Pike taken on a Mepps spinner off the shipyard pier. While this one weighed 12.5 pounds, Alcime caught a 23.5-pound pike at the same location in 1945.