It must be wonderful to be young and full of the pep and vitality displayed by these Elmvale District High School cheerleaders at the recent Elmvale Fair. Girls of the school defeated the boys in a marching competition. Judges said they kept their mind on their work better than the boys. 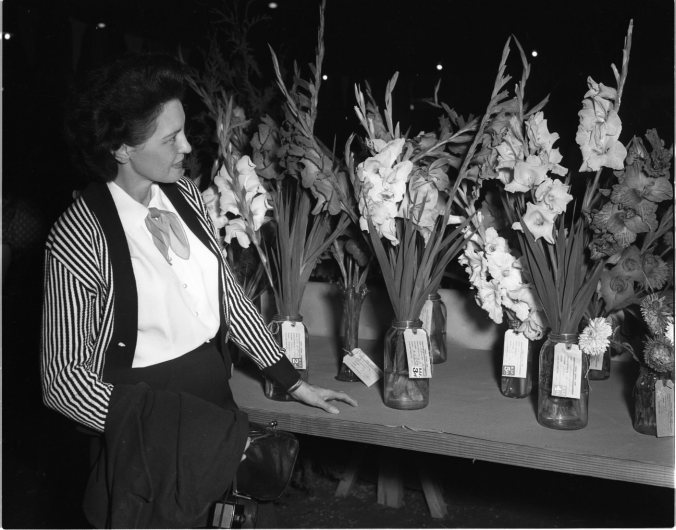 There’s always plenty to interest the ladies in the flower section of the many fall fairs now in this area. Mrs. Frank Robertson was interested in the gladioli display at Elmvale’s 99th annual fair this year.

Coaching boys athletics at MPDHS is the (sometimes) happy task of the men above, seen lining up the week’s program. With track and field out of the way, for the time being, football and basketball now come into full swing. Left to right are Emile Blouin, assistant track coach; Douglas Swales, head coach in charge of senior football; W. C. Setterington, athletic director; Bill Kennedy, in charge of the junior football team and Perry Rintoul, head track coach. 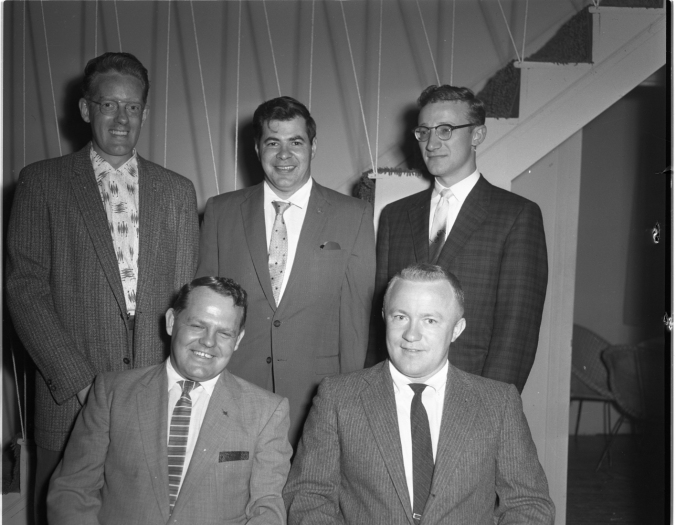 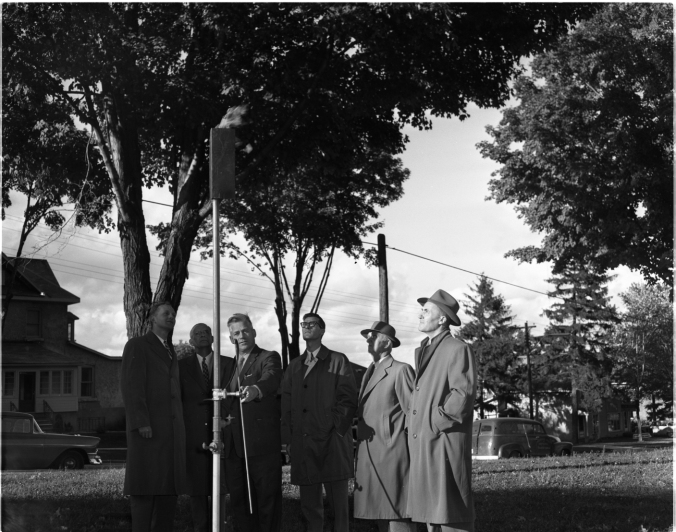 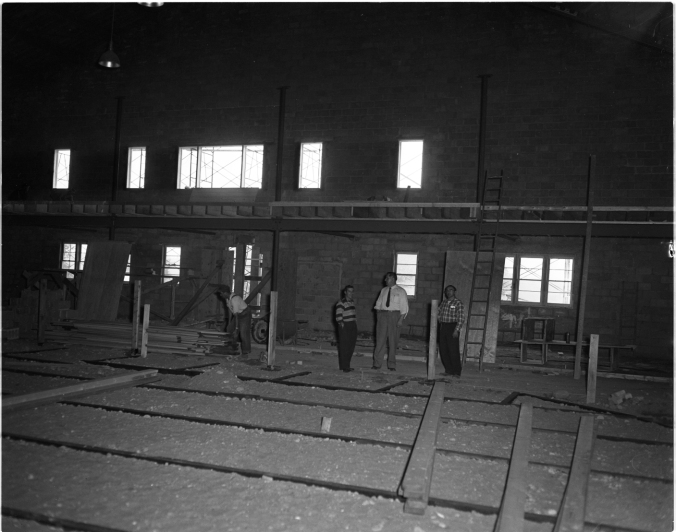 Inside the new Penetang Arena work on the actual building and installation of the artificial ice making machinery is moving forward. The front of the structure has been improved in appearance by a coat of white stucco over the entire front. Windows cut in the front wall on the mezzanine floor level alleviate the blank look of the large expanse. In the interior, one finds sleepers already in place awaiting the arrival of the miles of pipe which will be laid to provide ice. Gravel has been added to the top level of the sleepers and, when piping has been installed, it will be covered with a layer of gravel, and sand. Future plans call for installation of a concrete floor over the whole surface. 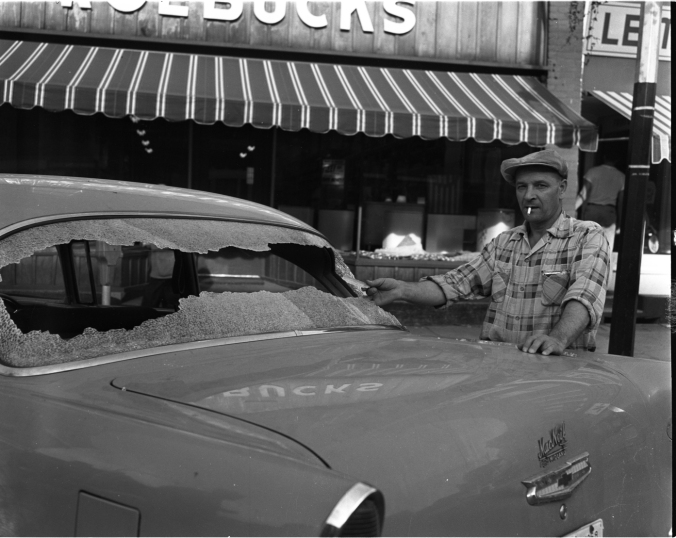 Hey, what goes on here, asked Midland’s Dan Dubbin, as he surveyed crystallized rear window of his car. The window was perfectly normal when Mr. Dubbin went in to work at 1 p.m. It looked like this when he came out. Damage was believed to be caused by a flaw in the glass. 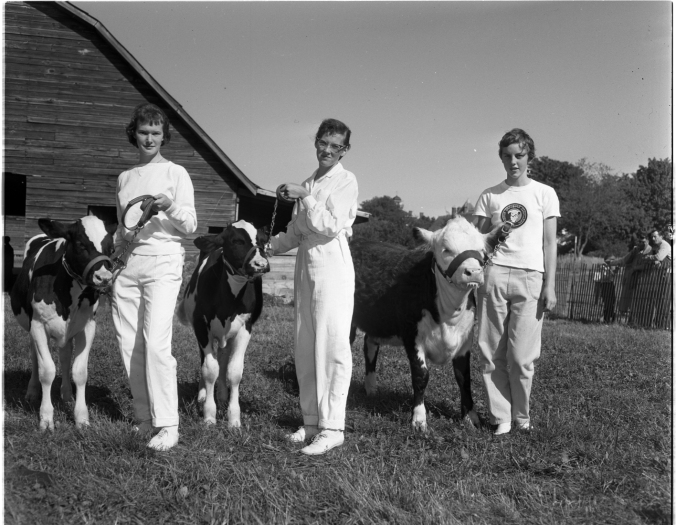 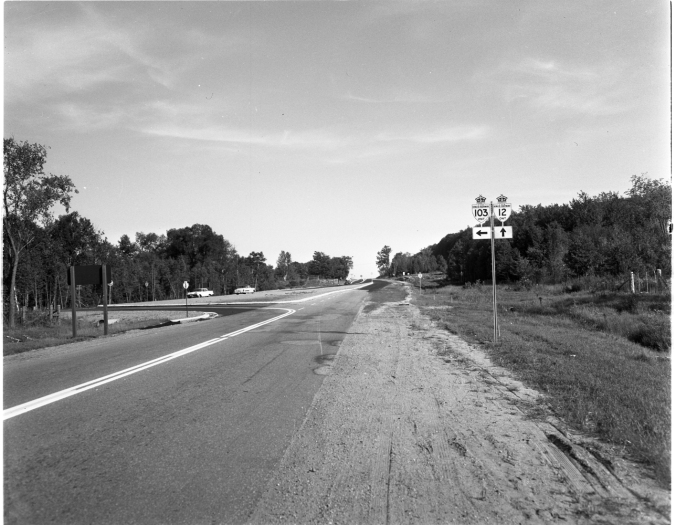 Long tie-ups for traffic westbound on Highway 12 could result at the junction of the new Trans-Canada Highway at Waubaushene on weekends next summer. At present, the westbound traffic must await an opening to cut across the southbound lane of the Trans-Canada. That could be a long wait in summer traffic. It might also mean some bad accidents unless motorists take special care. 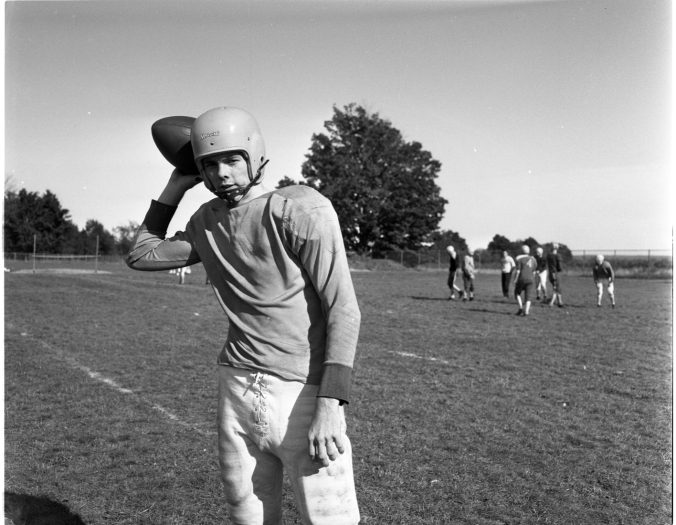 It’s football time again and Midland – Penetang District High School is hoping for a repeat of the fine season enjoyed by both senior and junior teams last year. Two senior stalwarts above are Bill Offord, lower photo, who will do the passing, and Paul McDonald, who will handle the kicking chores this season for Coach Doug Swales’ Club. The team opens the 1958 season in Barrie this afternoon.

They start them young at the Elmvale Fair, judging by the size of these children taking part in the calf club competitions for public schools. Left to right are John Archer, 10, Betty Strath, 8, and Greta Ruth DeGorter, 10. Greta won first prize in this division.

Keeping right up to date, Waverley Public School featured a space rocket for its float in the school parade at Elmvale Fair Tuesday. “Spacemen” are Dennis Brown, left, and Deanne Leonard.

Another one from the old files. No wonder there were so many disastrous maritime tragedies. This was before the lessons of Titanic.

Georgian Bay passenger steamers were in their heyday at the turn of the century, and the steel propellor Majestic, flagship of the Great Northern Transit Co. (the “White Line”) was among the most select. She was built in 1895 by the Collingwood Dry Dock Company with a length of 209 feet, a width of 35 and a depth of 12.6 feet, gross tons 1,578, two masts and one stack. Her interior decorations were in elegant “Victoria and Albert” style. Her hull was originally painted white (hence the name “White Line”) cabins white, stack white with black top. In 1899 the Great Northern Transit Co. and the rival North Shore Navigation Co. (“Black Line”) and the Beatty Line of Sarnia were merged to form the Northern Navigation Co. As a member of the new fleet, the Majestic had her hull painted black as far as the main deck rail. Her cabins remained white. Her stack was painted red, with a black top over narrow white bands. As a member of the Northern Navigation fleet, she operated first on the Sarnia, Lakehead, and Duluth run. When newer ships entered the fleet she sailed in the Georgian Bay-Mackinac service. This fine old timer was destroyed by fire while in winter quarter at Point Edward Dec. 15, 1915. Her burning hulk drifted against the Saronic (ex-United Empire) and set her afire top. The latter was rebuilt as a barge, but the Majestic was a total loss. The Majestic arrived at Midland Dominion Day, either 1902 or 1903, with 2,200 passengers, the most dangerous load ever carried by a steamer on Georgian Bay. The occasion was a union Sunday School excursion from Collingwood. Skies were sunny and it proved to be a never-forgotten day for the children and their parents and teachers. At that time the Majestic still retained-her all-white paint scheme except for the black main wale streak.  (: any of a number of strakes usually of extra thick and strong planks in the sides of a wooden ship —usually used in plural)