Surrounded by 110 friends from Orillia, Midland and district, Reeve W. H. & Mrs. Keller celebrated their 45th wedding anniversary at a special dinner at the Parkside Pavilion Wednesday night. They are shown here as they cut the cake. County councillors, county officials, long-time Midland friends, and associates paid tribute to the Reeve and his wife. 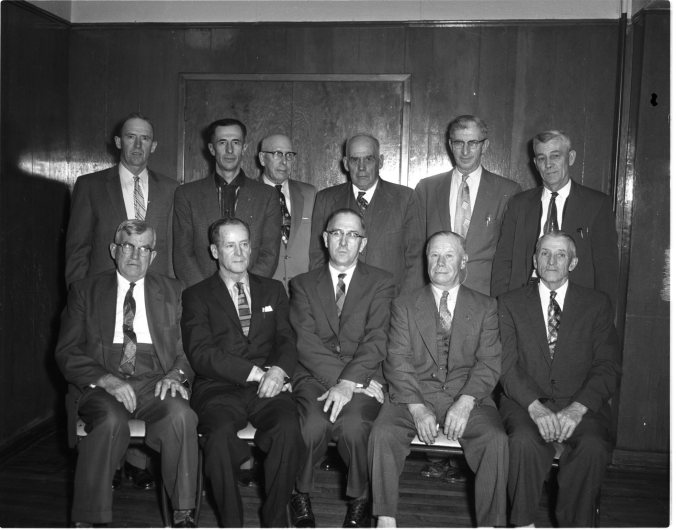 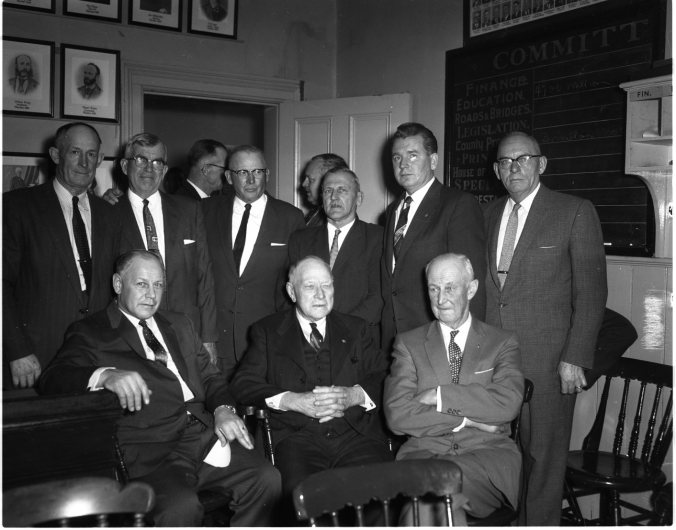 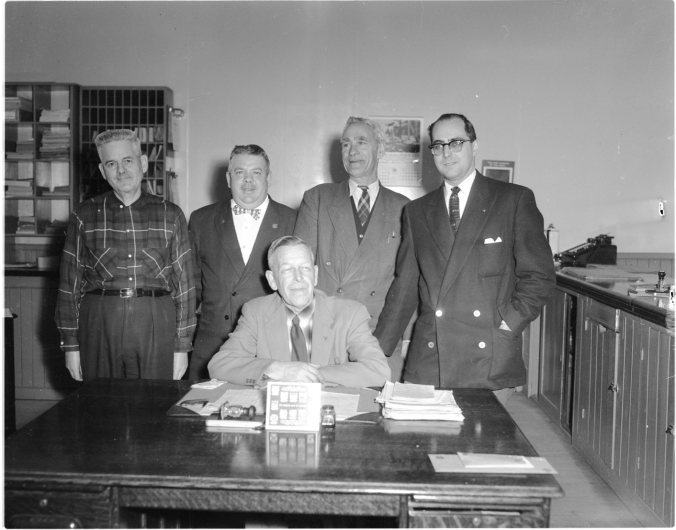 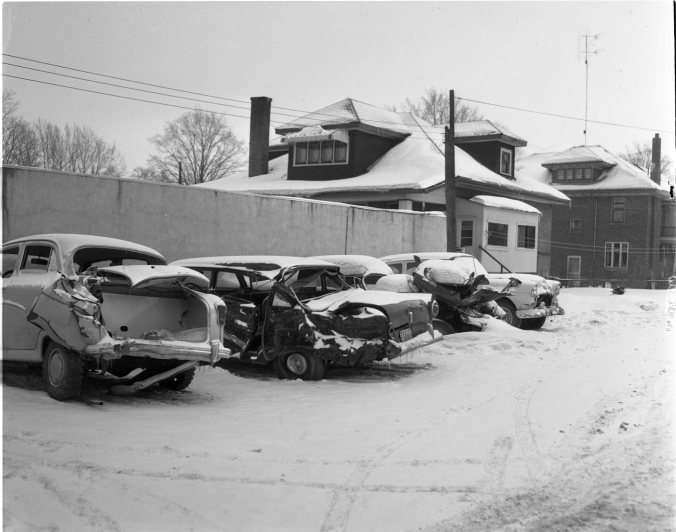 Hazards of winter driving are plainly (and painfully) evident in this picture. Parked behind Boyd’s Garage in Midland (SW corner of Yonge and King), all the vehicles were victims of hazardous road conditions last week.  Repair bills will run into many hundreds of dollars. Similar scenes can be found in and around many other garages throughout North Simcoe as a result of one of the severest winters in many years.

Two Vasey girls, Lorna Brown, left, and Pauline Robinson admire one of the many blouses on display as North Simcoe 4-H Homemaking Clubs held their achievement day at Elmvale Saturday. The theme of this term’s project was “What Shall I Wear” a familiar question for the ladies, young or old.

Judging other people’s work as well as their own is part of the experience given members of North Simcoe 4-H Homemaking Clubs. Busy judging at the achievement day in Elmvale Saturday were, left to right, June Langman, Allenwood, Pat Luck, Edenvale, Margaret Healey, Vasey and Brenda Moreside, Wyevale.

Dr. A. D. MacKenzie points out to Penetang Hospital Board Chairman Jerome Gignac that the accreditation certificate for Penetang General Hospital is actually dated May 7, 1958. Penetang is the first hospital in the district to receive accreditation. Looking on at left are Dr. Henri Marchildon and Dr. D. J. Patchell; at right, Dr. W. E. Binkley and Dr. R. Lauzon. 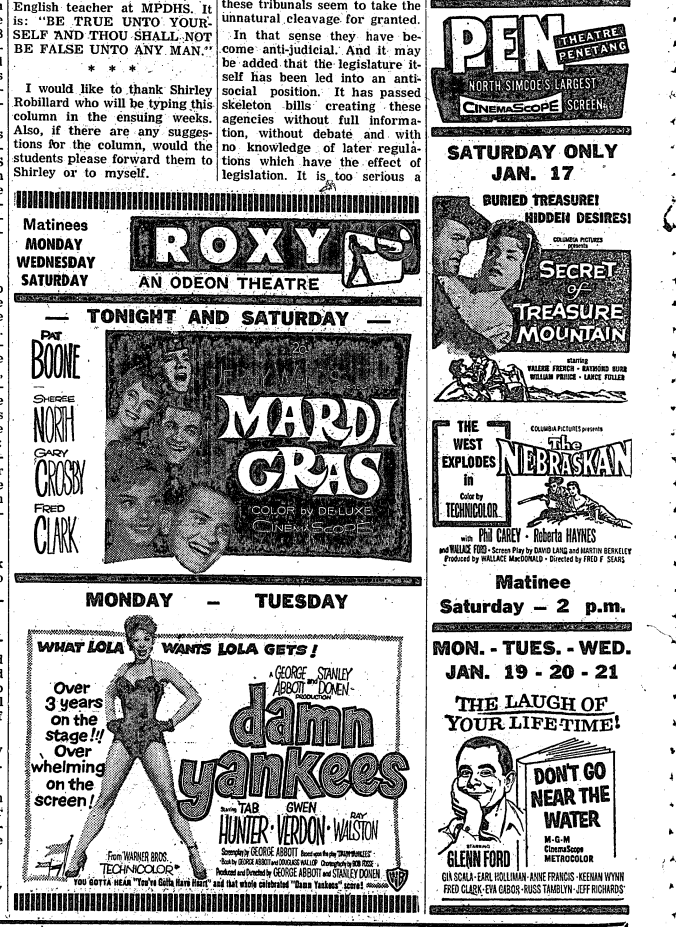 The photo below is from the April 20th, 1955 Free Press, front page. It was not used in the blog from that date but there is something compelling about it. A young man’s dreams. 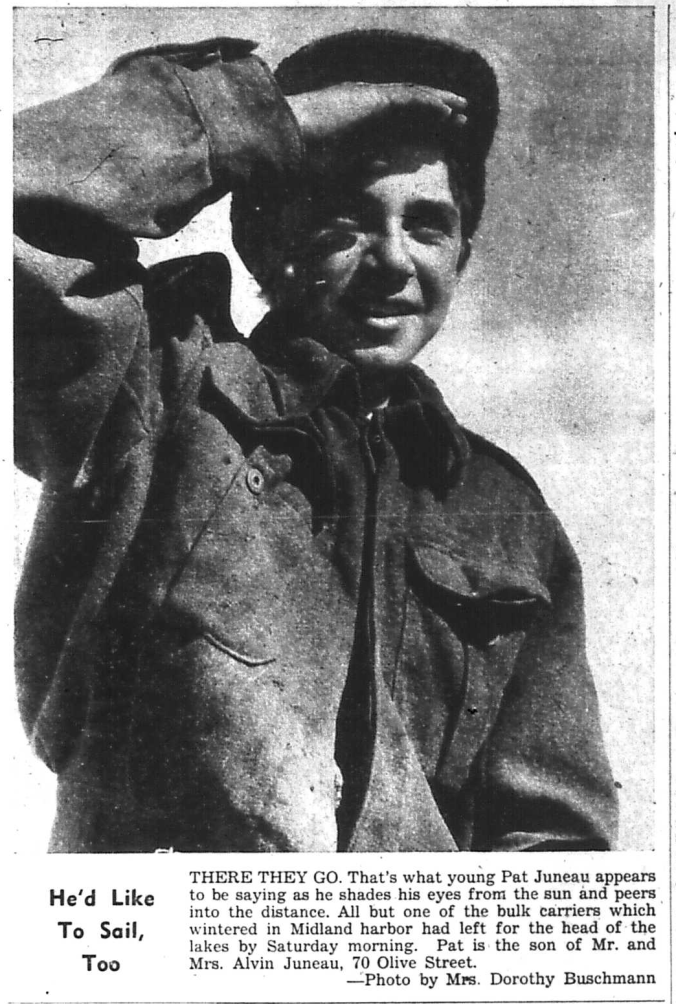 A look back to the January 25th, 1923 edition of The Midland Argus under the heading of “Local News”, 96 years ago.

A contract has been already let for the new elevator to be placed in St. Andrews Hospital, to a Galt firm, and it is expected it will be installed within the next couple of months. * * * The changeable weather of the past few days has been responsible for an unusual amount of illness, and severe colds, bronchitis, and other ailments are quite prevalent. * *  *  The ice breaker owned by Burke Bros. was moving about in the harbor on Monday morning smashing up the ice and placing some of the grain boats at the elevator. * * * A large number of hardwood logs have been brought to town during the past few days. The recent fall of snow has provided excellent sleighing throughout this district and heavy loads are being transported with comparative ease. * * * The first game of curling between Penetang and Midland teams for the Grant cup will take place tonight, four rinks playing here and four at Penetang. The games were called for last week but a mild spell spoiled the ice. * * * The cement block on King Street where the fire took place last week has been purchased by N. K. Wagg and others. Just what will become of it is not yet known, but it is quite unlikely any move towards re-construction will be made until spring. * * * The mill firm for so many years carried on under the name of Chew Bros. has been changed and a new company organized to be known as Letherby & Chew with a capital of $700,000. They will carry on a general sawmilling business as heretofore. (The mill was located in the area of the current Pettersen Park.) * * * Mr. and Mrs. F. O. Preston left last week for California and Mr. and Mrs. James Playfair and Mrs. Featherstonehaugh for South America. Mr. and Mrs. D. S. Pratt and daughter Edna will leave in a week or two for Havana and other parts of Cuba. * * * Three students from Knox College, who are going out to the foreign mission fields will conduct the services at Knox church on Sunday next both morning and evening. It should be interesting to hear the message these young men will have to give. * * * The remains of Miss J. M. McMullen who died at Victoria BC  on Sunday, January 14th arrived here on Monday and were taken to the home of her brother, Mr. J. G. McMullen, First Street from which place the funeral took place on Tuesday afternoon to the Church of England cemetery at Wyebridge. * * * The C.P.R. Company is contemplating the erection of a permanent bridge to take the place of the trestle work across the head of the bay leading to Port McNicoll. The engineers have been busy taking sounding for some time. Last year part of the present temporary structure settled and extensive repairs had to be made. * * * The latter half of January is now disappearing day by day and the days are lengthening perceptibly. On a bright afternoon, the lights are no longer necessary until about five o’clock. People who dread the winter have little to fear now. Lent is less than a month away, Ash Wednesday falling on the 14th of February. * * *  Manager Bugg of the Model Theatre has just entered into a contract with the famous Fox Film Co., for a series of very high-class productions that will be featured during the next few weeks. The list commenced this week on Monday with the presentation of that fine picture – “Over the Hill.” The contract runs into several thousand dollars and is the first secured from the Fox Company. * * * A new line of rowboats is being built at the Gidley Boat House, operated by the Honey Harbor Navigation Co. They are of the smooth planking designs and are said to be much superior, both in strength and durability to the lapped plank style. A large number are being built in anticipation of a demand for rowboats from among island cottagers next summer. They are also constructing a number of small and large lifeboats.

This is a description of the fire mentioned in the article above. Hoping our history sleuths may be able to identify the location.  Shortly after one o’clock on Monday, a fire broke out in the cement block directly south of the Argus office and entirely gutted the building, consuming the stocks of three firms occupying the premises. Garber & Son, boots and shoes, J. Simpkin, clothing and gent’s furnishings and B. Freiligh, gent’s furnishings and boots and shoes. The building was owned by Staiman & Cohen. The fire apparently started in the back section of one of the stores and before it was noticed had gained considerable headway. The building was of such a nature as to allow of the swift spread of the flames, which swept away the light partitions and took a firm hold upon the consents in a very few minutes, A false roof saved the flames from breaking out for a time but it served to hold the fire with the result that the smoke became so dense as it rolled out of the building as to stifle the firemen and those who sought to check the progress of the fire. Several lines of hose were at work, one line giving attention to the Argus building which stood in great danger for a time when the smoke became so thick that the firemen were driven off. They got back to the task, however, in time to save the building. There was $6500 insurance upon the building destroyed, B. Freiligh had $14,000 on stock and J. Simpkin $5000, while Garber & Son had no insurance.