Grouchy-looking old Indian medicine man seemingly holds no terrors for pretty Western University co-ed Dawn Phibbs of St. Thomas, as she gets him ready for another big season at Midland’s Huron Indian village. Supposed to be holding the ladder is Dr. Wilfrid Jury, supervisor of the village and noted archaeologist.

Getting ready for another busy season, John Bridges nails sign to palisade of Midland ‘Y’s Men’s Huron Indian village at Little Lake Park. Holding the sign for Johnny are Norman Clarke of Barrie, left, long identified with historic sites in Huronia country and workman Wallace Kells. The village, now starting its fourth year, will host more than 5,000 school children in the next few weeks.

Each year the compound behind the palisades of Midland’s Huron Indian village at Little Lake Park gets more and more crowded as new and authentic pieces of every-day Indian life more than 300 years ago are added. This picture was taken from new look-out erected this year at the south end of the village. It makes an excellent camera vantage point.

Long-time residents of North Simcoe, Mr. and Mrs. Henry Reynolds marked their golden wedding anniversary May 19. They are seen above with their anniversary cake during a gathering held in Wyebridge Community Hall.

There were, times when things were pretty tough, financially, but Henry Reynolds would be quite willing to do it all over again. Commented Mr. Reynolds as he was interviewed by a representative of the County Herald in Wyebridge Community Hall last Tuesday afternoon. The occasion was the celebration of his and Mrs. Reynolds’ 50th wedding anniversary.  Mr.  Reynolds and the former Maude Carpenter were married in Barrie May 19, 1909. Both were natives of Tiny Township.
They operated farms in the area all their lives until they retired to spend their remaining days in Wyebridge four years ago.  The Reynolds’ first farm after their marriage was near Wyebridge, but they moved several times in subsequent years to a farm near Waverley and another elsewhere in Tiny. Then they settled down to live on a farm at Lot 86, Con. 1, Tiny, for something like 40 years before they retired.
Mr. and Mrs. Reynolds had seven children, four sons, and three daughters. All are living and all are married, providing their parents with 23 grandchildren and one great-grandchild. Sons are Armour, Albert and Willis, all of the Wyebridge area, and Edwin, who lives at Barrie. The daughters are Mrs. George Marchant (Gladys), R.R. 1, Midland; Mrs. Ed Collins (Leta), Midland and Mrs. Meredith Guthrie (Hazel), Wyebridge. Warden of the Church of the Good Shepherd (Anglican) at Wyebridge for 15 years, Mr. Reynolds also served on the board of S.S. 21, Tiny (MacDonald’s School) for six years. He’s a staunch Conservative in politics. Both Mr. and Mrs. Reynolds enjoy reasonably good health and entertained a large group of friends Tuesday afternoon and evening. 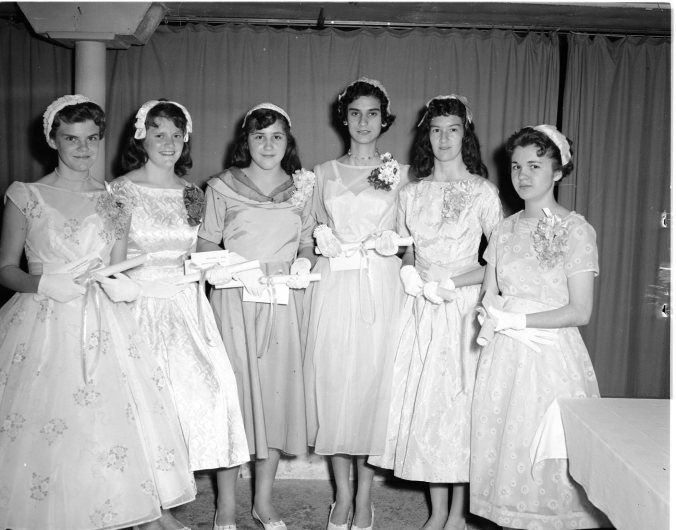 Thursday night was a happy occasion for these pupils of St. Mary’s Separate School, Victoria Harbour, as they received their Grade 10 graduation diplomas. Left to right are; Bryde Bernard, Margaret Cadeau, Audrey Somers, Mary Deschenes, Carol Roy and Celima Pelletier. Mary will attend MPDHS next year, Celima hopes to register for a business course, and Carol will work for the Bell Telephone Company in Midland. The other three girls will attend St. Theresa’s High School in Midland.

Chairman of St. Mary’s Separate School Board, in Victoria Harbour, Mrs. Theo Bernard can be proud of the scholastic prowess of her own daughters, as well as other students in the school. Bryde, left, had the highest standing in general proficiency, grades 9 and 10. Minta, right, was tops in religious studies among grades 7 and 8 pupils. 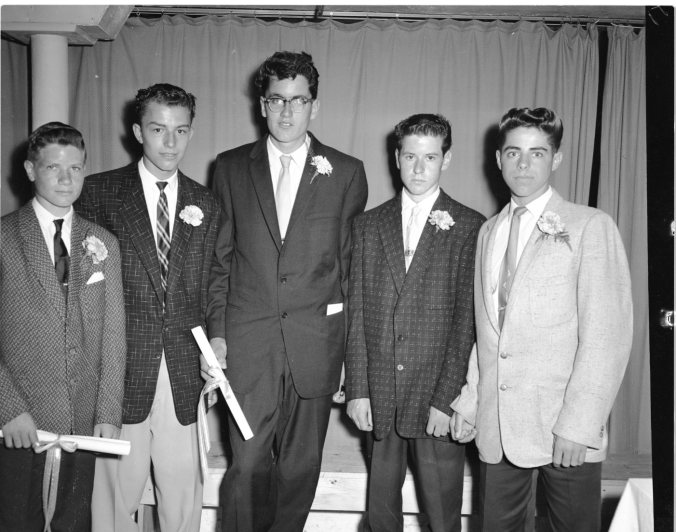 Old MacDonald’s farm was the theme for the junior choirs of St. Paul’s Presbyterian and St. John’s United Church as their portion of a musical evening held at Victoria Harbour Public School Friday night. Getting “in the mood” are, left to right, Barry C. Schissler, Lorne Profit, Danny Johnston, Jim Pearsall and Dennis Rutherford.

PC Candidate Lloyd Letherby, left, and Liberal candidate Jack Andre, right, met for the first time on Friday afternoon, May 22, in the office of J. R. Chittick (centre), general manager of the Free Press Herald, where they shook hands as a preliminary to campaigning for Simcoe East membership in the Ontario Legislature.

Almost as old as man going to sea is the art of signalling messages between ships with flags. Demonstrating their ability at the annual inspection of RCSCC “Huron” Wednesday night are L/C Terry Mcllravey, left and L/C John Doran.

News items from The Midland Free Press on the last week of May 1939, 80 years ago.

Last week we posted an article on the creation of a 4,000-acre resort community that included Giant’s Tomb Island. This much older notice in the local paper indicates that it was not the first scheme that involved the island.

Another interesting item from March of 1914.

And finally, kitchen stoves are no longer manufactured in Canada, possibly not even in the U.S.A, but in 1937 you could buy this “Beautiful Creation” built in Penetanguishene.