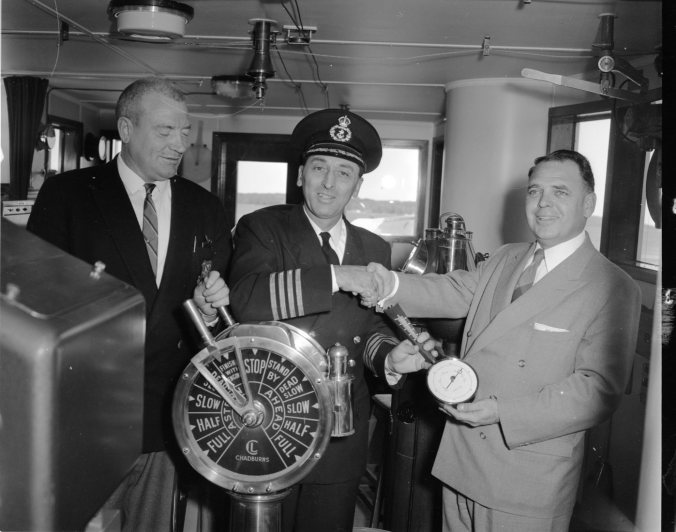 F. K. McKean, left, district agent, Department of Transport, looks on as Neville Keefe, general manager of the Georgian Bay Development Association, right, presents a barometer to Capt. Basil Dube of the Alexander Henry, new ice-breaker and buoy tender. The barometer will hang in the officers’ lounge.  (There was a battle going on at the time to ensure that the “Henry” spent the winter in Georgian Bay not Thunder Bay as had been rumoured. Perhaps the barometer was part of the wooing.)

Our “Red Lady of the Lakes” in Midland, late January of 1960. Note the Christmas tree on top and the fully-loaded CSL freighter at the Town House.

This was the condition of the home of Constant Desroches, Lafontaine, when Penetang Fire Brigade arrived Friday, Oct, 16. Along with Thunder Bay brigade, they concentrated on saving adjoining buildings. Farmers and spectators came from miles around and could only stand by watching as flames consumed the home. A large portion of the furnishings were removed from the house before the heat became too intense. Only a few feet separated Lafontaine Telephone exchange building from the burning home, Penetang and Thunder Bay firemen played hoses on homes on the far side of the burning building to keep the fire from spreading. 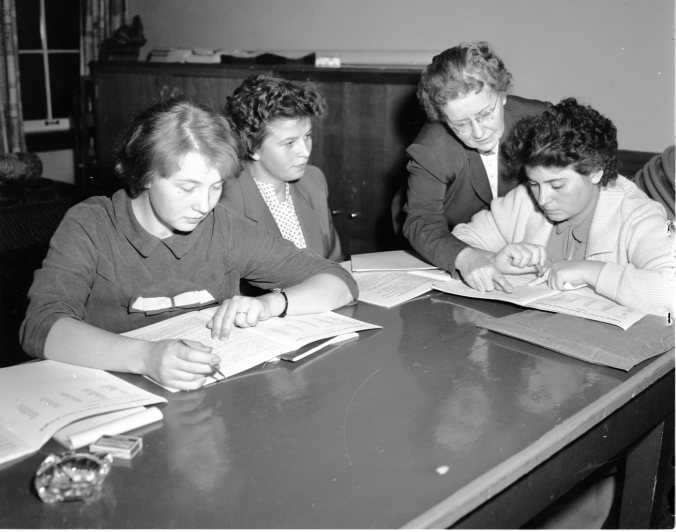 English classes for new Canadians, sponsored by Midland-Penetang District High School Board with the assistance of the Department of Education, are held weekly in Midland YMCA. Here Mrs. J. W. Smith, one of two instructors, explains a point to three students, Mrs. Karl Lehr, Mrs. H. Hildebrand and Mrs. Werner Moos, who attend the lectures. Canadian newcomers and their children also make use of other facilities at the ‘Y’, which this week is conducting its annual fundraising campaign.

Little league hockey got underway again in Midland Saturday morning, with nearly 400 boys signed up. Start of a junior “B” game, finds, left to right, Willard Cadeau, Tigers, referees Mike Duval and Mike Robitaille, and Beehives’ Steve Burton all set for the first face-off of the season.

Nearly 200 veterans of World War I, all members of the 157th and 177th Battalions of the Grey and Simcoe Foresters, checked into Midland Armory Saturday night for their first reunion in 40 years. Handing out identification tags were Bill Bradley of Barrie (with hat) and George Parr of Midland. Two men at the right are Charlie Scott and Joe Martin of Penetang. 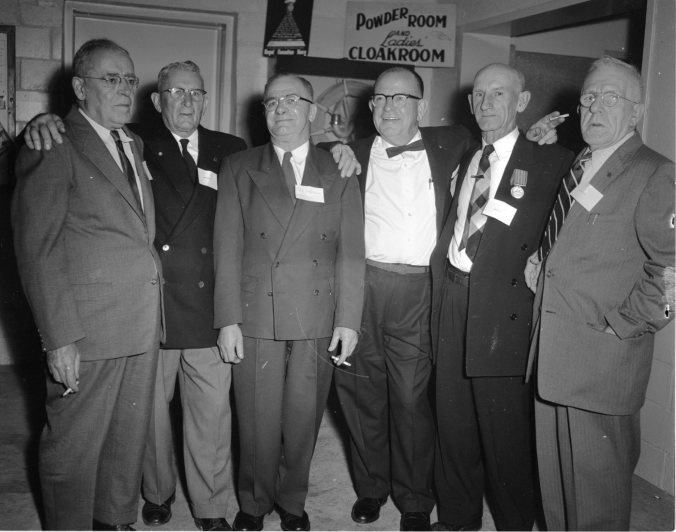 When the call went out for men to join the 157th and 177th Battalions of the Grey and Simcoe Foresters back in 1915, Penetang was quick to fill its quota. Among the men who “signed up” then and who were present for the reunion at Midland Armory Saturday night were, left to right, Bob Beaulieu, Henry Hamelin, Ed Patenaude, Wilfred K. Smith, Jim Dubeau and “Hec” Adams.

Not vote gathering, but meeting old army buddies of 40 years ago, Hon. Leslie Frost is seen with Wesley Bolton, Tottenham, Jack Baker, Alliston, and another unidentified man as he attended the 157th and 177th Battalion reunion in Midland Saturday. Premier Frost was all for having the event made an annual affair. 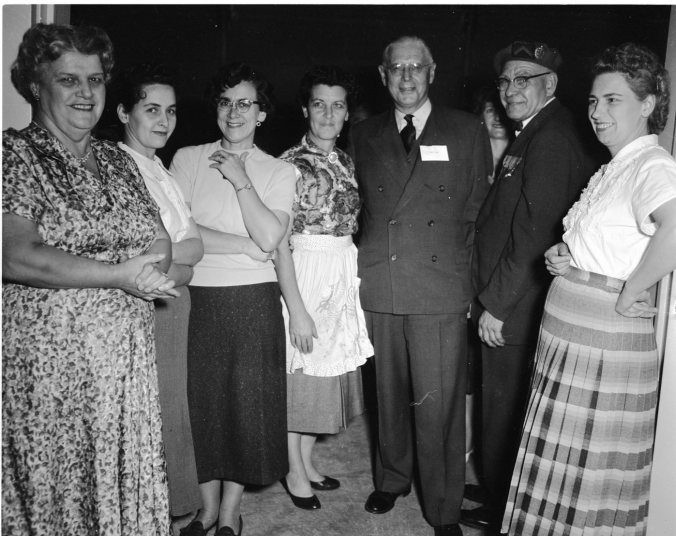 “We should pledge ourselves to meet every year until our gallant army melts away into the mists of time,” Mr. Frost told the vets who assembled to eat turkey and relive old times. Members of the Ladies Auxiliary of Branch 80, Canadian Legion, who catered for the event, said there were only three empty chairs at the big tables which filled the south end of the drill hall. Premier Leslie Frost, a veteran himself, one of the 200 veterans of World War I that got together Saturday night, thanks the cooks for the meal.

Some of the many Midland veterans who gathered for the reunion dinner of the 157th and 177th Battalions of World War I at the armoury Saturday night are seen above with Mayor Charles Stevenson. Left to right are, front row, Tom White, Mr. Stevenson, Doug Wilson, Harold Sallows (Coldwater), Norman Leclair, Charlie English; back row — Jim Lediard, Art Balwill, John Noquet, Charlie Paradis and George Shakell.

Not many calves get the attention this pure-bred Jersey does from the pupils in “ag. science” at MPDHS. Property of Bob Rawson of the Vasey 4-H Calf Club, this one (and a mate inside the barn) are used to give the pupils an idea of the body structure of a cattle beast, its feeding and management, and for pointers in judging classes. Seen with Warren H. Jacklin, head of the agricultural science department, the pupils are, left to right, Louise Bellehumeur, Bonnie Cheetham, Wayne Hutchinson, Jim Ironside, Paul Scott, Bill Snider and Dave Magloughlin.

“There’s nobody here but us chickens”, says Louise Bellehumeur, a pretty slick chick herself, as she holds one of the sixty birds in the pens at MPDHS. All laying hens of the “Fisher 303” variety, they are used to teach controlled feeding and provide individual tests for egg-laying as well as other special tests by pupils of the agricultural science class at MPDHS.

If present plans materialize, shoppers using Midland’s King Street may soon be protected from the elements by a canopy over the sidewalk, like the one in the artist’s drawing above. It is part of a big program of changes under consideration by the Chamber of Commerce and town officials, including new, narrower sidewalks and subsequent wider parking spaces for vehicles.

Midland Guides and Brownies receive tips from Midland florist Ed Fox as they prepare to plant 1,000 golden tulip bulbs near the cenotaph in Town Park. The bulbs are part of a Guide and Brownie project to mark the 50th anniversary of their movement.

This was a comparatively dull moment around the skate tables as Midland Home and School Association held its annual skate and clothing exchange last Friday afternoon. Earlier in the afternoon, the scene looked more like the bargain basement at Macey’s as Midland mothers tried to find a pair of hockey skates that would fit ‘Johnny’, or a good pair of figure skates for ‘Mary’. About 100 articles were sold.

In a few weeks, the new addition to the Midland plant of Bausch and Lomb Optical Co. Ltd. will be ready for operation, according to Larry Curran, manager. This is an overall view of the old and new plants. 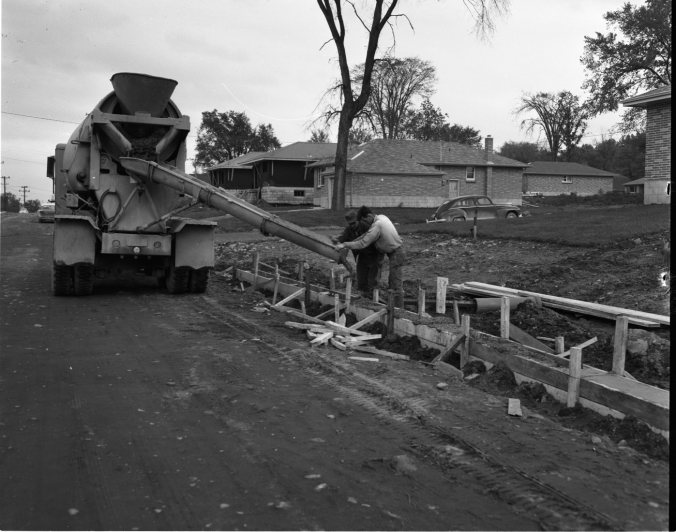 Every day sees more progress on Midland’s new Scott Street in the Wireless Hill subdivision. Workmen guide the spout of a ready-mix concrete truck as they pour new curbing on the south side of the street. One new and two unfinished homes are visible in the background.

The new B. Greening Wire Co. plant is rapidly nearing completion. This photo gives an idea of the massive size of the new industry, located on industrial property in Midland’s southeastern outskirts, just off Highway 12.

Now in semi-retirement C.G.S. St. Heliers and crew have spent several days this week removing the floating docks in Midland harbour. Here one of the dock sections, towed to the ship by the two men in the barge, is hoisted out of the water. It was swung over to the main dock at the right and piled on top of others. Two sections seen at lower left are to remain in the water all winter.