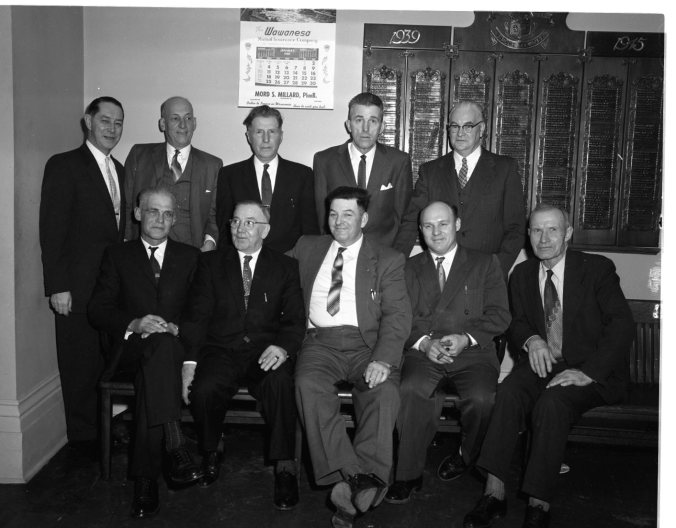 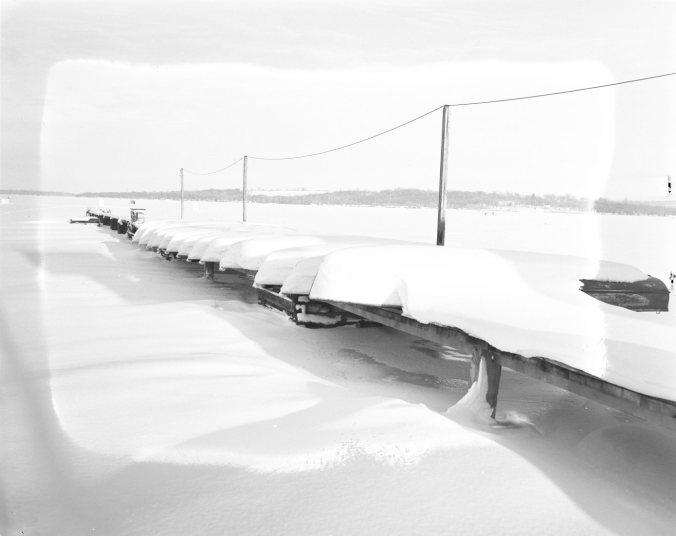 Snow and sleet have transformed these boats, put up on a dock near Victoria Harbour for the winter, into strange new shapes. Ice fishing huts can be seen dotting Sturgeon Bay, in the background.

Winners of one of the major prizes at Midland Rotary Club’s second annual bonspiel was this rink from the Y’s Men’s Club, skipped by Doug Haig. Left to right are; Bill Russell, Mr. Haig, Bert Banting and Clive Park. Incidentally, they DIDN’T win the cup at the right, the photographer learned later.

Officials of Branch 80, Canadian Legion, Midland, for 1960, were inducted into office at a meeting in the Legion Hall January 13. Left to right are, front row, H. A. Wiles, secretary; Saul DeVries, 2nd vice-president; Borden Parker, president; George McLaughlin, 1st vice-president; Rev. J. L. Self, padre. Back row are James Mackie, Len Wiles, Oliver Lesperance, Ken G. Williams, Gene Lalonde and James Duncan. Mr. Wiles is the sergeant-at-arms and the others are members of the executive.

One of the 12 new members of Simcoe County council this year is Deputy-reeve Clinton Smith of Midland. Trying out his new seat for the first time, Mr. Smith gets support from, left to right, Mrs. Smith, Mrs. Beauchamp and Reeve H. J. Beauchamp of Midland.

Just a hint of what less fortunate parts of the province got from the weatherman on two occasions recently can be seen in this picture. Icy wires and trees are not nearly so heavily coated as their counterparts in the Orangeville area and Metro Toronto, following recent sleet storm. The picture above was taken on Highway 12, near Jones’ Corner.

This tunnel, under the CPR tracks which cross Highway 12, near Victoria Harbour, has been the subject of much controversy following the motor accident which took the lives of two young people in November. A coroner’s jury at an inquest in Midland into their deaths recommended flasher lights be installed. More recently Victoria Harbour council has urged that the tunnel be widened as a winter works project. [Nothing was ever done until the CPR abandoned their route in the late sixties and the roadway was re-aligned. Many more serious accident and deaths were to occur.]