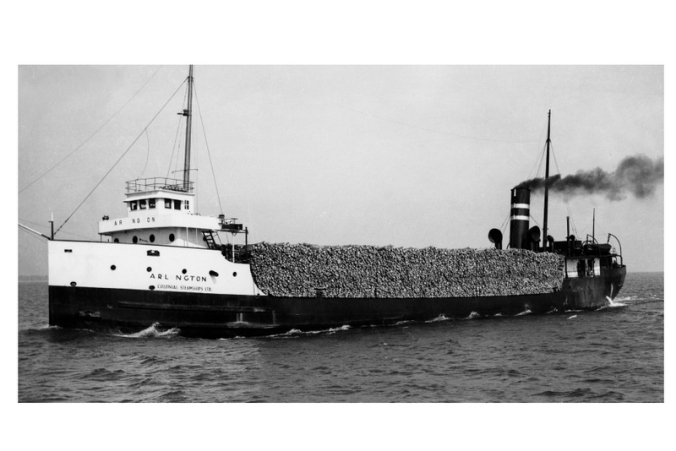 In the wake of the Arlington: The day she rose again in Midland Harbour.

The life and times of the Burke Brothers of Midland ON.

If you walked the streets of my town, Midland ON, any day and asked a resident about the sinking of the SS Arlington you would get a stare, that puzzling look and nod of sympathy that you are asking a dumb question. We have no old sailors occupying park benches under the railway canopy on the Town Dock any more; they, the railway and the old canopy are all gone.  Only a few family members remember that the two young junior hockey players, Ted Brodeur and Frank Swales, on their first trip ever as newly hired deckhands, were saved when their ship went down. Their ships captain, cooperating to keep them on a payroll all summer, being hometown players, so they could play for Midland next season, this was important stuff then, now forgotten. Nobody remembers that as soon as the hearings on the disaster were completed, spring of 1941, that no evidence of negligence, irresponsibility or responsibility was placed on anyone’s record, insurance was paid and the issue quickly passed. One family mourned the loss of a husband, father and brother, the Arlington’s Captain “Tatey Bug Burke”. But Canada was at war, greater tragedies were being reported every hour. Local young men were being killed far away from home, the community, as most would, moved on.

The S.S. Arlington was built in 1913 at Detroit Shipyard, in service called a “canaller”, steel-hulled, propeller-driven to accommodate Great Lakes narrow locks and river systems. She was 244 feet long and 43 feet in width, comfortably able to slide through the locks. In 1937 she readied for Burke Towing and Salvage Company, BT&SC (5) owned and operated by the Burkes Brothers Midland ON , and was equipped with the most modern navigational equipment available at that time. As new owners, brothers Captains Edward 1873 – 1958 and David Burke 1877 – 1941 persuaded their younger brother Frederick, born at Midland ON June 12th, 1885,  to become her captain. The Burke’s, of Irish descent were great-grandsons of a British Military Soldier who like many others took Military Land Grants in Canada upon retirement. They selected properties in and around the British Military and Naval Establishment at Penetanguishene, on Georgian Bay.  Fred, the youngest brother, was known as a most capable, intuitive navigator using his special intelligence to navigate safely.  He had an unusual nickname known to all as “Tatey Bug”, except to his face.  As a youngster, Fred had a speech impediment and could not properly say his name. Known to the family as Teddy, he said Taydey Bug for Teddy Burke, which over the years became Tatey Bug even when as an adult he had lost his impediment. At times due to his compulsive and very hyper nature, this name was considered apropos.

As the brother’s salvage, towing and barging business, of which they were well known as specialist over the entire Great Lakes area, declined, they became aware in the early 1930’s that they had to diversify, “moving ahead with the times”. For them, the Arlington’s principal use and profitability was to haul grain in the early spring and late fall seasons, and pulpwood in midseason when the grain business was not so busy.

For years Fred had captained tug boats for his brothers towing timber rafts and sailing vessels on Georgian Bay.  But his longing to captain larger steamships and out of respect for James Playfair, a Midland ON industrialist, who owned the Georgian Bay Navigation Company (GBNC), he took to their larger vessels. One of Fred’s big ships, the S.S. Glenorchy, delighted him as he was having a good season on her until the night of October 29th 1924 on Lake Huron, off the Lower Michigan shore, in heavy fog. The “Orchy” was struck by the S.S. Leonard B. Miller. The Miller, only partially damaged, carried the Orchy along allowing her crew to walk across their deck onto the Miller before the Glenorchy slid away, down. Fred was credited with heroism for saving an injured crewman on this occurrence, adding to the many tales that built his career as he had other groundings and mishaps that created his mystic. In 1925 we find him captain on a Playfair vessel the SS Glenisla. Then in 1926 following the transfer of GBNC fleet he became an employee of Canada Steamship Lines.

April 30th, 1940 as the Arlington departed the Lakehead, downbound for Owen Sound ON with a load of grain; in her wake fate certainly was riding with her. Another vessel the SS Collingwood, bound for Midland ON with a load of grain, was leaving just behind her. As the CSL ship captained by Midlander Thomas Carson followed the Arlington away, Carson decided to stay in her wake as he knew she was fitted out with better navigation equipment than he possessed. May 1st on Lake Superior he observed, in breaks in the snow storm, the Arlington was struggling. As the weather worsened he wondered at the changes of direction and reverses, but stayed his distance. Only when he realized she was in big trouble did he close. Through the snow storm and huge waves, he glimpsed Mate Junis Macksey readying lifeboats. Carson came to within 220 yards and prepared to take her hands aboard. Suddenly the Arlington rolled unsteadily to port, and then back to starboard away and down.  Recovered were 23 sailors excluding the captain who was not with them? It was not until they reached Sault St. Marie locks was Captain Carson able to send a message to Midland that the Arlington was gone. Upon the Collingwood’s arrival at Midland immediately an inquiry was scheduled for the following day. All survivors were cautioned to say nothing to anyone about the sinking. As they pulled dockside they found the dock heavily crowded with family, friends and observers. Security became very important.

The inquest started in Midland and continued for several months in different locations and I leave it for the reader to explore. My recommendation for the best synopsis read: True Tales of the Great Lakes by Dwight Boyer.

Everything changed, a year after the sinking for the Burke Company.  Captain David died suddenly leaving Captain Ed, the oldest brother, to run their affairs. He decided to shut down their company but finishing up the 1940’s and into the early 50’s he was often was called upon to assist with salvaging on the great Lakes. Dying in 1958 he spent his last years happily on the bay, aboard his private yacht, the Captain Ed.

And today what is heard of the Burke Brothers, their benevolence in our community or even their history here? Captains Edward and David are entombed in a family mausoleum in the old Military Cemetery of St. James on the Lines Anglican Church, Penetanguishene ON.

The once benevolent and accommodating Burke Company is no more. There are memorial plaques on the wall of St. Mark’s Anglican-Lutheran Church, 3rd St. Midland in memory of Captain David and Captain Frederick John Burke, not mentioned as “Tatey Bug”!  And on the lawn in front of the church, as one would enter, stands a tall white Carillion Tower in memory of Captain Edward and his wife Estelle. The bells toll every Sunday while the congregation recite the Lord’s Prayer. As we hear the bells and say the prayer does anyone present wake the Arlington, the Burkes or their history?  Perhaps they all pray to have a Collingwood in their wake? 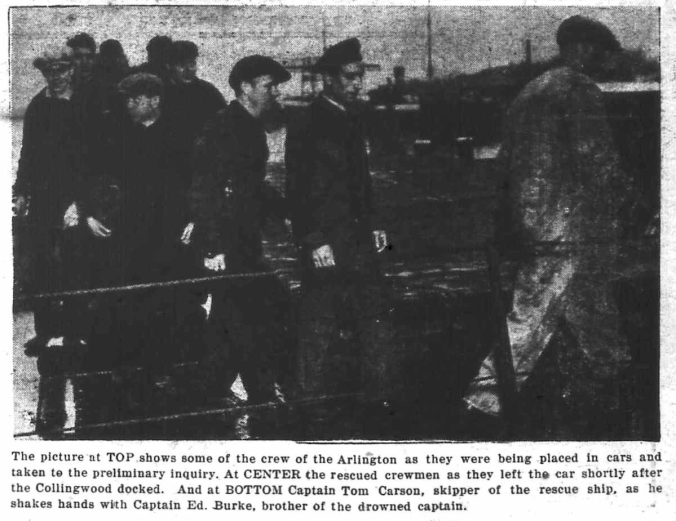 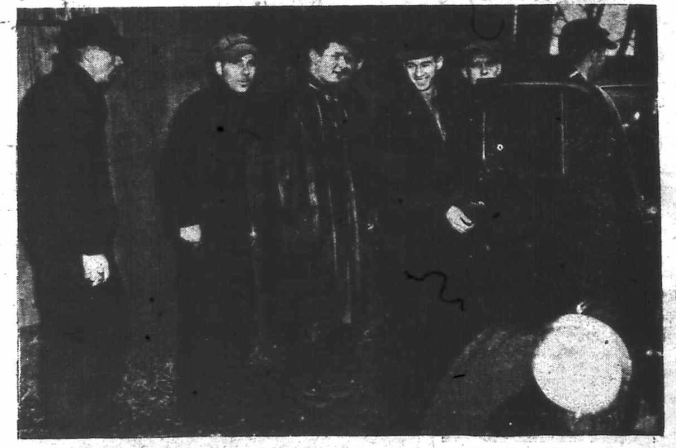 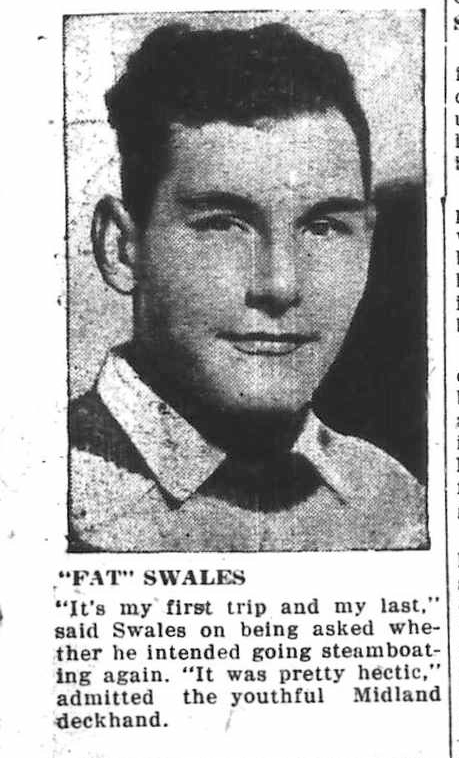 3 thoughts on “The loss of the S.S. Arlington – 80th Anniversary”