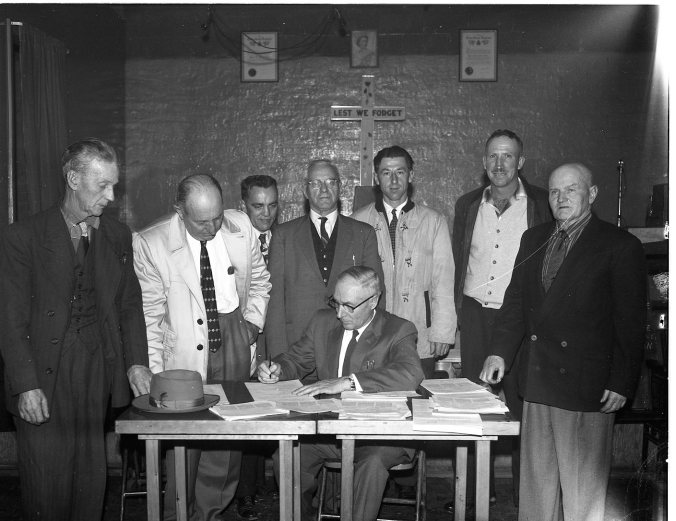 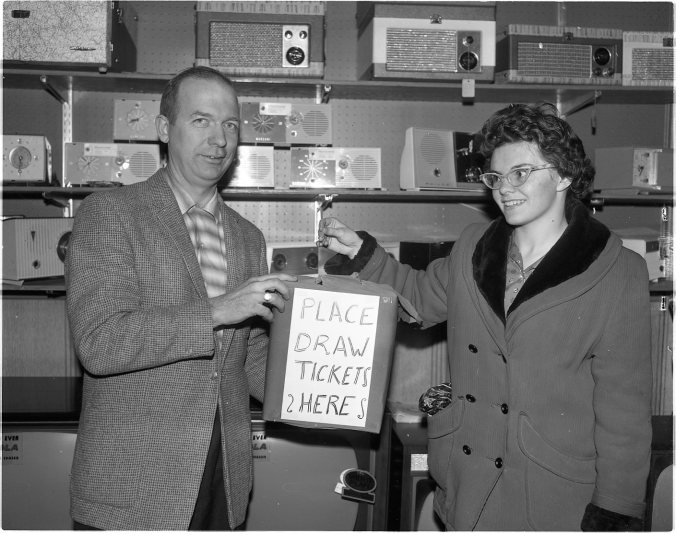 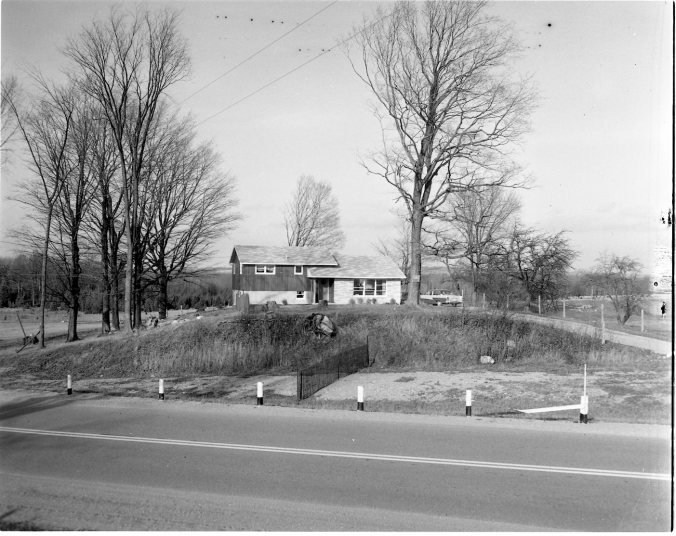 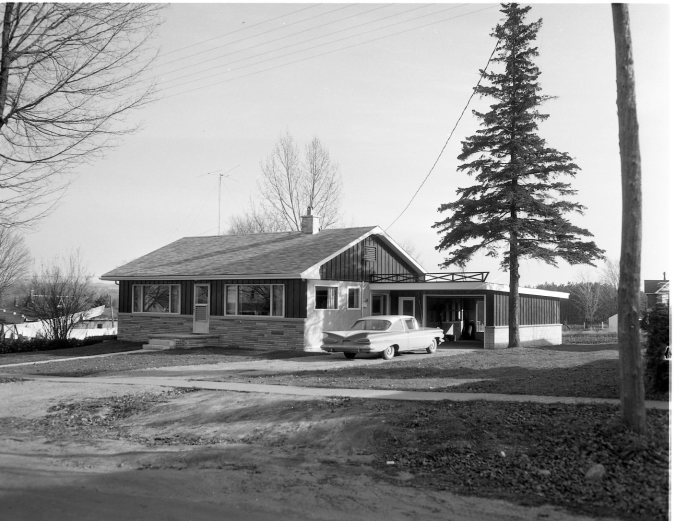 Some fine new homes have been built in Hillsdale recently, and the two above would look well in any community. Perched on a pleasant knoll in top picture is the home of Mr. and Mrs. Robert Scott. Lower photo is the new home of former Simcoe County warden Fisher Ganton and Mrs. Ganton. 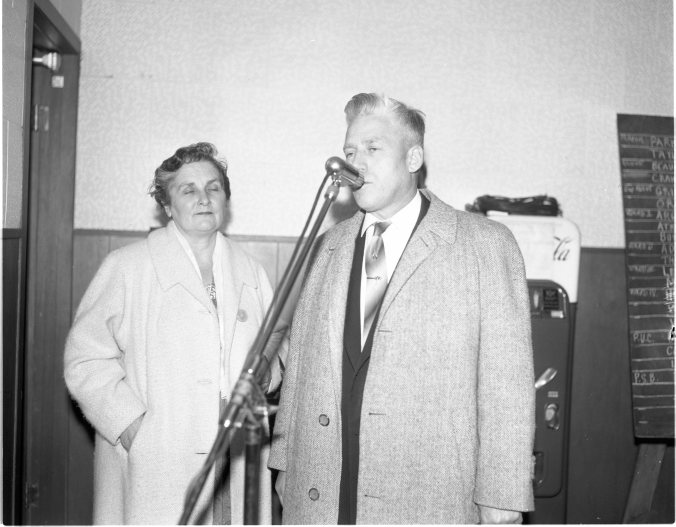 Winner in Monday’s election, Mayor Charles Parker expresses his thanks to the electors over radio station CKMP. With him is Mrs. Parker, whom the mayor said talked him out of retirement plans. 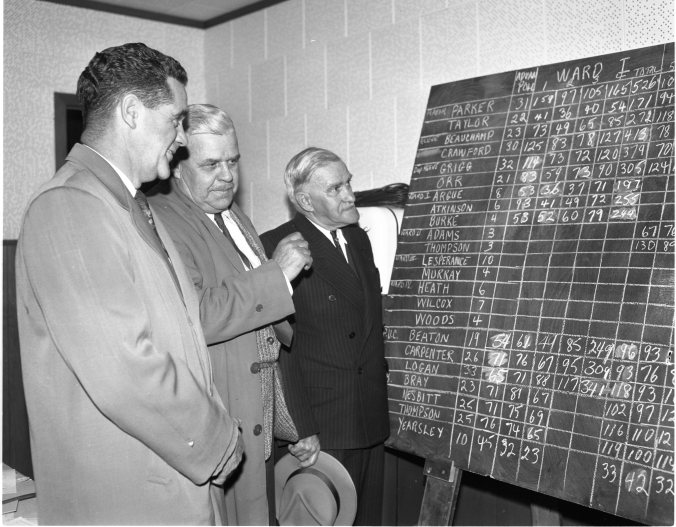 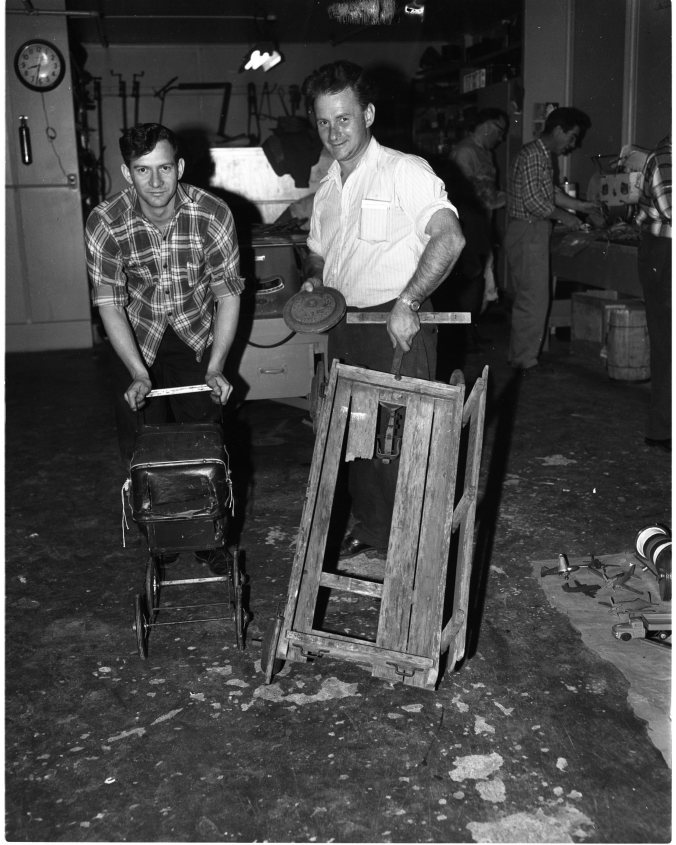 They look pretty hopeless now, but this dilapidated wagon and worn out doll’s carriage will bob up looking like new under some deserving tot’s Christmas tree a few weeks from now. John Dumais (left) and Bob Gidley are only two of the members of Pillsbury’s Midland staff who are devoting several nights a week to putting the old toys back in shape. 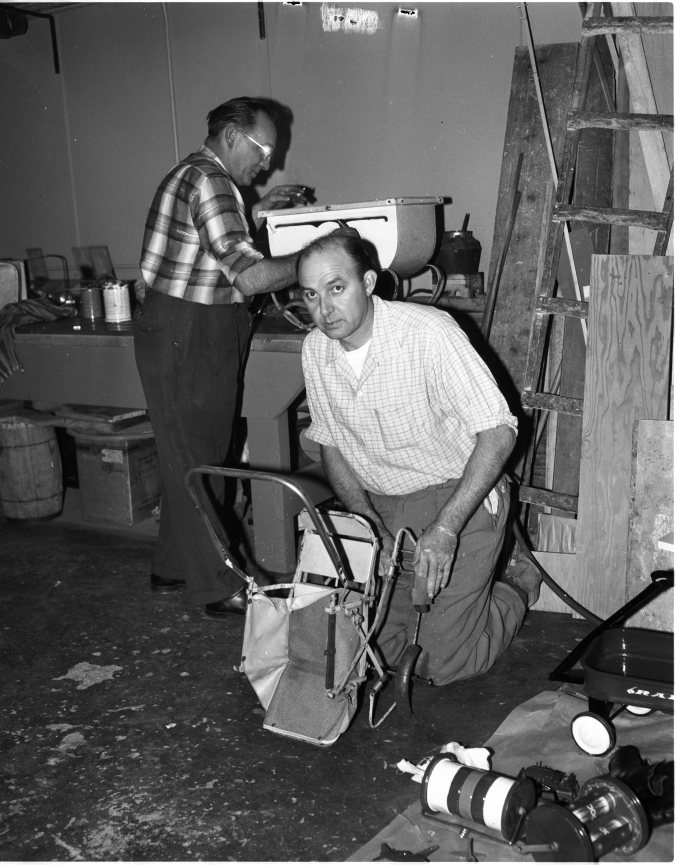 Many needy children in this area will have a little brighter Christmas this year through the work of staff members of the Pillsbury’ Canada Ltd., who have volunteered to make old, discarded toys look like new for redistribution.  Len Maheu sands some of the rust off a doll’s carriage while John Brandon puts the finishing touches on another nearly completed carriage. P.S. They can still use more toys. 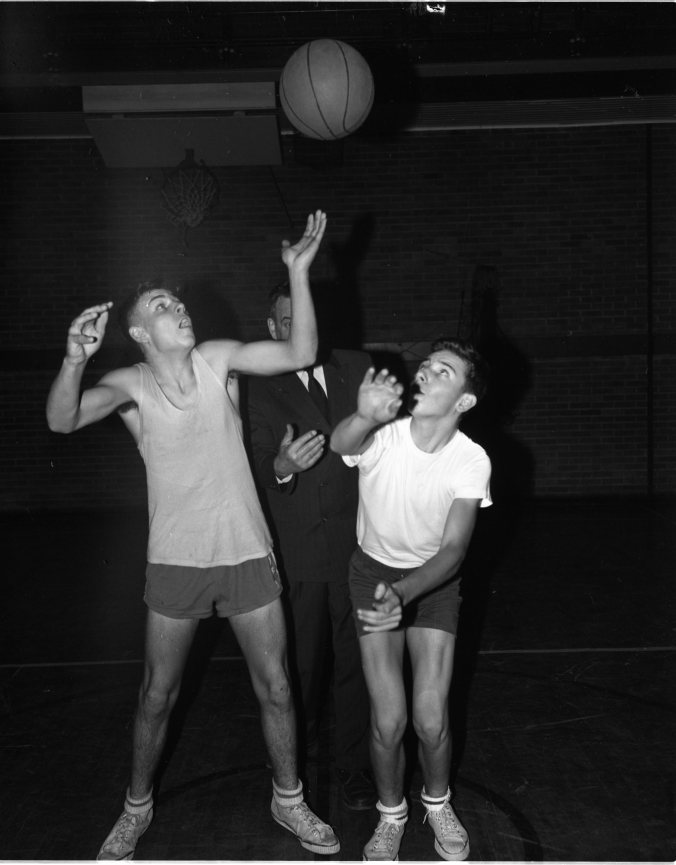 Little League basketball got underway at Midland YMCA this week and here Morie Whitcher, ‘Y’ president (behind players), tosses up the first ball for Paul Downer, left, and Wayne Holden to battle over. 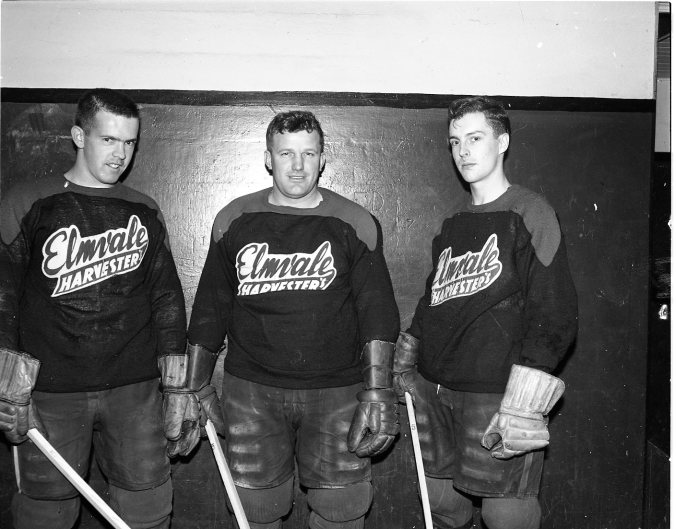 Elmvale Harvesters will be gunning for another Central Ontario group OHA intermediate “C” victory at Arena Gardens here tonight when they take on Stayner. Three of the black-shirted Elmvale stalwarts are, left to right, Ron McAuley, Bob Stacey and John Cole. Stacey is a defenceman and the other two lads are forwards. 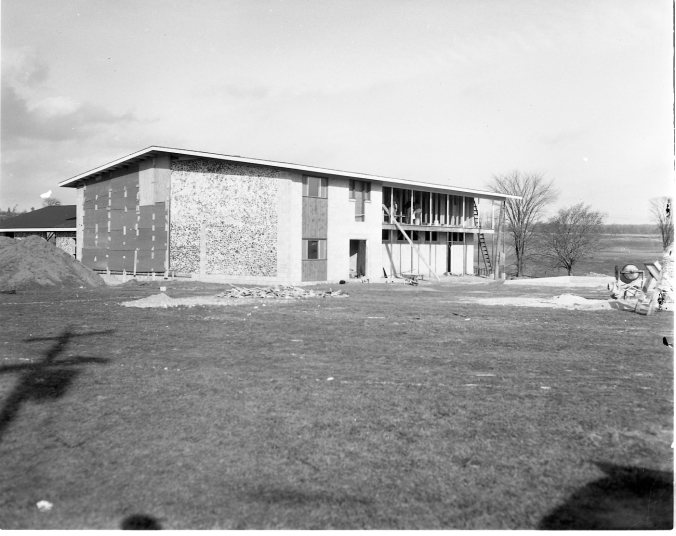 his large new clubhouse will provide excellent facilities for members and visitors at Brooklea Golf and Country Club on Highway 27, south of Midland, next summer. There is also a swimming pool just out of the picture to the right. 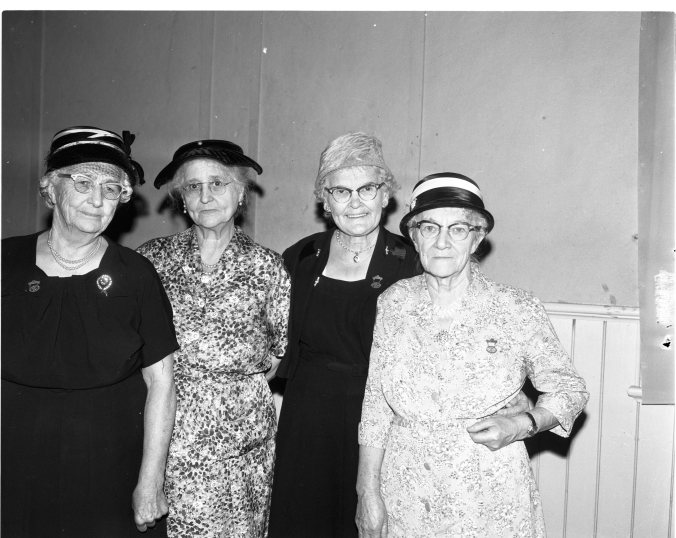 Many years of service to the community have been given by these members of Crossland Women’s Institute, gathered for the 50th anniversary ceremonies Wednesday. They are, left to right, Mrs. Jim Strath, Mrs. R. T. Wallace, Mrs. J. H. Locke, Stayner, and Mrs. Harry Borthwick. Mrs. Locke is a life member and the other three women are charter members of the organization. 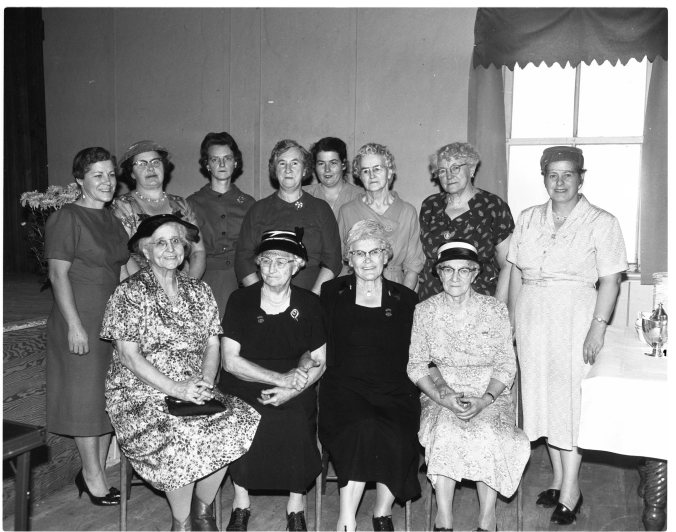 Members of Crossland Women’s Institute are seen above just before the start of ceremonies marking the 50th anniversary of that Centre Flos organization. First winter’s storm of the season failed to cut attendance at the event. [The ladies in this photo were not identified. We know the four in the front from the previous photo and the woman in the very middle back is my wife’s wonderful aunt, Jean Webb of Wyevale, deceased in 2014. We would appreciate more names for our archives.] 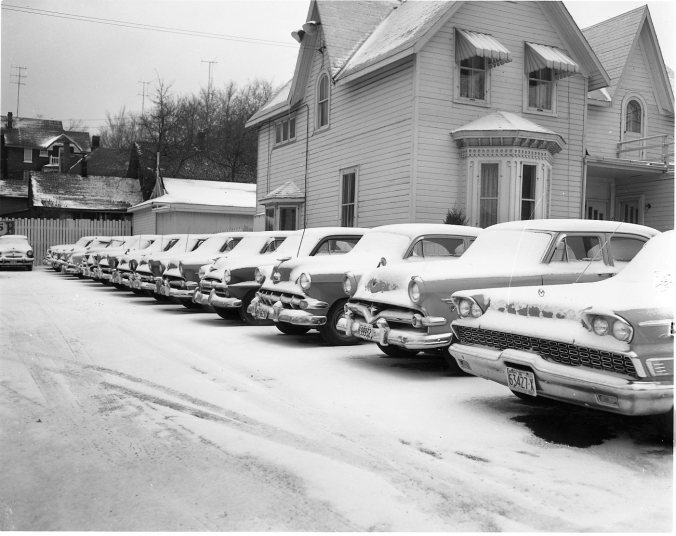 The first snow fall of any account this season hit this area Wednesday, covering the roofs and windows of these cars on Lionel Bourgeois’ car lot. But North Simcoe received only a fraction of the 3 1/2 feet of “the beautiful” dumped on the Buffalo area and to a lesser extent the fall at the Lakehead. 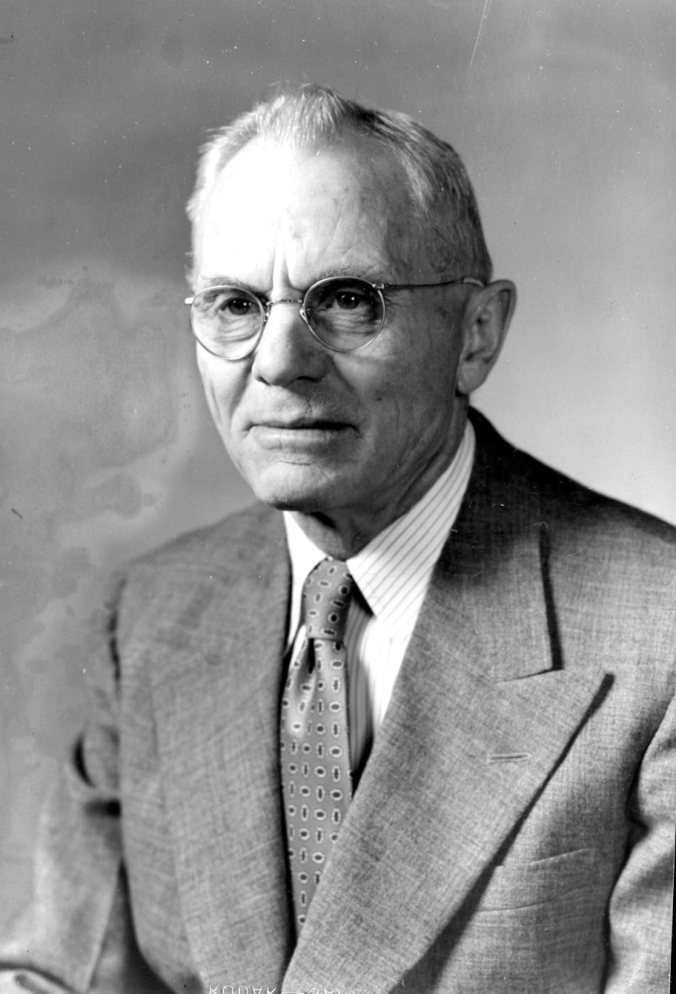 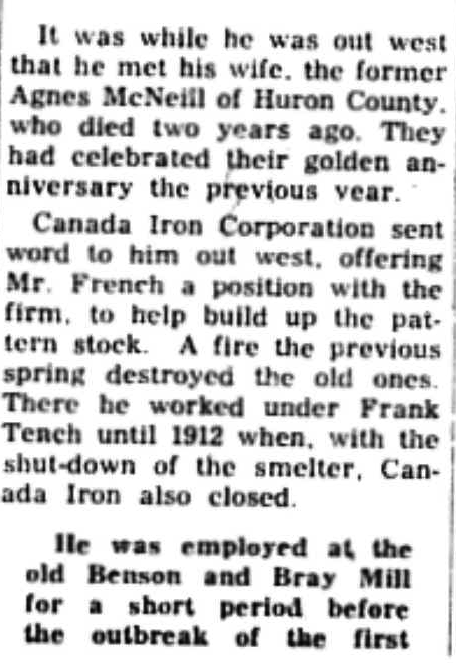 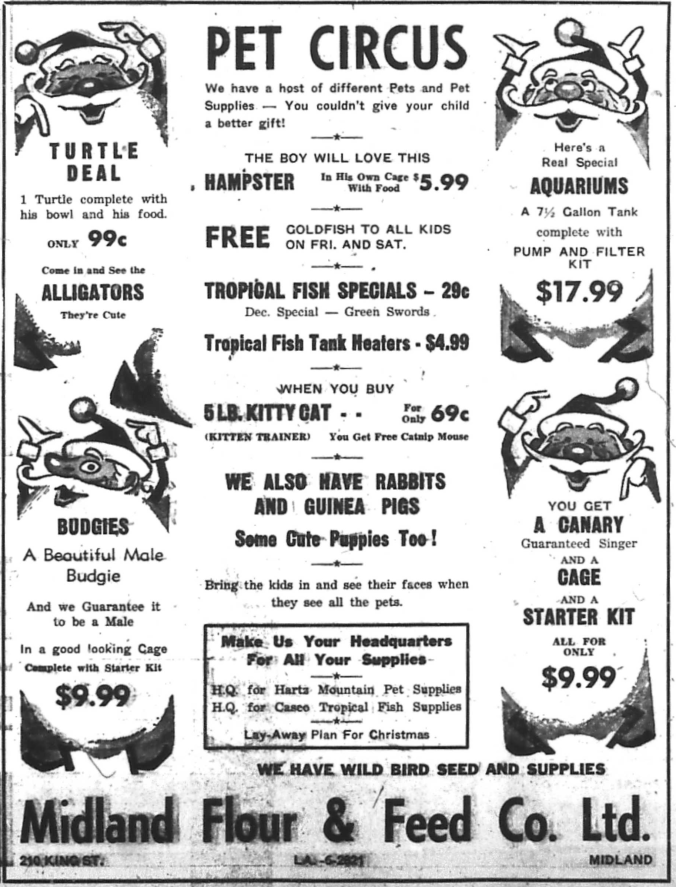 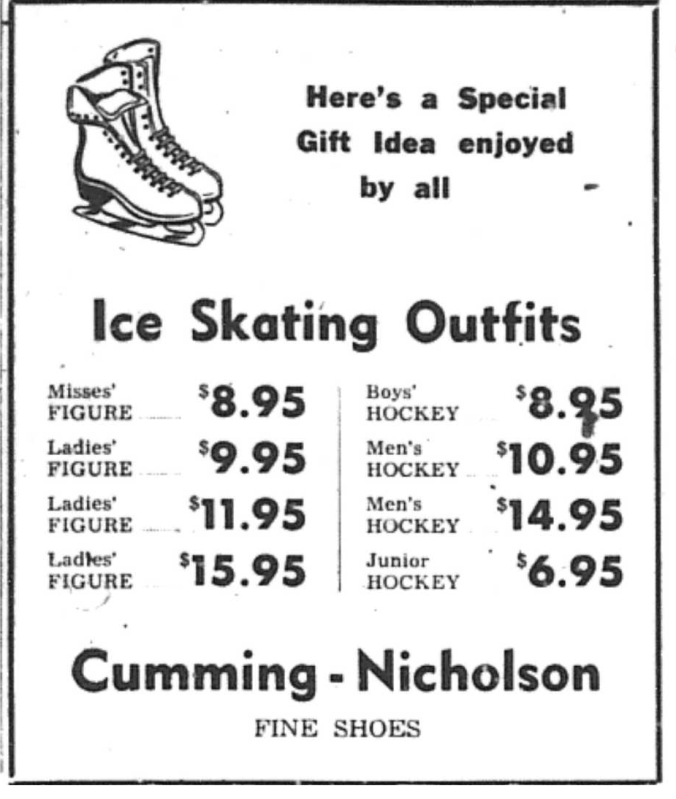 A suggestion that a drainage ditch running through Tiny Township, which empties into an area where Midland obtains its water supply, carries more than just drainage water. This was voiced at Saturday’s meeting of Tiny Township council. Mrs. M. Marchand asked council what steps were being taken to have the ditch cleaned. She said, “You  don’t know all that goes on around that ditch. Some people even run their toilets into it. They don’t have septic tanks.” The ditch has its beginning on one of Mrs. Marchand’s farms along the south border of the town of Penetang. It runs from there in a south-easterly direction behind several houses on the west side of Highway 27, crosses the highway, and eventually empties into the swampy area in the Midland Public Utilities watershed area where wells and reservoirs supplying the town’s drinking water are situated.

Improvements to various government docks, floats and warehouses in Midland are now being considered by authorities of the Federal Department of Public Works. This optimistic news was the highlight of a public meeting in Midland’s municipal auditorium last night. It was broken to the packed auditorium by Ward 1 aldermanic candidate Arthur W. Argue. Mr Argue said he had received this information in a letter from T. B. McLennan, assistant district engineer for the department in Toronto. In his letter Mr. McLennan, said he referred in particular “to the system of floats between piers C and D which require complete renewal with a new type of float now being designed in this office” Mr. McLennan said he hoped a considerable portion of the work can be done this winter so conditions will be improved for the opening of navigation in 1961.

A 63.15% overall vote gave Charles N. Parker a 1,060 majority over his mayoralty opponent Les Taylor in Midland’s civic election Monday. Mr. Parker received 1,999 and Mr. Taylor 939. The record turn-out of electors (14.05% more than last year) brought a see-saw battle for the reeveship and deputy-reeveship that hung in the balance until the last of the 15 polling sub-divisions had been reported.

Penetang council agreed at its meeting Monday night to take an option on land known as Lions Park. Some time ago, the land was sold by the Lions Club for a housing sub-division. Recently, the property had been offered back to the club, to be used for park purposes.

Bay Mills Ltd. Midland, and Local 1033, Textile Workers Union of America, have concluded a new contract. It is to run for two years, effective from October 24, 1960. This newspaper was informed that the new contract calls for wage adjustments affecting about 10 employees, of 1c to 4c per hour, overall wage increase of 4c per hour during the first year of the contract, and 2c per  hour during the second year; company to pay 50 per cent of the health and welfare plan instead of 3c per hour worked, effective Jan. 1, 1961. In the second year of the contract, a reduction in hours in some departments from 433 hours to 424 hours, with same take home pay. Increase in the period an employee is on probation from 20 days to 60 days; clarification of some clauses in the existing contract.

TUG “MARY STEWART”
Dear Editor: The single – screw wooden steam tug Mary Stewart, Official No. 85415, was built in 1882 as the “Waubaushene” at St. Catharines, by the Royal Navy Maltese shipbuilder Louis Shiekluna, and registered at that port. Her length was 71 feet, width 18.2 and depth 8.8 feet, gross tons 97.34. She had a single cylinder high pressure engine built by Capp Brothers and Batty of Hamilton, 100 horse power with 22-inch stroke and cylinder 18 inches in diameter. In 1911 her registry was transferred to Midland, as owned by D. J. Burke of Midland. Her name was changed to D. J. Burke and afterwards changed to Mary Stewart. In 1917 she was purchased from D. J. Burke by the Ontario Rock Co Ltd. of Toronto and in 1918 was sold to Canadian Stewart Co. Ltd. of Toronto. In 1919 her registry was transferred to the port of Toronto. On July 6, 1921, she was  sold to Toronto Harbour Commissioners and on April 23, 1930, was sold to Russell Construction Co. Ltd of Toronto, becoming their tug #2. Her register was closed Feb 11, 1949 following advice from the owners that she had sunk in Lake Ontario in December, 1940.   W. R. Williams.

And a quick look back to 1955 and the Midland Red Wings. 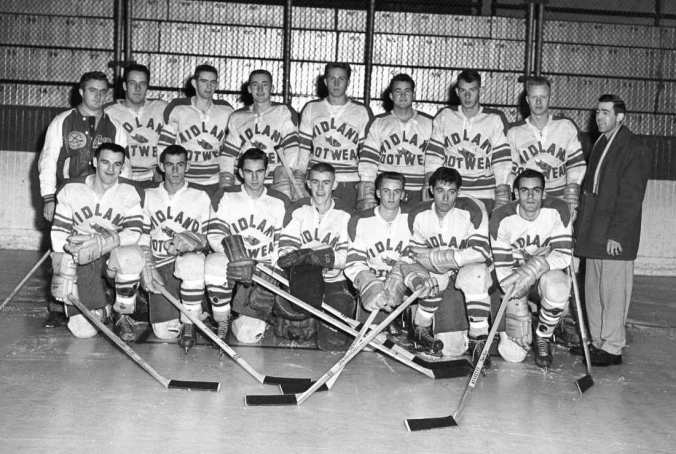 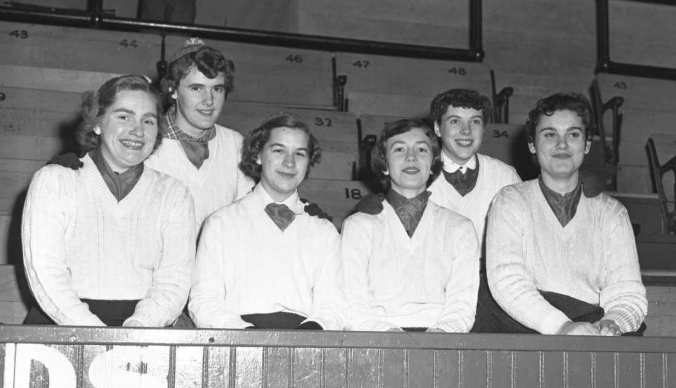