Looking pleased at the prospects of taking part in the Ontario junior badminton championships in Niagara Falls next month are these young members of the Midland club. Left to right are; Ron Church, Jim Cleaver, Victor Heller, John Delaney and Bob McLaughlin. The Niagara Falls meet is slated for Feb. 3-5. 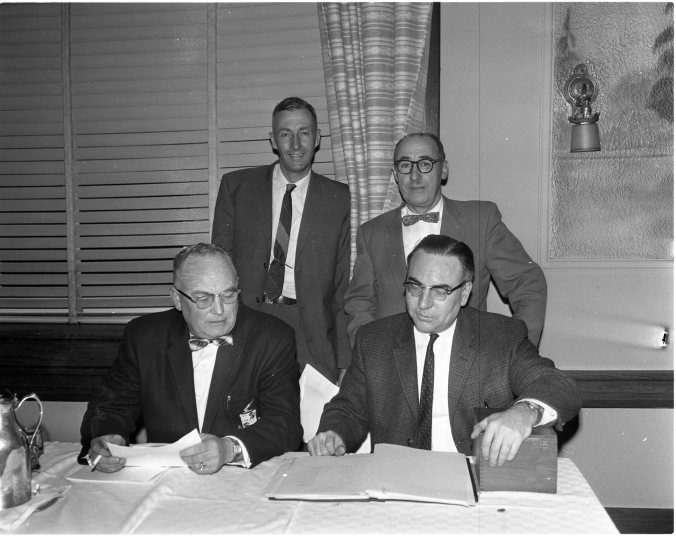 New officers of Midland Chamber of Commerce examine some of the reports presented at the annual meeting Wednesday night. Seated are William Orr, left, the new president and R. B. Moffat’, general-manager. Standing are James Playfair, 1st vice-president and E. C. Christopherson, secretary-treasurer.

These young girls are hard at work at Midland Garrison Badminton Club these days, getting ready for the Young Ontario junior badminton championships to be held at Niagara Falls, Feb. 3-5. Seated, left to right, are Marie McLaughlin, Arlene Staruch and Margaret Ann Kearns. Standing are Margaret Taylor and Elaine Binkley.

No, it’s not stuffed, says Joe Huston Sr. of the big Arctic owl he’s holding at his home, 34 Victoria Street, Midland. Joe found “Jim”, the owl, at the bottom (inside) of the big smoke stack at CSL elevator some three months ago. “Jim” was in pretty bad shape, with one foot missing and a wing badly damaged. Now Jim has the run of a big shed at the back of Mr. Huston’s home, where he devours some two or three pounds of meat tossed his way daily. It doesn’t pay strangers to get in the way of his one good claw, or his equally powerful beak. Mr. Huston is thinking of turning Jim over to conservation officials later, when Jim’s bad leg heals. 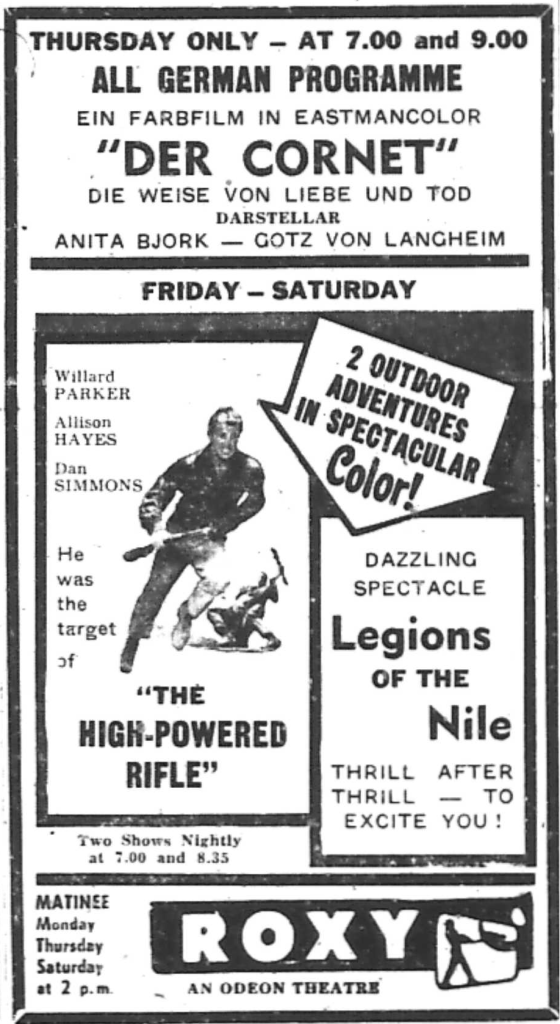 Thanks to Wayne Holden for supplying all the names listed below. 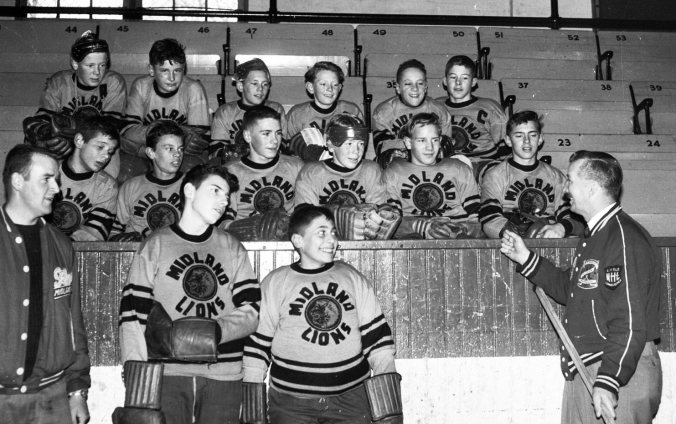 Free Press Herald headline of January 25th, 1961.
Efforts are being made to have Simcoe County council consider other ways and means to help the town of Midland in its recent loss of a proposed grant of $111,577 from the county, to retire debentures issued in connection with the building of the new St. Andrews Hospital some years ago. Early in its January session, county council was informed the Ontario Municipal Board would not sanction the grant, passed favorably by the county last fall. The OMB said it could not find any statutory authority which would enable the county to make the grant. On Friday, Reeve Percy Crawford of Midland introduced a motion asking for a review of the correspondence between the OMB and county officials, in hopes of finding some way to assist his municipality. Reeve Crawford asked, and was given, permission to discuss the matter with the finance committee during the interim until council meets again. Feb. 7. A special meeting of Midland council Monday night decided to submit photostats of all correspondence and documents pertaining to the proposed grant, to town solicitor Douglas Haig. Mr. Haig is being asked to study the proposal and to advise council what subsequent action and procedure should be followed to enable the town to defend its position.

County Herald headline of January 28, 1961.
Criticisms and “insults” hurled at Midland Chamber of Commerce in recent months were termed “political hogwash in the main” by its retiring president, E. H. Nicholson, at the annual meeting of the chamber Wednesday night. “I listen in absolute astonishment to the direct and ridiculous insults being hurled at the chamber, and have been severely criticized this year for not replying to these,” said Mr. Nicholson. “But I felt the good people of Midland knew this was only political hogwash in the main,” he said. “The people are not stupid, and they realize that the chamber has made every possible effort to encourage progress and make Midland a better place in which to live. “What could be more ridiculous than the chamber of commerce deliberately discouraging high wages? Everyone knows that higher wages mean more dollars in circulation, more for me and more for you,” he declared. The retiring president said no industrial or business lead has gone without a thorough investigation.

People who can afford to drive cars do not need relief. This was the gist of a motion approved by Midland council at a special meeting Monday night. Council has decreed in a motion that all persons on relief who own cars, must turn in their ownership certificates and licence plates to town authorities. The motion passed unanimously. The motion came on the heels of a discussion of welfare problems, during which it was revealed that at least one recipient of relief funds had been driving a car. Reeve Percy Crawford wondered whether council had the authority to take such action. Pointing out that he agreed with the principle of the motion, he asked if council could force a person to turn in the licence plates if he refused. Clerk Wm. A. Hack explained that council has the right to determine who will receive relief and in determining this it must consider all factors, one of which would be whether a person who can operate a car is in need of public assistance. It was the consensus of council that anyone who can buy gasoline and licences for a vehicle does not require relief. Since welfare payments are made in cash, it was decided that one sure way of preventing money being spent on gas would be, to require that markers and certificates be turned in. Mayor Parker told council that the town had the heaviest welfare case load in 15 years. “Now is the time to lay down the rules for relief recipients,” he said. Council was informed there are 223 persons on the welfare rolls. Of this number, 45 are heads of families, 155 are dependents and 23 are single persons.

A well-known resident of Midland for a number of years, Richard Alexander McCutcheon, 75, died of asphyxiation at his home, 317 Manley Street, Sunday morning. Coroner Dr. Charles Talbot of Port McNicoll, who attended the scene, announced a verdict of accidental death. Chief George Wainman said no inquest is likely. As was his usual habit, Mr. McCutcheon went out to his garage around 10.30 a.m. to let his car run for a while. Strong winds are believed to have driven the deadly carbon monoxide fumes back into the garage. He was found by his wife about an hour later when she went to call him for dinner.

COLDWATER — A tragedy was averted here last week when Betty Miller, 7, eldest daughter of Mr. and Mrs. Douglas Miller of Eplett Street, rescued her playmate, Terry Hamilton, also 7, after the latter had crashed through the ice of the Coldwater River. The Hamilton girl had ventured on to the ice after school, near the back of her home, to retrieve a plaything, when the ice gave way beneath her. She tried in vain to grab the jagged edges of the ice to pull herself out. Betty, who was standing on the river bank, disregarded her own safety to go to the aid of her friend and was able to get her out of the hole in the ice and back to shore. By this time, Mrs. Hamilton, who had heard cries, reached the scene and rushed her daughter indoors where steps were taken to offset effects of the chilling plunge.

Just about the happiest man in Midland over the weekend was “Ted” Boon, a constable with the OPP detachment at Victoria Harbour. After playing the game for some 15 years, Ted finally came up with a perfect cribbage hand — 29 points — while playing against Herman Livingston. Ted had the jack of spades and three five-spots in his hand and the five of spades was turned up, bringing about the maximum count. Const. Boon keeps telling his friends there was no significance to the fact he was the dealer on this occasion.

25 YEARS AGO
A public day of mourning was declared Jan. 28, to mark the funeral of King George V who died Jan. 20. * * * Midland Public Utilities Commission did not accept an offer of cheap power from Orillia at it was considered “impractical and impossible” by PUC commissioners. * * * In a report published of the Ontario government public accounts it was revealed that for the five months ending March 31, 1935 Midland had paid $90,510 in direct relief. * * * It was announced by Hon. David Croll, Ontario Minister of Municipal affairs that Midland and Penetang, whose bonds are in default, would make some interest payments to the bondholders. * * * Simcoe County had a deficit of $83,000 for 1935. Reeve W. J. Cunningham of Alliston reported to County Council. * * * Sponsored by the Victoria Harbour Athletic Association and the town council and financed by public subscription a new open air rink was officially opened at the Harbour. * * * Elk, two does and a buck were brought from Wainwright Sask., and placed on Beausoleil Island. * * * A Gray Coach bus and two cars carrying police court officials from Barrie to Midland were snow bound at Elmvale over night but were able to complete their journey the following day when the highway had been plowed. * * * The Chicago, Duluth and Georgian Bay Transit Co., announced that it had decided to include Midland as a regular port of call during the ten-week summer season for its luxury cruise ships the North and South American.

Following a traffic survey made by the Ontario Department of Highways at the intersection of Main and Robert Streets, Penetang, a report submitted to Penetang council recommends against installation of traffic lights as a means of controlling the problem. The report states traffic movement through the intersection is impeded by: excessive parking close to the intersection, lack of access control to the service station on the southeast corner, poor approach alignment and stop sign placement on Robert Street, the waiting buses between Peel and Main Streets on Robert, and lack of pavement markings.

Every year as we try identify the photos from the Free Press collection we are left with negatives that were not used in the newspaper and faces we cannot identify. Please comment if you know any of these people photographed in 1960.