Due to time restraints we will forgo the news portion of our series for the first two weeks of September 1961 and do a pictorial review instead. 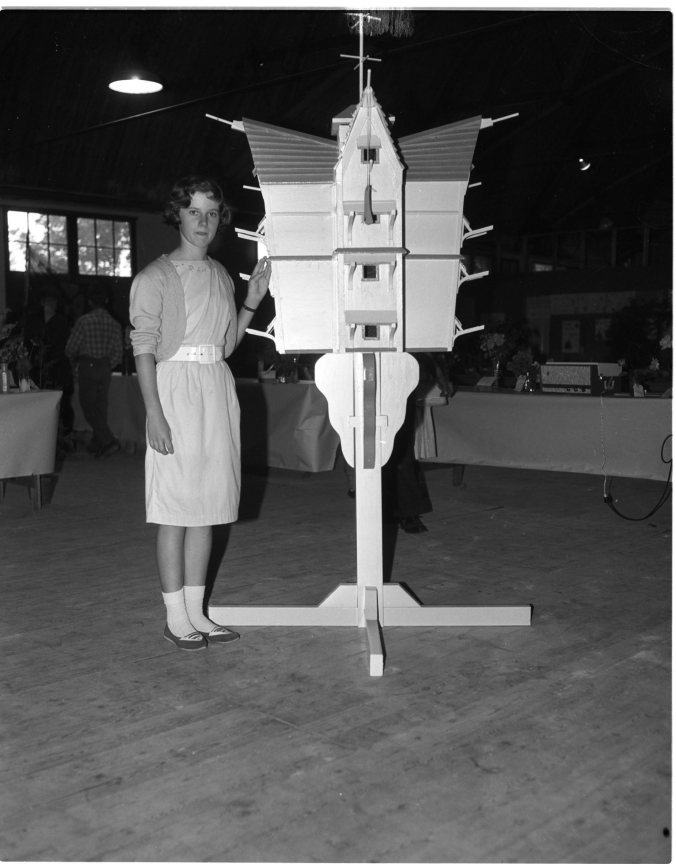 One of the eye-catching displays on view at the Midland Horticultural Society “Festival of Flowers ’61” last week was this huge apartment-style birdhouse for martins. Pretty Marion Allinson of Hamilton gives an idea of the size of the house. 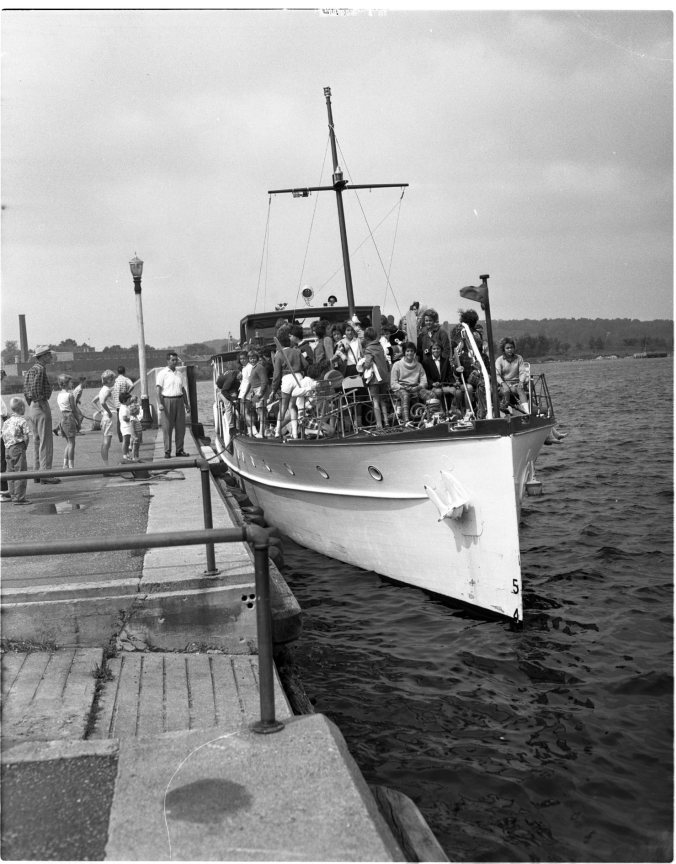 When the Haidee sailed into Midland Tuesday noon with these girls aboard it marked the end of another banner season at Camp Kitchikewana, operated on Beausoleil Island by Midland YMCA for more than 30 years. Many parents were on the dock to whisk the youngsters home—and back to school. 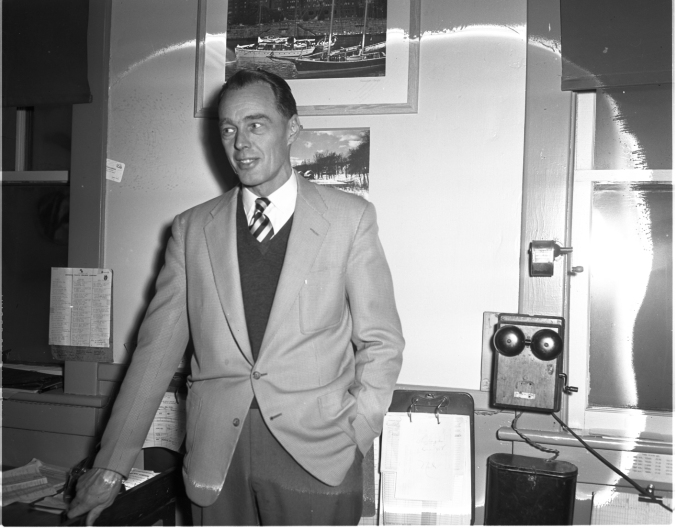 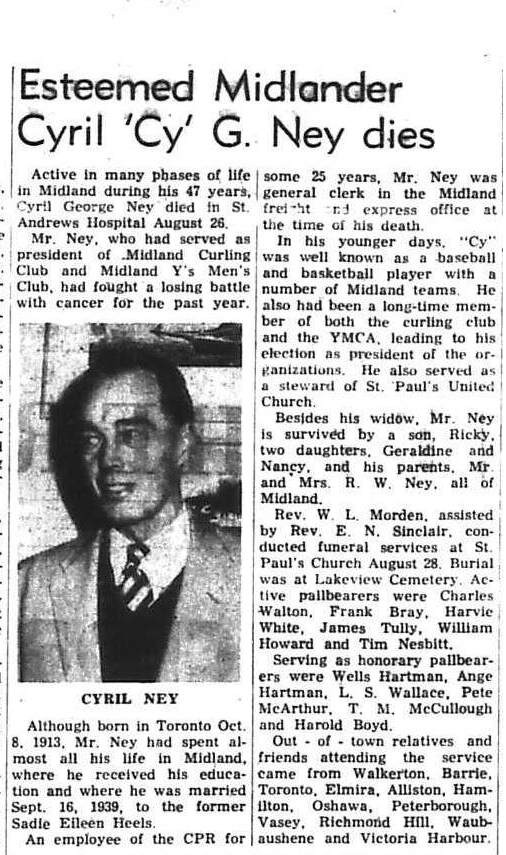 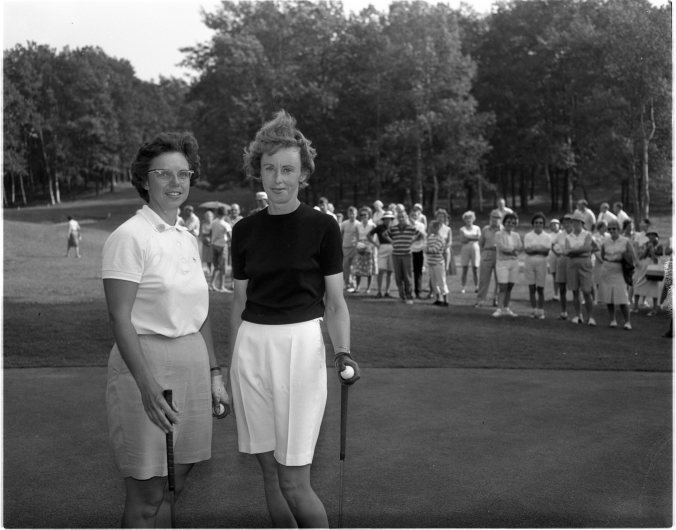 Winner of the Simcoe County ladies’ golf championship two years ago, Mrs. Cecil English of Midland (left) regained her title in matches played at Midland Golf and Country Club last week. Her losing opponent in the final match was Mrs. Norman Holmes of Orillia. The picture was taken just after Mrs. English closed out the match on the 15th hole. 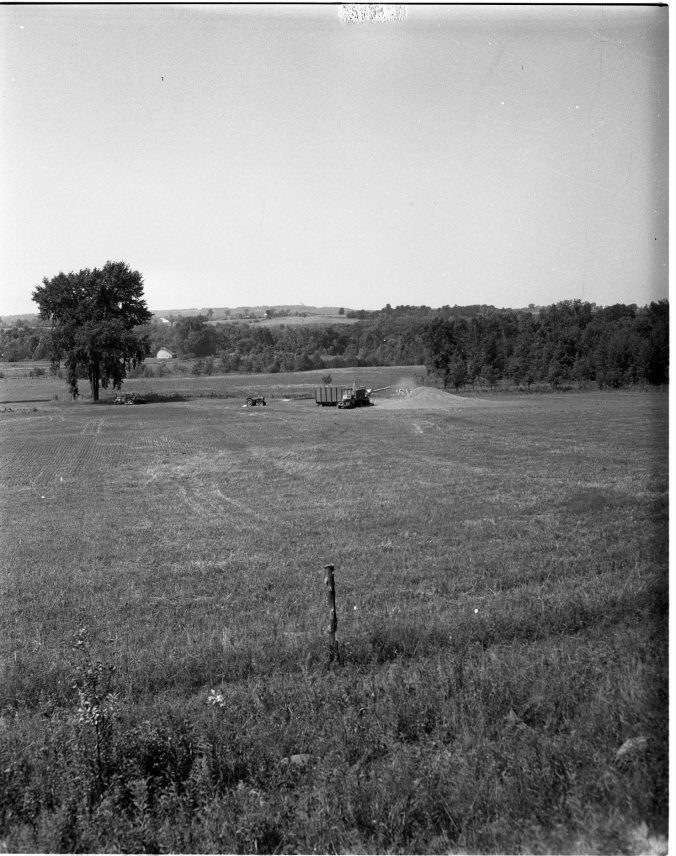 Typical of other scenes throughout North Simcoe at this time of year is this picture of farmers threshing crops in a field. The threshing outfit, center background, was hard at work in a field near Wyebridge this week. 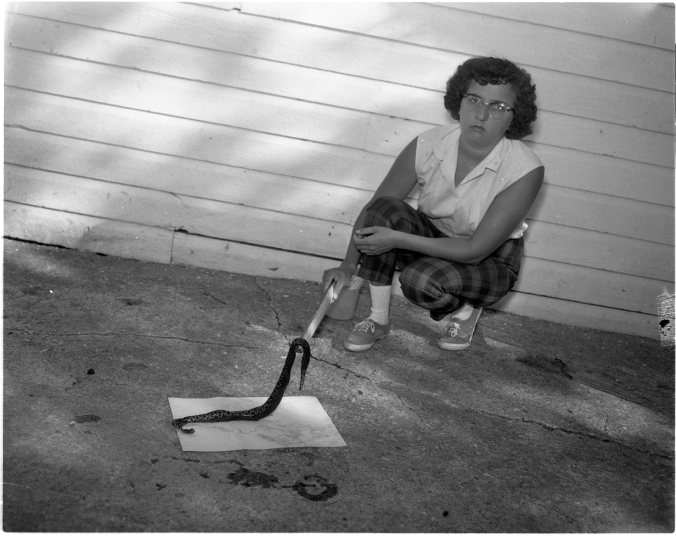 The best rattler is a dead rattler most citizens believe. Here Mrs. Julian Lahey of Penetang displays a 26-inch rattlesnake her husband killed near their cottage on Cognashene Bay. 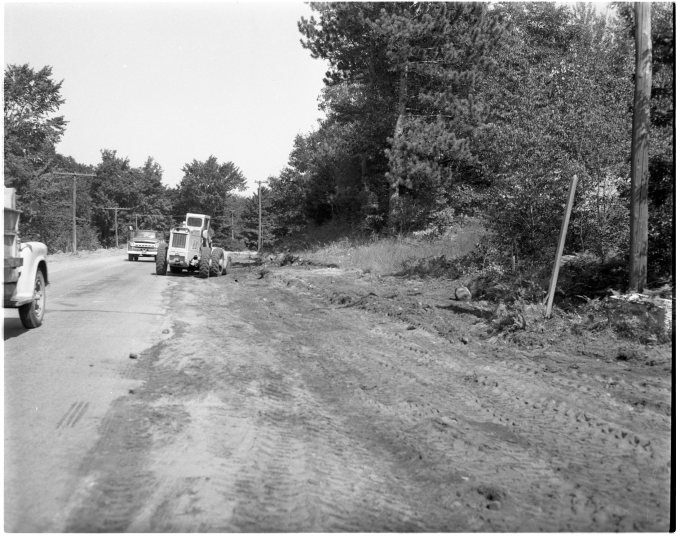 Long awaited by Midlander’s especially, the widening of County Road 2 (Vindin Street) between Midland and Highway 27 is now underway. When the road is widened and the curves straightened Midland officials hope it will take care of much of the truck traffic which now travels along King Street. 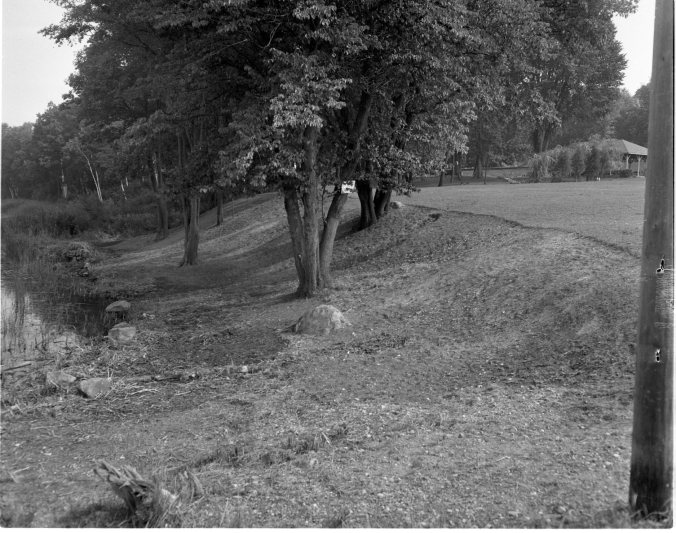 Many notable improvements the landscaping have been effected at Martyrs’ Shrine, Midland, in recent years. Now workmen are starting to clear up the shoreline along the Wye River. Picture above shows progress to date. 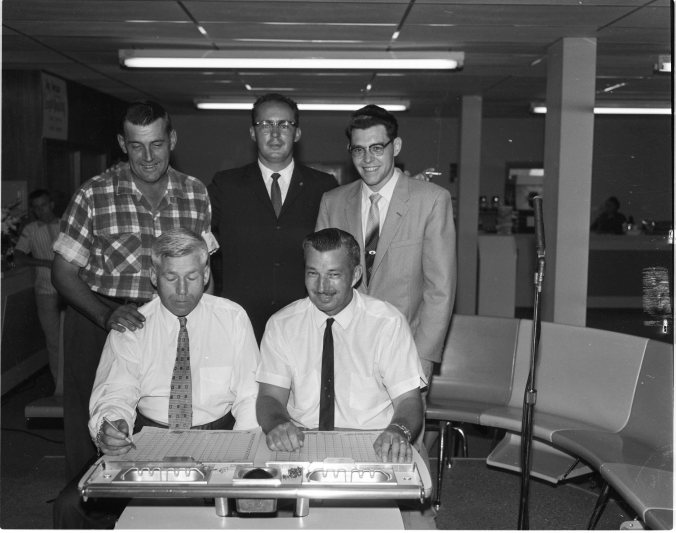 Everybody seems pleased with their scores at the official opening of the new Huronia Lanes in Midland Wednesday night. Seated are Mayor Charles Parker, left, and Rev. Len Self; standing, left to right, Alderman Oliver Lesperance, Harley Perkins, representing the firm which installed the new alleys, and Glen Campbell, manager. (Above Campbell Auto Supply in 1961, lately the Rec Room, corner of Third and Bay)

Midland’s newest recreation center, Brooklea Golf and Country Club, sparkles in the late summer sun. The colorful clubhouse and attractive swimming pool caught the eye of many tourists passing by on adjacent Highway 27 this summer. 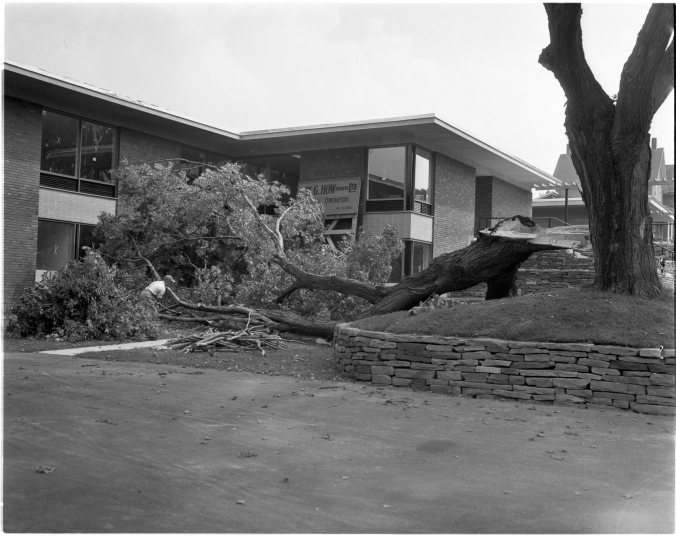 Last Wednesday’s violent wind and rain storm brought this huge maple limb crashing down on the grounds of Georgian Manor in Penetang. The branches fell just short of the big windows in the new section of the building, being rushed to completion. 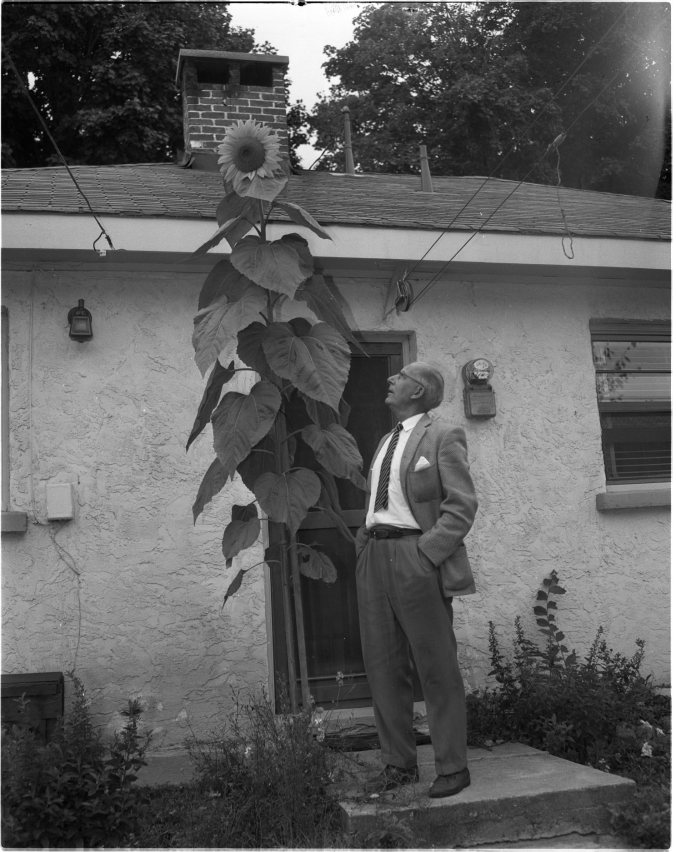 This giant sunflower is apparently a gift to Mr. and Mrs. Stan Harman, Russell Street, from the Grosbeaks they feed all winter. In any event Mr. Harman says the 10-foot tall specimen was not planted by human hands. Some of its leaves measure 18 inches across. 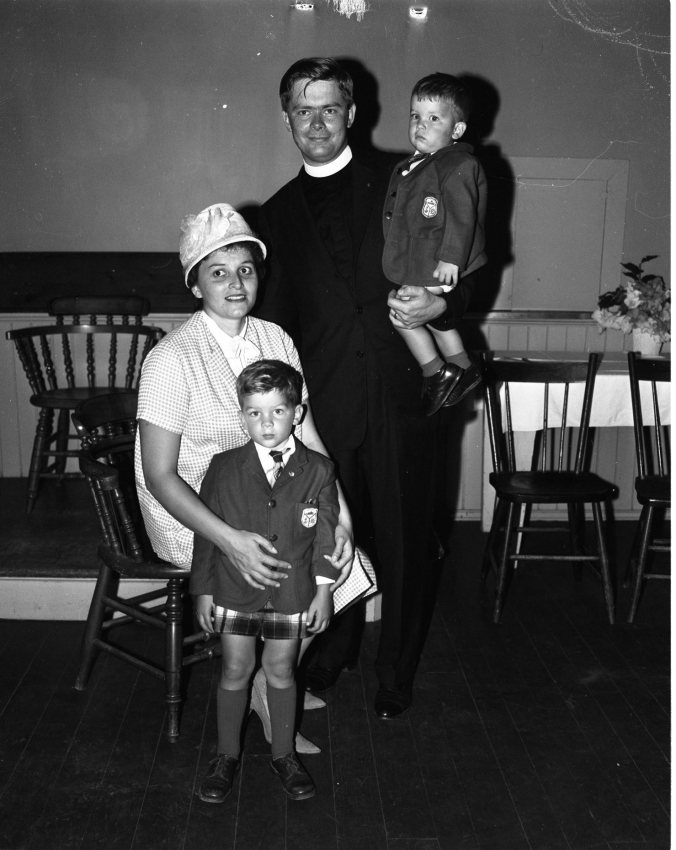 No strangers to Penetang are the new Presbyterian minister, Rev. Alan Ross, and his family. Mr. Ross was a student minister at Penetang before taking his first charge at Assinaboia, Sask. Mrs. Ross served as a nurse in Penetang General Hospital and the two boys, Alexander (Sandy), 3, and Jamie, 1, were born in Penetang. 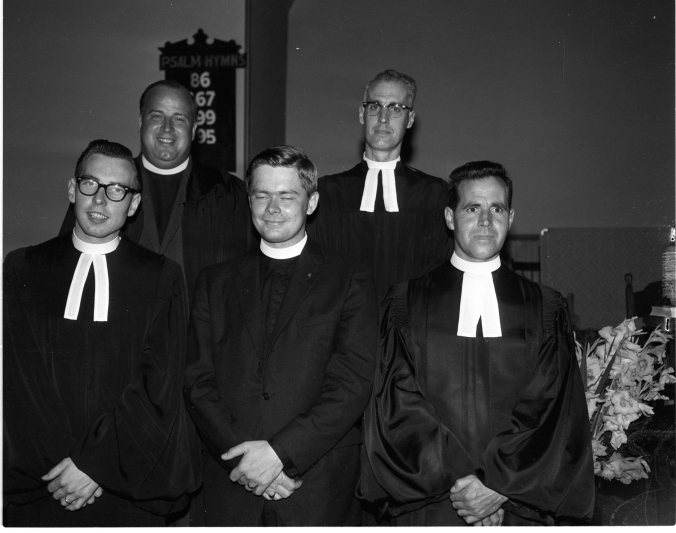 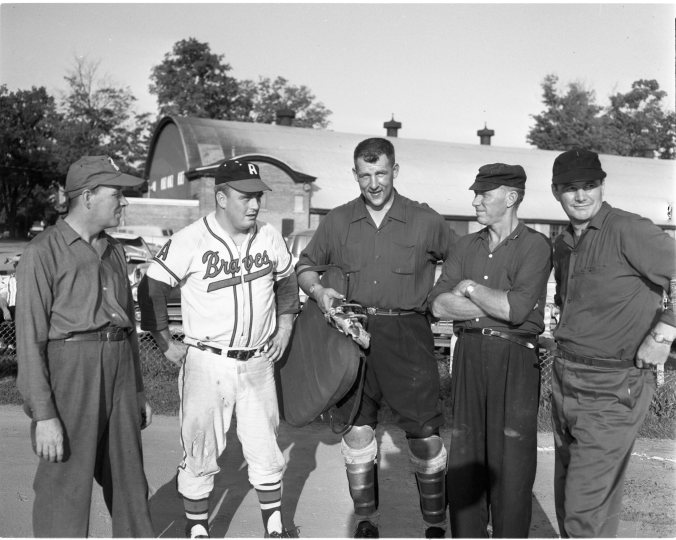 Umpires and coaches above are ironing out the ground rules prior to the game Thursday night in which Midland Indians eliminated Alliston Braves in the South Simcoe Baseball League semi-finals. Left to right are Bun Deschamp, Midland and Bill Gray, Alliston, coaches; umpires Ted Watson, Barrie, and Bill Gowan and Reg Westbrooke, Creemore. 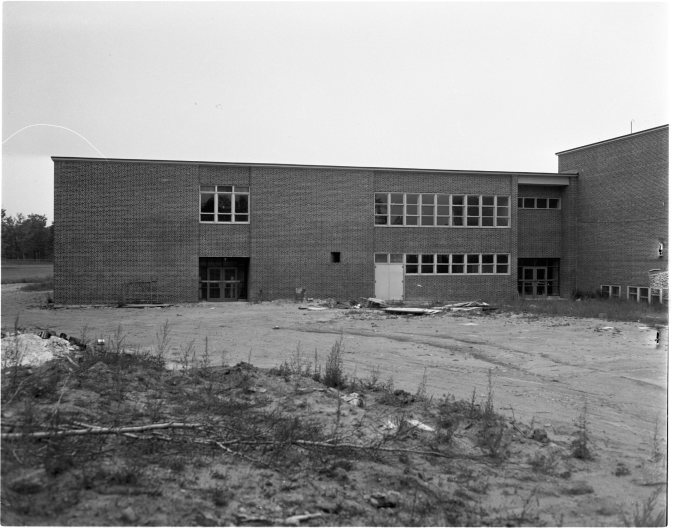 This new section of Midland-Penetang District High School relieved much of the crowding of last year when the new term opened Tuesday. The addition is at the rear, west portion of the school, and there’s another one on the east end. 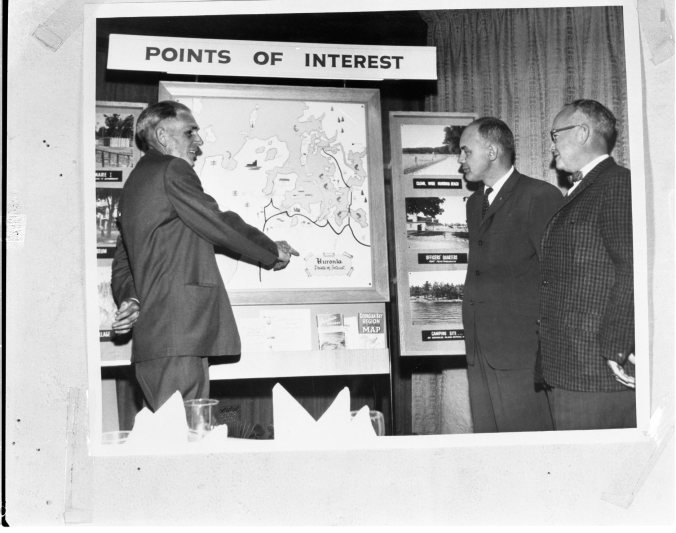 W. G. D’Aoust of Penetang, left, explains a new area tourist promotion scheme to Mayor Jerome Gignac of Penetang, centre, and William Orr, president of Midland Chamber of Commerce, at a recent meeting in Barrie, sponsored by the Brewers’ Warehousing Company Limited. In the scheme, an area map and pictures of historic sites and other points of interest are to be featured in displays in Brewers’ Warehouse stores, locally. —Photo by Favero. 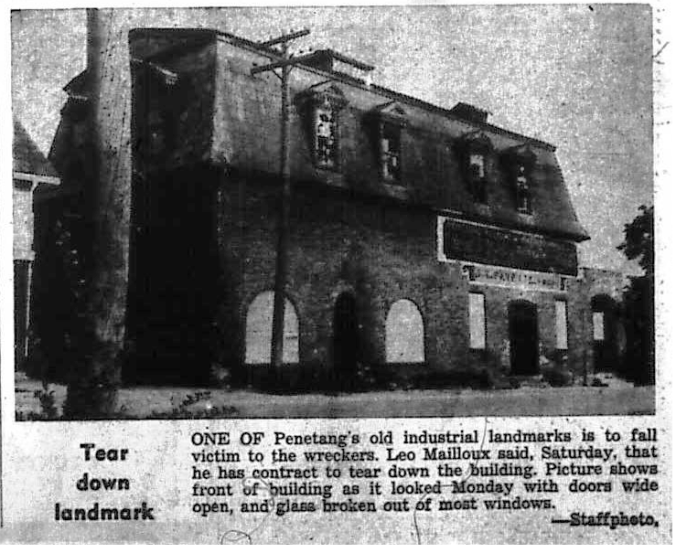 The Huron Roller Mill was built in the late 1800s by George Copeland Sr. The mill was located on the corner of Brock and Main Street, and had the very technologically advanced process of grinding wheat with rollers instead of traditional stones. The mill was able to produce four hundred barrels of flour a day! To find out more about the Huron Roller Mill and the history of Penetanguishene, visit the Penetanguishene Centennial Museum and Archives! (Courtesy PCMA) 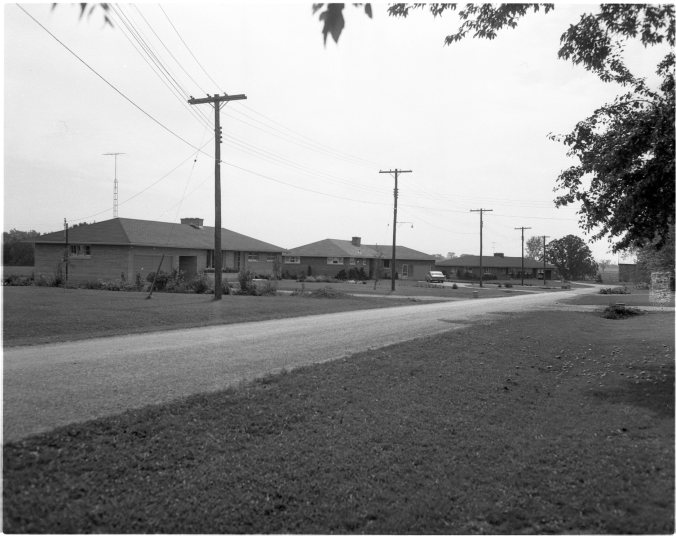 Many fine new homes have been built in Elmvale in recent months. These three are located in the southwest corner of the village, near the district high school. A number of others have been built recently in the northwest section. 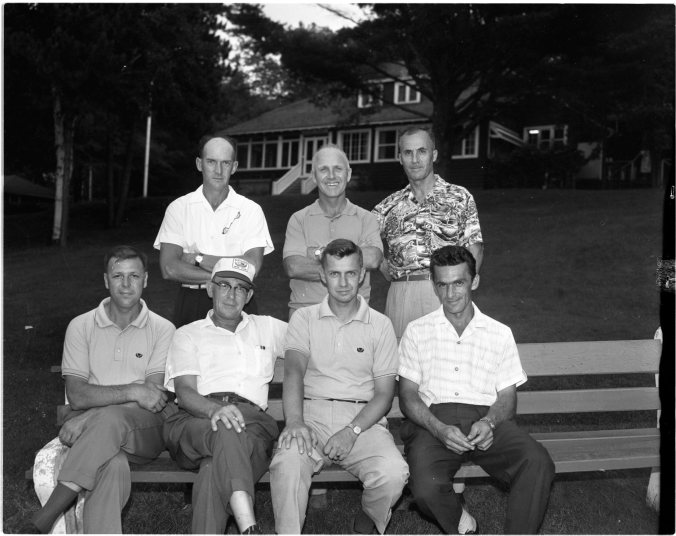 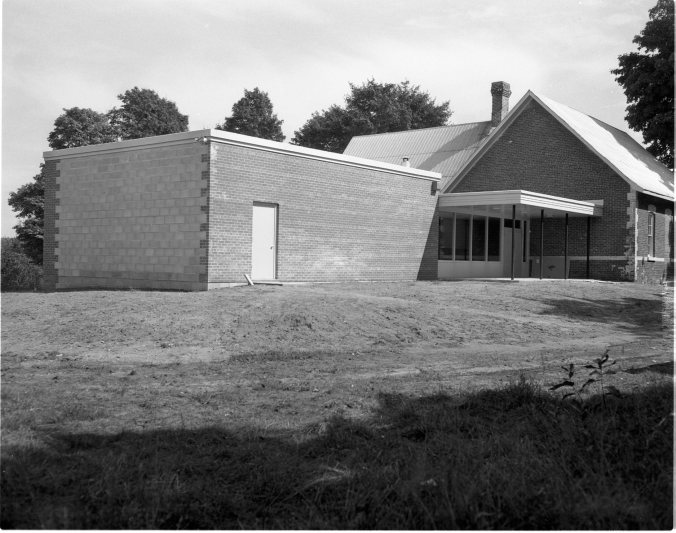 This new addition to Hillsdale Public School was put in use for the first time this week. It contains one large classroom and modern washroom facilities. W. G. Watkins, Elmvale, were the contractor and Carswell and Griesbach the architects. 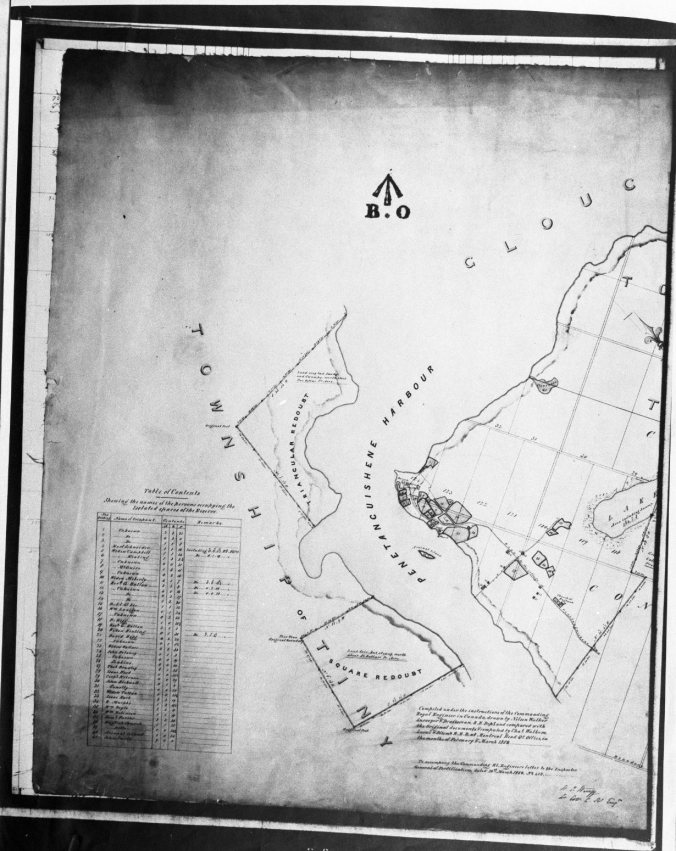 The British had big plans in store for Penetanguishene in the days when Americans were considered our enemies. Pictured above are the plans, compiled under the instructions of the commanding Royal-Engineer in Canada and drawn by surveyor Nelson Walker in February and March, 1852, to strengthen Fort Penetanguishene, indicated by the shaded areas on the point at right. The triangular and square redoubts, located on the opposite shore, were to provide additional strength. The threat from the U.S. ended and the plans were abandoned. —Photo submitted by Mrs. W. W. Jury.