Percherons, owned by Bert Lackie and son of Jarratt, rated as one of the best teams in the county, continued to win honours at Midland fair.

Midland fair set a record in attendance last week when more than 11,000 persons passed through the gates. A 27 per cent increase was noted in paid admissions.  This information was revealed yesterday by Jack Blackburn, secretary-treasurer of the Tiny and Tay Agricultural Society, sponsors of the fair. “There was a record turn-out for the fair and gate collections surpassed any other year that has been  recorded.” Mr. Blackburn stated.

Big hit during the evening show at Midland Fall Fair Saturday night was Yvonne Cruise, shown above getting her first prize money from master of ceremonies Bruce Armstrong. She won the step dancing competition.

They’re still “keeping them down on the farm” around Elmvale, judging by this fine-looking group of young people taking part in the 4-H Calf Club achievement day at Elmvale fair last week. “And that’s only half the club members”, pointed out Keith Clay, North Simcoe assistant agrep. Nearest the camera, at right is Doug Lambie, R.R. 1, Wyevale, champion dairy showman, and next to him is Don Beardsall, R.R. 3, Elmvale, the reserve champion. Calf clubs in North Simcoe boast an increase in membership this year and “the parents are also taking a great deal more interest,” said Mr. Clay. 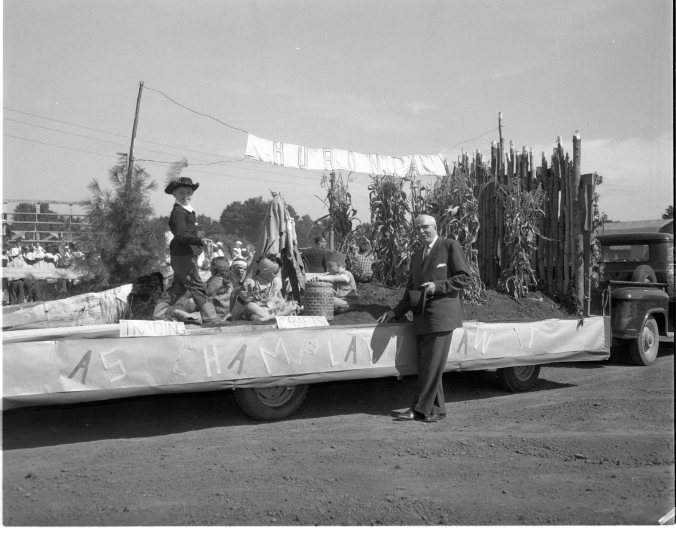 P. B. Rynard, M.P. for Simcoe East, is shown chatting to children on the Wyevale School float, entered in Elmvale fall fair parade last week. The float depicted Huronia “As Champlain saw it.” That’s “Samuel de” standing at left on the float.

Horses are always one of the big attractions at fall fairs. This group was exhibited at Midland. Sonja Beatty (center) won top honours in the lady riders’ event over Mrs. Ralph Adamson (left) and Mrs. Al MacMillan, who are sisters.

It’s “all hail the champs” this week at Midland-Penetang District High School. At Barrie Central Collegiate Saturday, the school won not one, but two, trophies for their prowess in track and field. For the boys, it was their 12th win in the 41-year history of the Tudhope Cup competition, plus a tie last year with Orillia DC and VI. Not to be outdone, the girls brought back home the Thompson Trophy, donated by the late H. J. Thompson of Midland and first competed for in 1947. It was the fourth time the girls had won the trophy, and the first since 1951.

Among the top point-getters for MPDHS in the Tudhope Cup track and field meet in Barrie Saturday were the lads above. Left to right are; Bill Binkley, Max Morden, Ron Moreau, John Dion, Randy Jones and Bob Weckman. 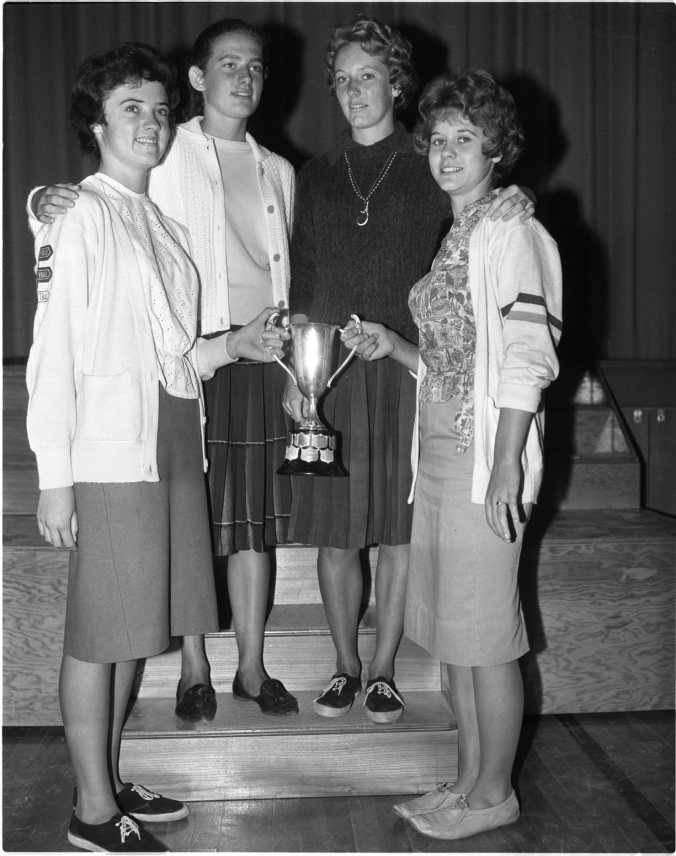 These four girls played big parts in MPDHS’ winning of the Thompson Trophy at the track and field meet in Barrie Saturday. Left to right are; Lynda Duggan, Joan Daniells, Joanne Kettle and Nancy Higgs.

Team captain Bill Binkley (left) and coach Perrie Rintoul hold the coveted Tudhope Cup, won by MPDHS this year for the first time since 1952 and the 12th time in the 41-year history of the event.

Brooklea Golf and Country Club held its annual field day recently and some of the main winners are seen above. Left to right are Les Scott, lone member to score a hole-in-one this year. Bill Howard, low net on field day, and Adam Staruck, with the club championship trophy. Art Ambeau, winner of low gross prize on field day was not present. 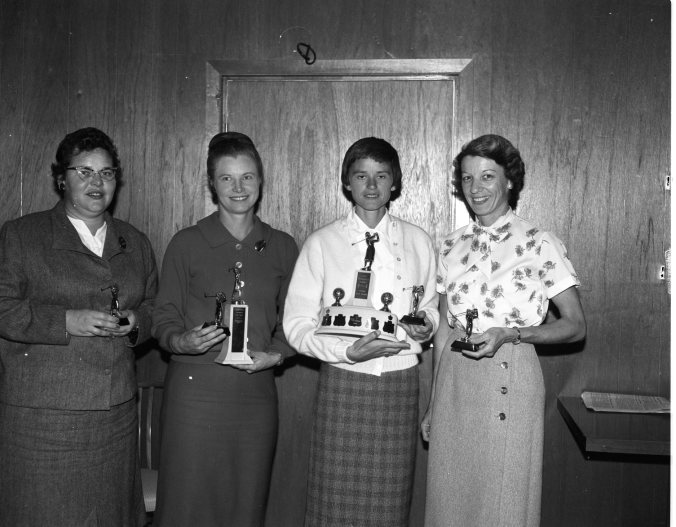 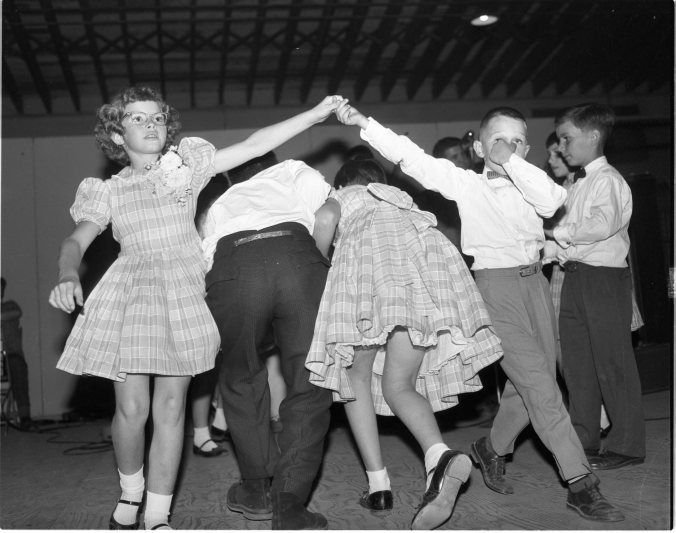 It was a lot of ‘Allemande lefts’- at Midland fair evening show last Saturday night as a number of square dancing combinations vied for cash prizes. Two tender-aged groups seen above are from Vasey and Waverley.

This huge tractor, on exhibit at Tiny and Tay fair, provided a fine perch for Debbie Knapp. She could see everything going on in the adjoining show ring. Debbie is the five-year-old daughter of Mr. and Mrs. Ed Knapp, Sunnyside.

Hydro helicopter is shown here as it took off Wednesday from the pole yard in Penetang with one of about twenty poles air-lifted to |Bone Island, north of Beausoleil. Poles were dropped into waiting holes, in an experimental project.

Really getting up in the world is John Cardwell of Midland’s Regent Public School, as he tries out ancient “Penny-Farthing” bike at Huronia Museum. Making sure Johnny doesn’t fall through one of the glass show cases are James Robinson, former Parkview School principal who has been lecturing at the museum this year, and schoolmate Charlie Dyer.

Look maw, we won! – It’s all ours say MPDHS lovelies Susanne Ball, (left) and Birgit Brinkmann, as they grasp the Thompson Trophy won by the MPDHS girls’ team at the big track and field meet in Barrie Saturday. It was the first Thompson Trophy win for the girls since 1951.

“Are you ready men?”, asks Rev. Len Self as he sets up a face-off in the new Knox pee-wee lacrosse league, which plays triple-headers at Knox Church each Thursday.

Doug Duncan, 13, of Port McNicoll has an odd playmate in this five-month-old alligator named “Alex”. Lest the residents start fearing for their safety, “Alex” is less than a foot long (as yet) and spends most of his time inside a glass water tank. Doug is the son of Mr. and Mrs. Bruce Duncan, who operate a marina at Port.

2 thoughts on “Huronia Museum – Looking Back 60 Years in North Simcoe – A pictorial review of the last two weeks of September and the first two of October, 1961.”