”Like a bolt out of the blue,” was the way one Penetang councillor termed Mayor Jerome Gignac’s request at this week’s council meeting asking members to sign an affidavit concerning their employment. The mayor proposed to keep the affidavits in his personal file. His request came after a letter had been read from the Department of Municipal Affairs dealing with conflict of interest on the part of elected members. Mr. Gignac asked councillors whether they would be in favour of signing affidavits setting out their terms of employment. “For instance, I don’t know whether Reeve Cage is a partner in Penetang Motors, or an employee,” said the mayor. “And should any question arise concerning conflict of interest of a member of council, I would be able to answer it,” he said. Four members of council when contacted by this paper were pretty well in agreement that the mayor’s request was unnecessary in view of the oath taken when members were sworn in.

Although it appears no one in town is interested in the job of dog catcher, Penetang council is preparing to pass a bylaw which would require dogs to be tied up throughout the entire year. Applications for the job were to be in the hands of council by February 12th, clerk A. Doucette reported no one had applied.

Officials of Grew Boats, Penetang, this week expressed satisfaction with the response to their new line of boats shown at the recent Boat Show in Toronto. “Manufacturers in general seemed to be pleased at the public’s reaction in a return to wooden boats,” Bob Munro said. “The big move today, is quite definitely a return to wood for boat building .” Speaking of their new line of boats now being manufactured, Grew representatives who attended the show felt the public is definitely interested in the appearance of these craft. While the company did not take orders from the public for these boats, Mr. Munro said appointed distributors were quite successful in selling the craft. “We confined ourselves to lining up a group of distributors who will handle the retail end of the business.” Good progress is being made in the local plant in setting up the new production line for manufacturing the lapstake boats which are expected to become the major part of the plant’s output. Company officials say wrinkles are being ironed out and one completed craft has already come off the line. Several key employees of Grew Boats are in the U.S. at the present time viewing techniques employed in the plant of the originators of this type of construction. One of the main features of the craft is that while they are of lapstrake construction, the material used is plywood. This entirely eliminates all vertical butt joints in the planking and adds to faster construction. 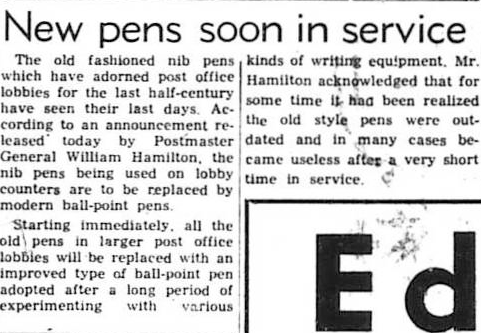 Most encouraging news in this area to date was the announcement last week of the location in Midland of a new industry which will employ 70 male workers. This newspaper welcomes Kindred Industries Limited, a subsidiary of Kitchen Installations Limited of Ajax. That the negotiations with the company, conducted since last March, arrived at a satisfactory conclusion for all parties, is due in no small way to Chairman Frank Bray and members of his chamber of commerce industrial committee. This latest member of the Midland industrial family is nursed by the chamber officials all the way.

Dark-haired, blue-eyed Bonnie Rourke was chosen “Queen of Hearts” at MPDHS for 1962 at Midland’s Roxy Theatre last night. A grade 12 student with plans for a teaching career, Bonnie is the daughter of Mr. & Mrs. Frank Rourke, Sunnyside.

Charles McIlravey Jr., son of Mr. & Mrs. Charles McIlravey, Hugel Ave. who sails on the SS Ivernia for England where he will be working for Loblaws. Aged 18, Mr. McIlravey attended Regent Public School and Midland-Penetang District High School. He worked at the store in Midland for two years and is one of a number of young men recruited by the company for British service.

An enthusiastic response greeted the call to take the first of two, six week National Survival Courses to be held the Midland Armory Feb. 26 to April 6. The second class is slated to start Apr 1 16. To date 133 have registered, 33 more than the 100 maximum set by the Department of National Defence, sponsors of the training program. A former World War II veteran, Major Les Taylor of Midland, has been named local administration officer by the Central Ontario Area Army Command. About 40-men were put through their medical examinations and given aptitude tests. Major A. Searel, personnel selection officer for the Army, praised highly the calibre of recruits and said that only three had been rejected of those tested so far. 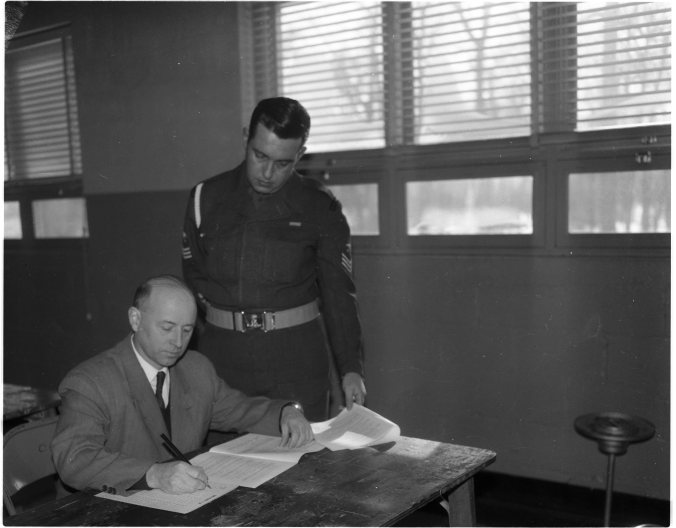 Starting out on the first phase of the six week national survival training course at the armory is Cyril Large of Midland as he begins his Select A aptitude test, while Sgt. Bruce Fleming, Toronto, Army training instructor looks on. Over 130 men have registered for the first of two courses to be held in Midland. 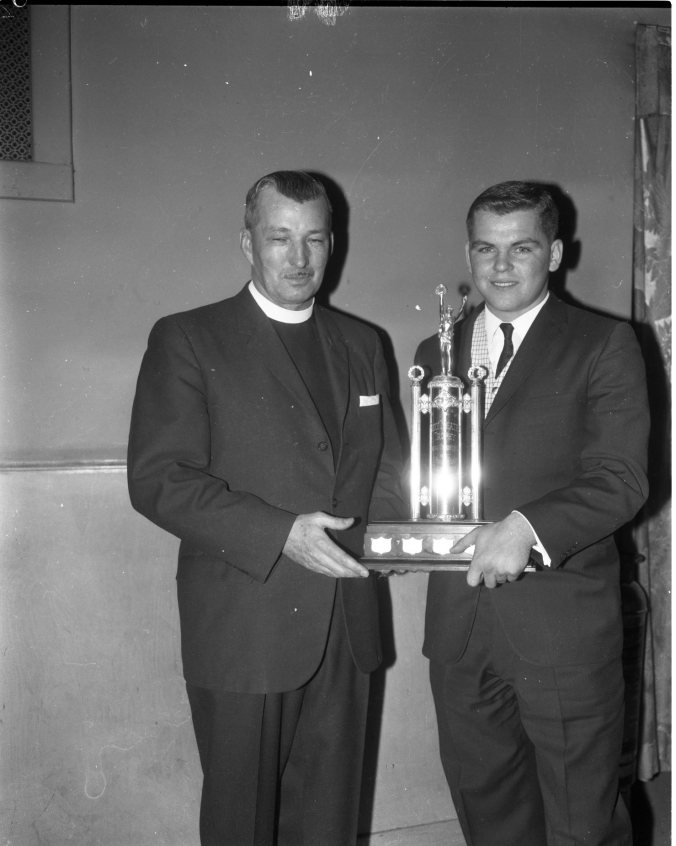 Top athlete. Named senior football player of the year at Midland-Penetang District High School, Bill Binkley is seen receiving his trophy during the “Queen of Hearts” finals at the Roxy Theatre last week. Rev. Len Self made the presentation.

Near zero temperatures the weekend didn’t stop these boys from getting in their regular practice sessions for the Ontario Ski Jumping Championships in Midland Sunday. Left to right are Unto Virolainan, instructor Pete Pettersen, Marjan Senk, Frank Arko, Ray Kaija, Gernot Dick and (in front) 11-year-old Mark Kaija who will open the jump with former Midland favorite Hans Eder. Mark’s dad, Ray Kaija, will rate as one of the favorites after winning the Southern Ontario title in Owen Sound recently.

These five “lovelies” from MPDHS competed in the finals of this year’s Queen of Hearts contest at the Roxy Theatre last Thursday. Seated are Pat Bate and Bonnie Rourke (right) crowned “Queen” for 1962. Standing left to right are Margaret Spicer, Sharon Dubeau and Betty Trace.

[We have been corrected by Viktor Kaczkowski, a member of the website group, Midland Ontario Canada – Our Hometown -Then and Now. The above photo was taken at the Tiffin Elevator in Midland as Victor has noted, not Port McNicoll as we stated. We will leave it posted because we love our marine heritage and photos of it and will add a photo of the actual Port McNicoll winter fleet below.]

Members of Midland council were thwarted in their efforts to have a motion of censure against Mayor Charles Parker read into the records at Monday night’s council meeting. The motion was made by Reeve Arthur Argue and Alderman William Thompson. The mayor refused to accept the motion criticizing him for charges he made against council members at a meeting February 12. He had accused members of holding secret meetings and conniving behind his back.

A 10-man OPP anti-gambling squad last night closed a bingo game in Parkside Pavillion, Yonge Street, West, Midland. About 120 person were in the hall when 10 members of the OPP force entered, headed by Staff Sgt. J. M. Anderson. The players were allowed to leave. Staff Sgt. Anderson told this newspaper he was conferring today with the Crown Attorney in Barrie concerning possible charges to be laid in connection with the raid. The bingo was operated for the Minor Hockey Association and games were held every Tuesday night in Parkside, Staff Sgt. Anderson stated.

Although the weatherman co-operated in providing beautiful sunny weather in North Simcoe for Penetang’s annual Winterama, he was somewhat less co-operative in dumping large quantities of snow on Toronto and other southerly areas. In the opinion of Winterama officials, this quirk of fate was responsible for considerably reducing the crowd which usually attends.

Pete Pettersen’s luck, which has often soured on him in the past at big ski meets, certainly was favoured by the gods on Sunday. Near-perfect weather and a crowd of around 2,500 witnessed the Ontario ski-jumping championship held on Pete’s hill, first big meet here since 1957. Just one day later and competitors and fans would have been greeted with a heavy rainstorm that undoubtedly would have washed out the meet completely.

Veteran of North Simcoe’s barbering business is Dick Lethbridge. Dick, since 1937 or so, has been barbering at Balm Beach with occasional fill-in visits to Midland shops to help out friends who are off through illness or on vacation. His summer time work at the beach calls for a very long day, Dick says, but not nearly such a long one as used to prevail in Midland tonsorial palaces on Saturdays. From 8 a.m. till early Sunday morning was the rule. Nearly all the customers were in for a pre-Sunday shave and the man who merely wanted a hair cut got a dirty look from other customers. Now even the barbers themselves use electric razors. Dick had ambitions to be a railroader but in the early years of this century a man with glasses was barred, from operating jobs.

The expansion of telephone facilities in Midland during 1961 was typical of the situation across the territory served by the Bell Telephone Company of Canada. On the local scene, some 150 telephones were added, H. A. Kilroy, Bell manager for this region, said, bringing the total to 4,000 as of Dec. 31.

Busy in her kitchen is Mrs. H. E. Miller, 285 Fourth Street, who won a fourth prize in the cook-book recipe contest. “Refrigerator Pineapple Cheese Cake” was the tasty bit that won her the award.