Senseless vandalism seems the only way to describe this scene, taken in D. MacNabb’s garden at 157 Fifth Street, Midland. Numerous tomato plants and many hours of work were ruined by the invaders, who also uprooted cabbage and flower plants. Marks on the ground indicated the vandalism was the work of adults.

These two men, Kenneth Price, left, and Kelvin Ward, are in charge of the paving program now underway at Port McNicoll. Mr. Price of Toronto is an engineer for 0. A. Meadows and Associates Ltd., while Mr. Ward, from Barrie, is foreman for the Disher-Farrand Co. Portions of three village streets are getting new paved surfaces.

It’s quite a mess right now, but Port McNicoll’s Fourth Ave will be a much-improved thoroughfare in a few weeks when badly-needed new paving is installed. Seventh Ave. and Third Street will also be paved in a program which also includes ditching, curbing and the laying of some sidewalks.

Deep in delphiniums is Arthur Rollinson, whose Pacific Hybrids add color to the many gardens blooming in Waubaushene these days. Mr. Rollinson is secretary of the community’s bustling Chamber of Commerce. 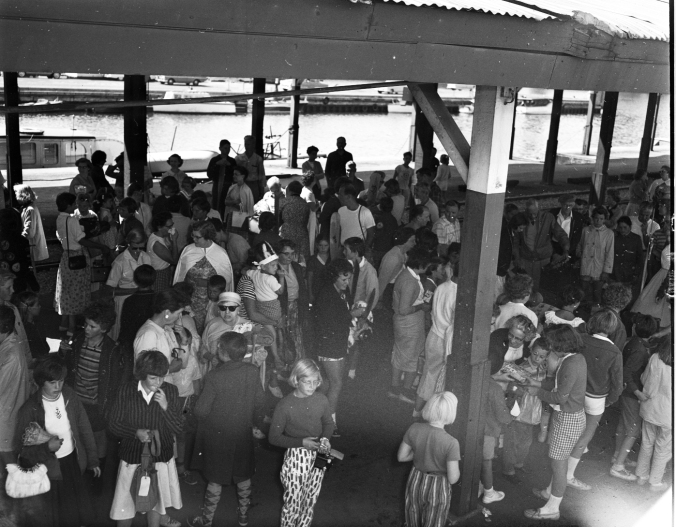 A good time was had by all apparently, according to the girls returning from Camp Kitchikewana on the S.S. Dover August 27. Despite mediocre weather for the past two weeks, the young campers sported good coats of tan to show their waiting parents. The event also marked the end of camp “Kitchi” for another season. 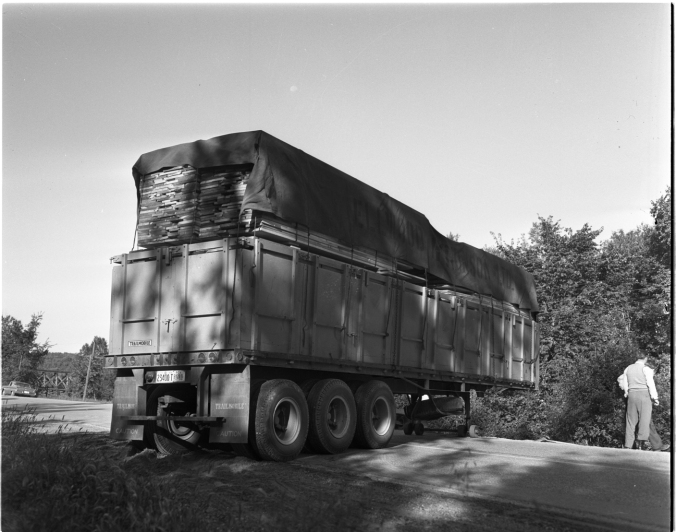 Load of lumber bound for Penetang Tuesday, Sept 2, was too high to go through the CPR subway about five miles east of Midland. When driver Bert Bridges tried to turn around and find an alternate route, his vehicle became stuck while straddling Highway 12.

Making sure of the ground rules before Monday’s OBA playoff game in Midland are Indians’ Murray Yorke, umpires A. MacLean and R. Horne, and Bowmanville manager Fred Cowle. Indians won 2-0. The second game of the best-of-three intermediate A playdowns is slated for Bowmanville Saturday. 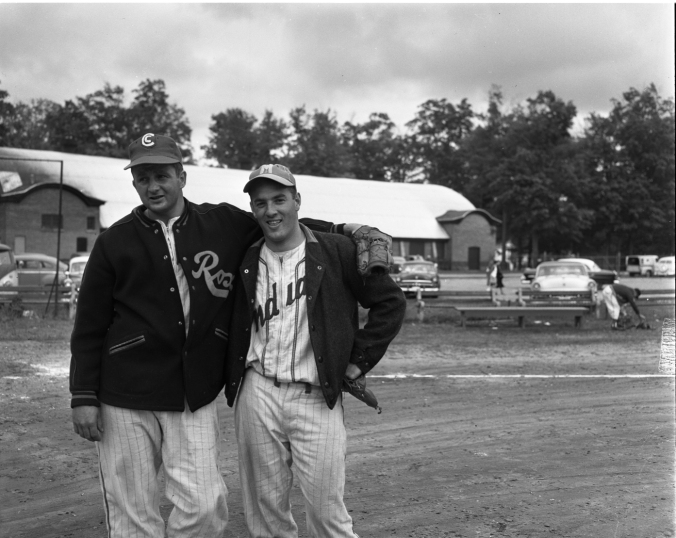 Heroes in Midland Indians’ 2.0 win over Bowmanville Harvesters Monday were Gord Dyment, left, and Larry Greene. Dyment allowed only one hit and fanned 18 batters. Green produced the needed runs with a homer with one mate aboard in the third inning. 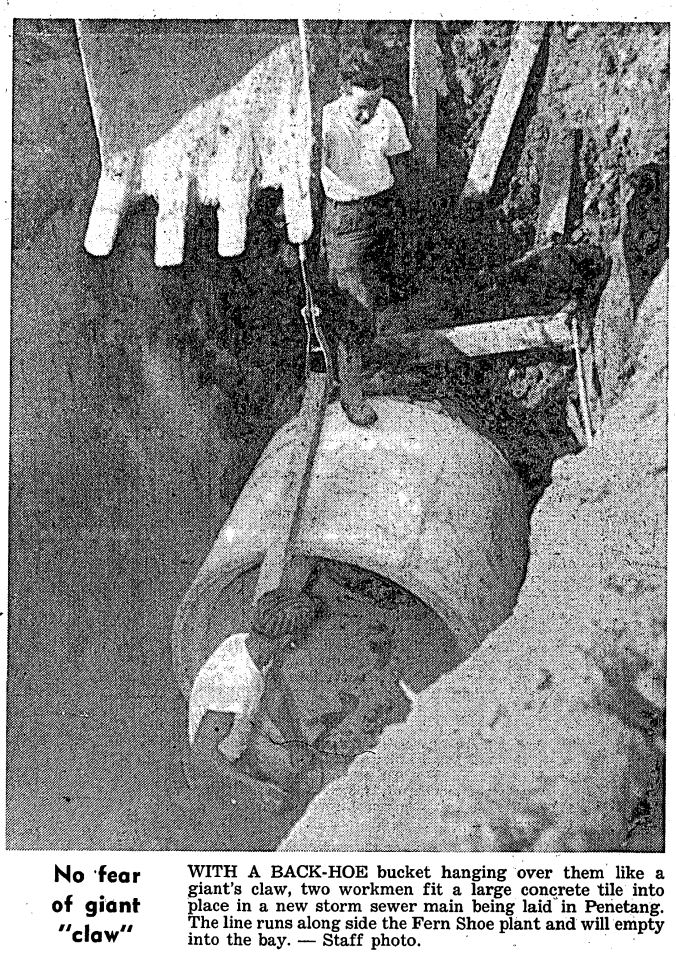 The new overflow storm sewer being constructed from Penetang’s Main Street to the bay, alongside Fern Shoe plant, approached completion this week when the contractor finished laying four-foot tile to the street line. Work started Tuesday morning to tear up the pavement for the huge excavation which will be necessary to join, the new line to the existing trunk sewer. The plan calls for the new line to enter the main hole at a lower, level than the sanitary sewer. The top portion of the existing sewer will be cut away, allowing it to overflow during flood conditions with water being carried away in the overflow sewer. 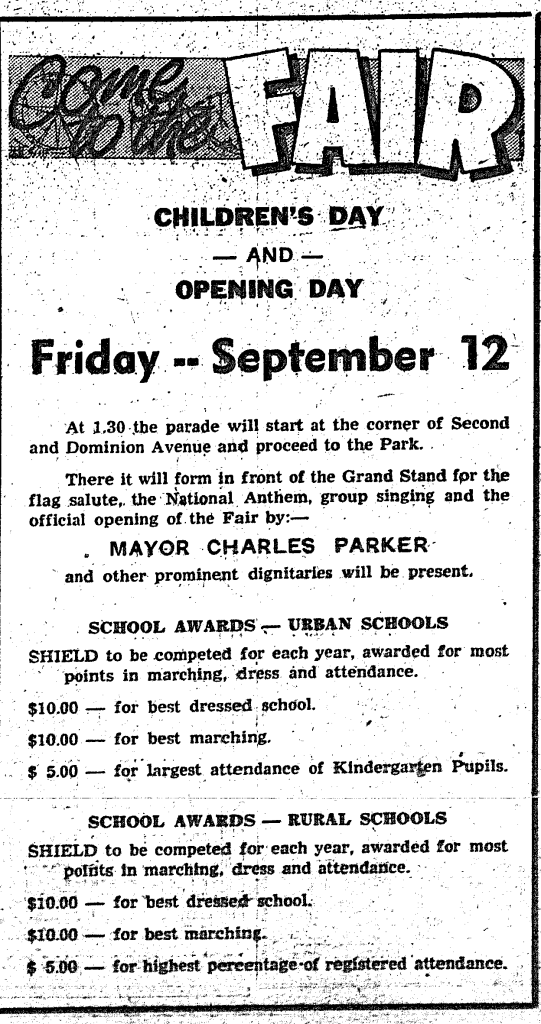 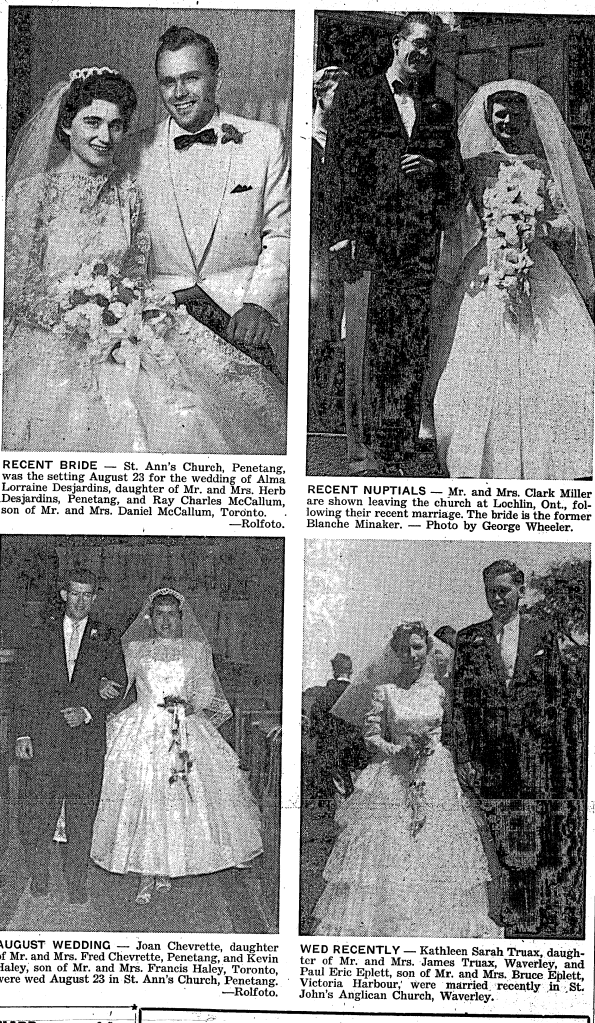 Hon. Ray Connell, at left, found time for a joke Wednesday when, as Minister of Reform Institutions, he visited his department’s conservation farm at Hillsdale. With him is W. H. Cranston of Midland, center, an early backer of the project; and Lloyd Letherby of Coldwater, MPP for Simcoe East. 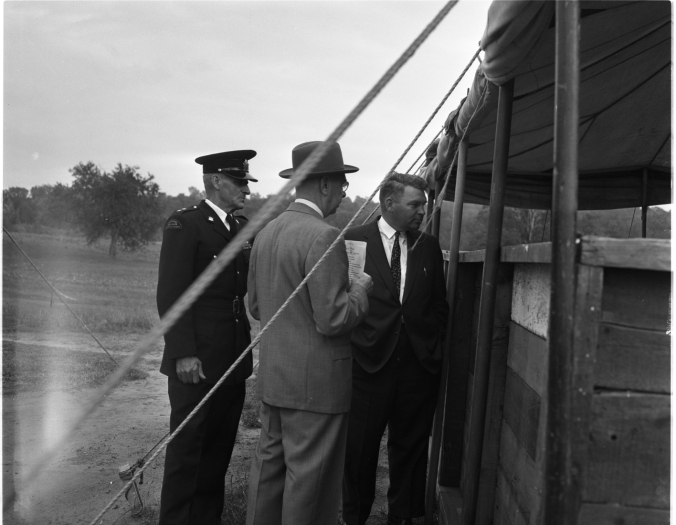 Sleeping tents used by inmates of the Reform Institutions conservation farm near Hillsdale were inspected yesterday by department officials. Left to right are Lieut. C. Clarke, officer commanding the camp; E. Griffin, superintendent of Mimico Reformatory, where men are chosen for the North Simcoe project; and Hon. Ray Connell, minister of Reform Institutions.

The 36 men of the conservation farm of the Ontario Department of Reform Institutions near Hillsdale have completed 21- projects so far this season. Lieut. C. Clarke said Wednesday almost all the projects were in the townships of Tiny, Tay, Flos and Medonte and were completed since the camp opened this season on May 22. The men are all short-term prisoners who have committed such offenses as petty theft and minor liquor infractions. They are carefully screened before being transferred to this district from Mimico Reformatory. Projects completed are as follows: Medonte— Planting 4,000 Austrian Pine. Medonte—Cleaning and brushing conservation lot. Cutting fence posts for Mimico Reformatory. Medonte — Hillsdale Community Park; brushing and cleaning, building pavilion and tables. Cutting fence posts for the Ontario Hospital, New Toronto. Midland Kiwanis — Planting 15,000 Austrian Pine. Medonte— Vasey Park; brushing, cleaning, and picnic tables made. Tay — Waverley Park; brushing and cleaning, children’s swings erected. Tay — Excavation at Iroquois village on Forget site. Flos—Brushing and cleaning on 9th Concession. Cutting and loading 1,000 cedar poles for Burwash Industrial Farm. Erecting new buildings on the campsite. Flos — Picnic tables made. Flos-Medonte tables made. Park — Picnic Medonte — Thinning out timber on reforestation lot at Coldwater. Tay — Brushing and fencing at McKenzie Park, Victoria Harbour. Medonte — Brushing between rows of pine on Reforestation lot. Tay — Brushing and cleaning at Waubaushene. Tay — Brushing and cleaning at Scott’s Line. Tay — Midland Park; new extension; brushing and clearing timber. Midland Kiwanis — Picnic tables made for Crippled Children’s camp.

In addition to the 21 projects already completed by the conservation farm workforce in North Simcoe this summer, officials hope nine more will have been finished when camp closes for the season late this fall.