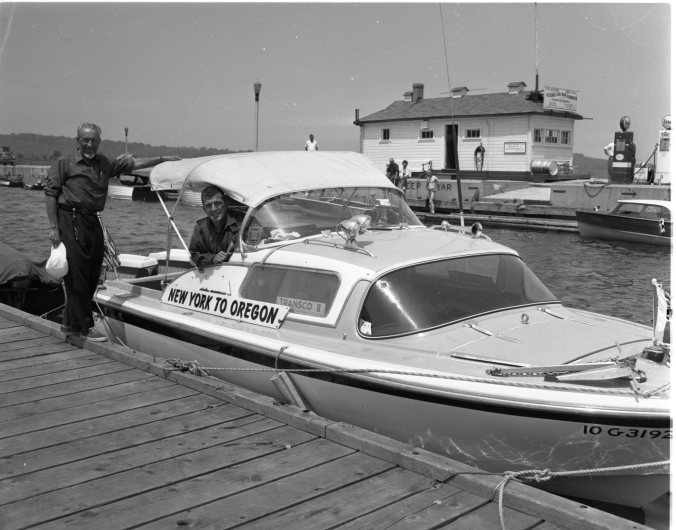 Midland became an international port over the weekend, even though the “ships” were a bit on the small side. Actually, the two vessels involved were outsized outboard cruisers that would delight the hearts of many a local boating enthusiast. First to arrive, at noon Saturday, was the Transco II, en route from New York to Oregon. Docking Monday afternoon was the “Coronet Explorer”, en route Montreal to Chicago on this occasion. Last year the Coronet gained worldwide publicity by becoming the first outboard-powered cruiser to cross the Atlantic. Built in Denmark, it made the crossing from Copenhagen to New York in 10 days, 17 hours, according to Jack LaFrendre of Lake Forest, Ill, in charge of it now. 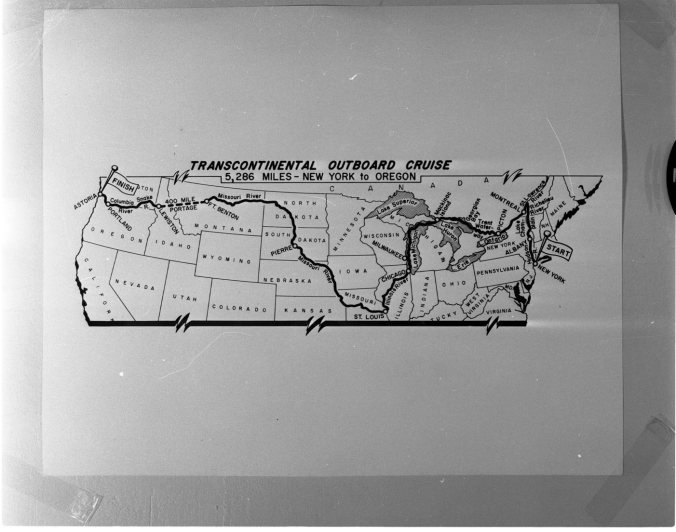 Route of the Transcona II on its 5,280 mile trip from New York to Oregon is seen on the above map. The only detour is 400-mile stretch over the Continental Divide in Montana and Idaho.

Three Collingwood sailors, including Capt. Percy Butters, 64, lost their lives when the tug Bayport sank off Collingwood harbour Monday. Other victims were Ed McCoy, 49, a crewman, and engineer Ken Mclnnis 41. During winter months the Bayport was a familiar sight in Midland harbour, where she was used as an ice-breaker. (Happier days in this photo from September 1954.) Bayport returns from boiler work in Collingwood, on board are two captains and two first engineers. Capt. J. W. Scarrow of the Hochelaga, and Capt. C. S. Ward of the Goderich. J. G. Hendrickson general agent for CSL Midland and P. J. Rutherford, chief engineer of the Goderich.  Bayport was moored at the end of the (Sea Cadet shed) custom shed dock, near the Townhouse elevator.

Hanging flower baskets on light standards along King Street has been an annual job for Midland’s Jaycees for a number of years. With the visit of Queen Elizabeth coming up July 4, the baskets (72 of them) are larger and better than ever this year. Helping with the job are, left to right, Jaycees George McLaughlin, Don Swinson, Doug White and Bill Mitchell. [Mac Perrin’s greenhouse behind the flower shop where the parking lot is now. The two flat-roofed houses in the background, built by Mac, are still there on Midland Ave.]

Midland has begun its preparations for the royal visit July 4. Workmen above are attaching “ER” shields to light standards along King Street. Town employee on right is Jim Stewart. 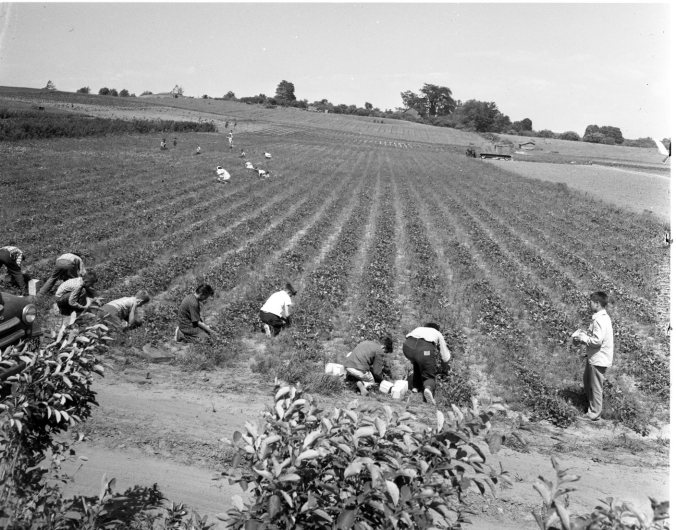 Familiar scene around the Midland-Penetang area these days are strawberry-picking groups like the one above, adjacent to Highway 27. A good rain is badly needed, however, to assure more than an average crop this year. Grain crops are also reported to be suffering from lack of moisture in the past three weeks. [Sandy Rankin had a patch at the south end of King Street and would pay us 5 cents a box to pick for him.] 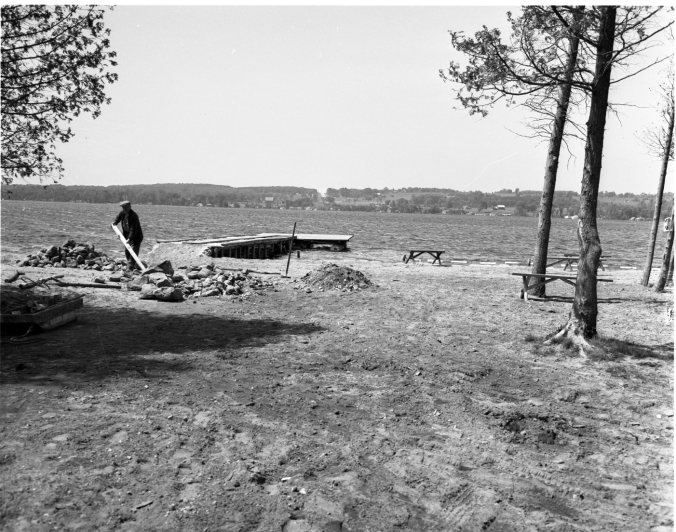 Fast becoming one of the most popular picnic spots in North Simcoe, the Flos-Medonte Park at Orr Lake has been all spruced up for another season. Caretaker of the park, Joe Lea is seen above starting work on a new stone fireplace. A number of churches in the area have already “booked-in” for picnics in June.

Huronia Museum in Midland has opened for another season and one of the features this year is a display of paintings by Simcoe County artists. Some of the pictures, collected by the county arts and crafts association, are seen above with Mrs. D. H. Wray of the museum staff. John Desrochers of Penetang completed the one of Magazine Island (top centre). Other artists represented in the pictures above include Katherine Day, Orillia and J. L. Vleming, Port McNicoll. 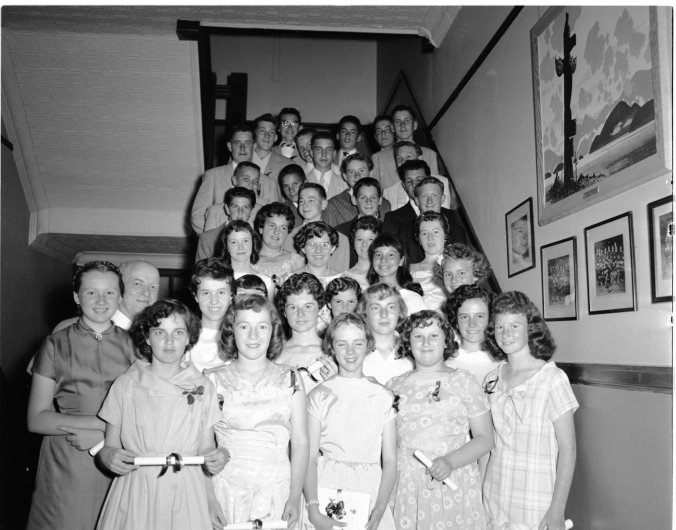 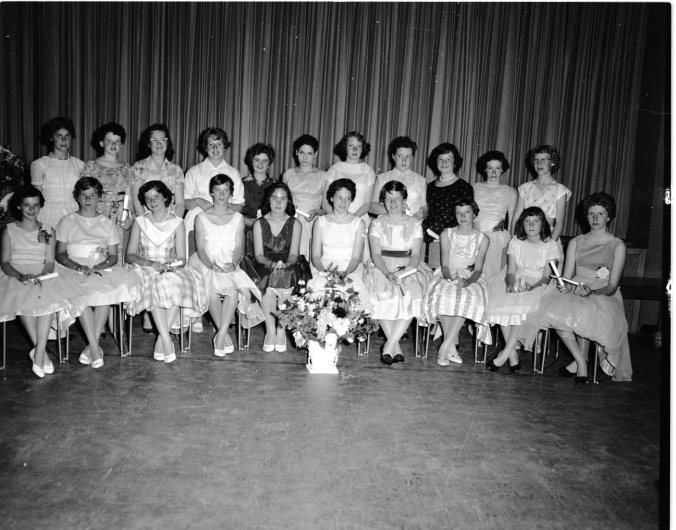 Just in time for the Queen’s visit July 4, the dock area at Midland harbour is getting a new hardtop. The contractor is Jim Anderson, Midland. Improved surface for the dock has long been sought by local authorities. 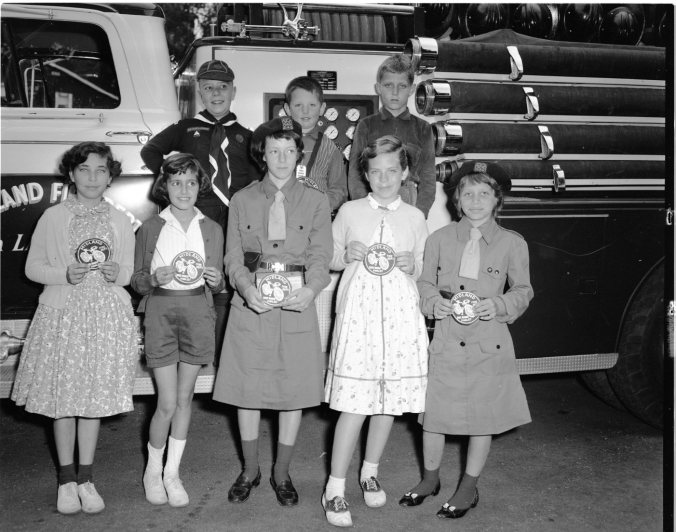 Midland firemen have successfully concluded another bicycle road-e-o in which public school pupils try written tests and later give an actual demonstration of their ability to handle their bikes on the road. Some of the winners include, left to right, front row — Mary Jane Mohan, Wendy Walton, Peggy Krochko (holding the lamp kit she won for placing third in the contest), Eleanor Boden, Connie Stelter; back row—Ronald Jessome, Danny Donaldson and Blair Shakell. Missing were Katherine Brandon, John Cranston, David Gosselin and Tom Atkinson.

July 4 will be a long remembered day for 8-year-old Mary Lou Gignac of Penetang, chosen to present flowers to Queen Elizabeth on the occasion of her visit to that town. Seen with her mother, helping to fit her brand new dress, Mary Lou is the daughter of Mayor Jerome and Mrs. Gignac. 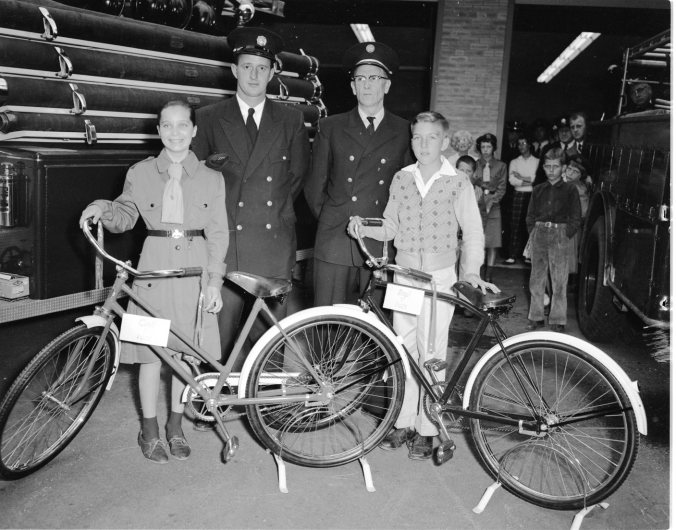 Brand new bikes were the rewards for Maureen Mohan and Ralph Battrick, who knew their rules of the road, and how to apply them in practice. With fireman Dave Hudson, left, and Chief Arnold Tippin, Maureen scored 780 and Ralph 786 out of a possible 824 marks in the bicycle road-e-o sponsored by Midland Fire Department June 20. One of the bikes was the joint donation of Gordon Moss and W. H. Cranston and the other of the fire department. 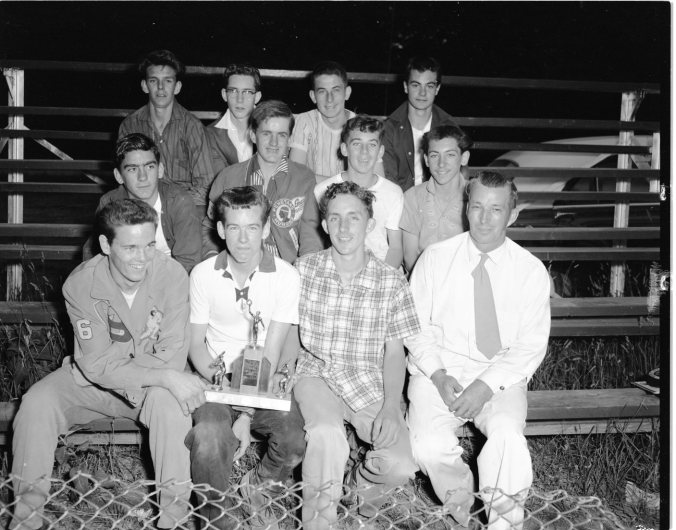 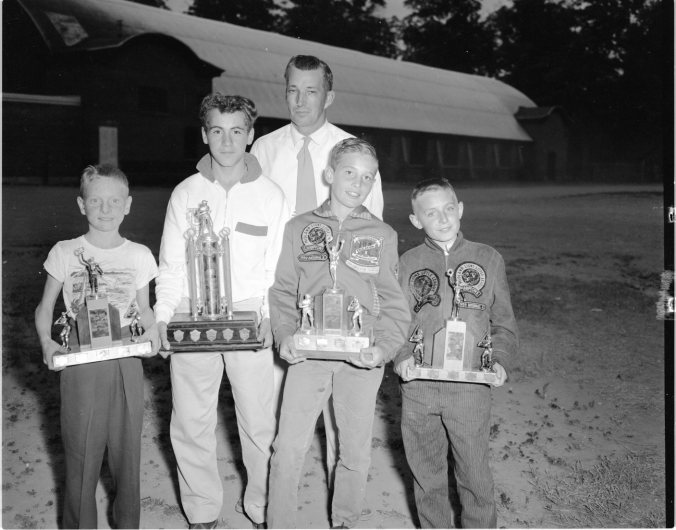 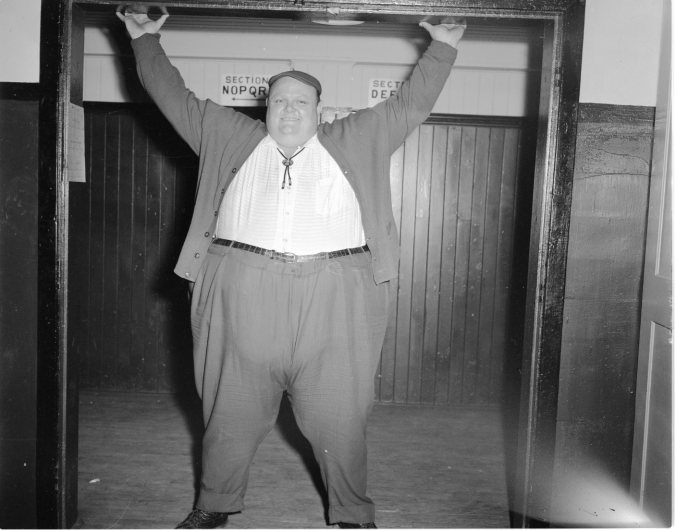 When Farmer Humphrey climbs into the wrestling ring, it generally means a tough night for the ring, as well as his opponents. “Humph”, all 600 lbs. of him, hails from Georgia. He won a decision over Karl Kulaski at Midland Arena Monday night when Karl, who made sure his playmate didn’t fall on him, was disqualified.

UGH!—”Hey, cut that out,” says Whipper Billy Watson, right, as Hard-Boiled Haggarty sinks a mighty right into the Whip’s tummy at the wrestling matches in Midland Arena Monday night. 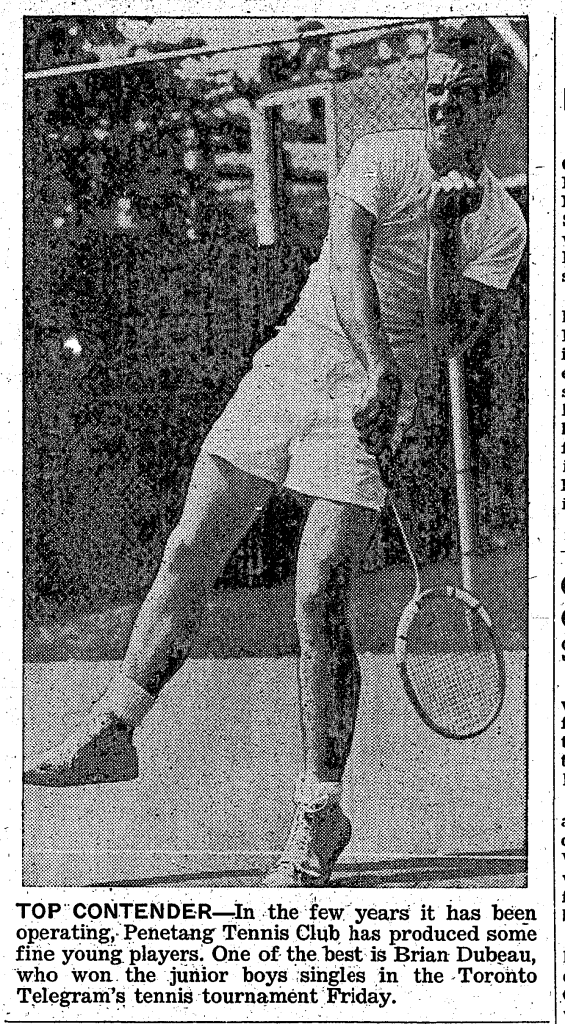 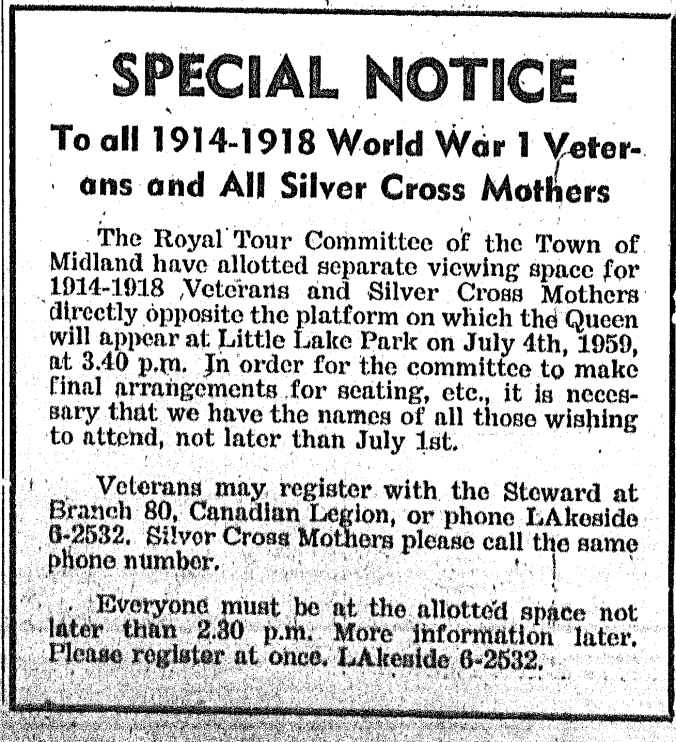 Taking that glimpse further back we are invited by the CPR to enjoy a cruise on one of their “gleaming white ships” on the inland seas. This page is from the Midland Advertiser paper, April 1940.

Leave a Reply to Ritchie With Cancel reply