Free Press Herald headline of Wednesday June 28, 1961.
New, two-pronged push to expand industrial employment in this part of Ontario is being undertaken by the Georgian Bay Development Association with the assistance of added financial support from the  Ontario Department of Commerce and Development. Starting next month the development association is undertaking a community by community survey of both currently used and idle potential industrial capacity in each local industry. This survey, it Is hoped, will not only assist in developing new product lines in concert with foreign companies seeking Canadian markets, but also in making known to existing manufacturers what services can be rendered to them by other firms located within the Georgian Bay area.

Despite intermittent showers which drove the more than 500 spectators indoors for most of the ceremonies, the solemn blessing of Midland Separate School Board’s new Sacred Heart School went off smoothly Thursday evening. All of the visitors, including church dignitaries and civic officials, said they were “highly pleased” with the new school at Elizabeth and Lindsay Streets, built at a cost of $270,000. “It sure is different to the one we attended” was the most frequently-heard comment during the tour of the school which followed the ceremonies. Official blessing of the building was by His Grace, Most Rev. Phillip F. Pocock, D.D. coadjutor archbishop of Toronto. Honor of laying the cornerstone went to Monsignor J. M. Castex of Penetang, often called the “father of separate schools in Midland”. He had helped start the first Sacred Heart School in Midland in 1928. “This beautiful building is the result of many years of planning and many hours of hard work,” said Lloyd LaPlume, chairman of the board. “It is the combined efforts of parishioners, architects, engineers, contractors, town officials and inspector. 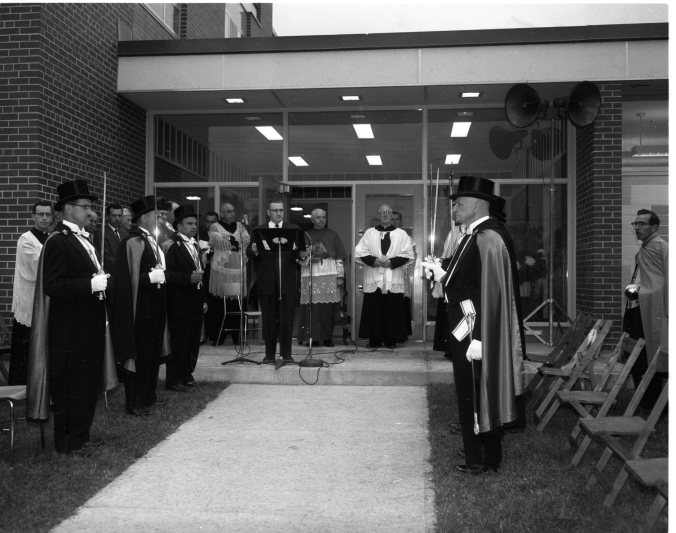 Robert Brodeur, eight-year-old son of Mr. and Mrs. Kenneth Brodeur, Colborne Street, Midland, suffered a broken left ankle when the bicycle he was riding was in collision with a car driven by Arthur Desjardine, 71, of Penetang, Monday evening. Const. John Evans, who investigated the accident at Queen and Elizabeth Streets at 6.55 p.m., said the boy was riding north on Queen Street when the accident happened. No charges have been laid, Chief George Wainman advised yesterday.

Sunday afternoon, June 11, St. Mary’s School opened its doors to a new kind of class. The pupil themselves were not new, nor was the room they occupied. Students of Sister Mary Imelda  during 1933 to 1941, when she taught Grades 7 and 8 classes returned to honor her in the same class-room that they had spent the last days of their elementary school training. Master of ceremonies for the event was John Gianetto. He welcomed Sister Imelda, members of the clergy and former classmates. Speaking on behalf of classmates, he thanked Sister Imelda for the firm and dedicated way she had moulded so many of today’s citizens. He hoped she would be able to do so for a good many years, so the pupils of today could reap the benefit of her work. Bernard Leclaire, representing the class of 1933, presented Sister Imelda with a desk clock and pen set in white marble, engraved for the occasion. Representing the class of 1941, Mrs. Tom Gilbert (nee May Fitzgerald) presented her with two dozen American beauty roses. 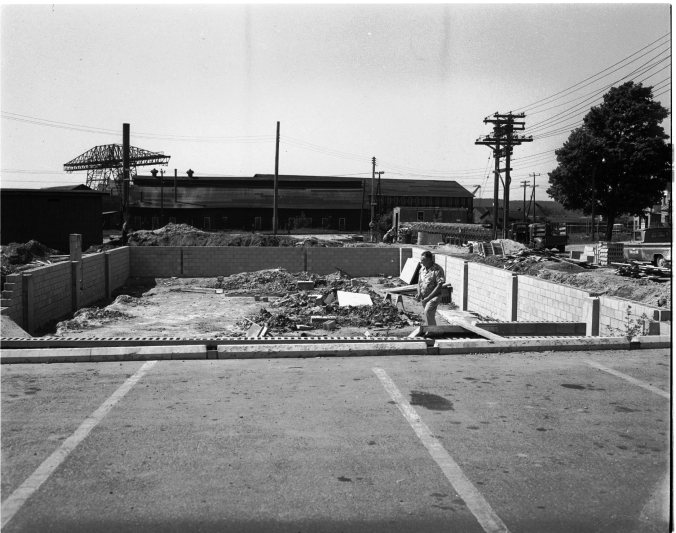 Good progress is being made on the new hall for Branch 80, Royal Canadian Legion, on Queen Street, Midland. Alf Rei, general contractor, is seen in the foreground examining some of the work on the $77,000 building.

Winners of the final Polaroid camera contest, sponsored by this newspaper and district merchants were determined Thursday. Flanked by Gerry Gieseke, left, and Arnulf Beutler, right, co-winners of one of the cameras, is Carol Anne Wagg, 127 Scott Street, Midland, the other winner. Carol obtained her entry form at Holder’s Bakery.

County Herald headline of Friday, June 30, 1961.
S. A. Hamilton of the Department of Lands and Forests, stationed at Maple, expressed some surprise when told by this newspaper Wednesday that a worm which he identified as “pine saw fly” had appeared in Tiny Township. “We had expected some of the outbreak there in year or two, but not this year,”  he said. Mr. Hamilton said the parasite is advancing east from Huron County at the rate of approximately 20 miles a year. “It is establishing itself on a line drawn roughly between Collingwood and Toronto,” he said. “It is possible a small pocket has established in Tiny, but the township should miss the worst part of the infestation.” He said the parasite is disastrous to Scots pine for Christmas tree use. The worms eat all old needles on a tree, passing up only the new growth. “They are very easy to kill with a DDT spray.” he said. “For this year, the trouble should be practically over since they are very nearly through their growth stage when they do all the eating.”

Because his safety helmet saved him from possible death, Garnet Brown of R.R. 1, Vasey, became the newest member of the Gladhatter’s Club at presentation ceremonies in Gamebridge today. Sponsored by the Construction Safety Assoclations of Ontario to promote the wearing of safety helmets among construction workers, membership is open to all men who have been spared serious injury and possible death because they had the foresight and common sense to wear protective head equipment. Mr. Brown, an employee of Bailey Construction Co. Ltd., Orillia, was pulling lumber during bridge construction, using timber tongs hooked to a crane with a clevis. The timber bounced, unhooked the chain which released the cable with hook. It swung 50 feet and struck Mr. Brown, splitting his safety helmet.

They were Ethel May Rowntree and Roy S. King, and they were destined to see quite a bit of each other in the ensuing years, the last 50 of them as man and wife. Eventually, following a courtship of eight years, they were married June 28. 1911, in the Davenport home of Mrs. King’s parents. Saturday they held “open house” for their many friends at their home, 353 King Street. They have been residents of Midland since 1922.

We have included the full story that accompanied this photo as Mr. King was a very important and unheralded person in the history of Midland, appointed by the provincial government to guide us through ten years of insolvency, a task he took and managed with great skill and ultimate success. 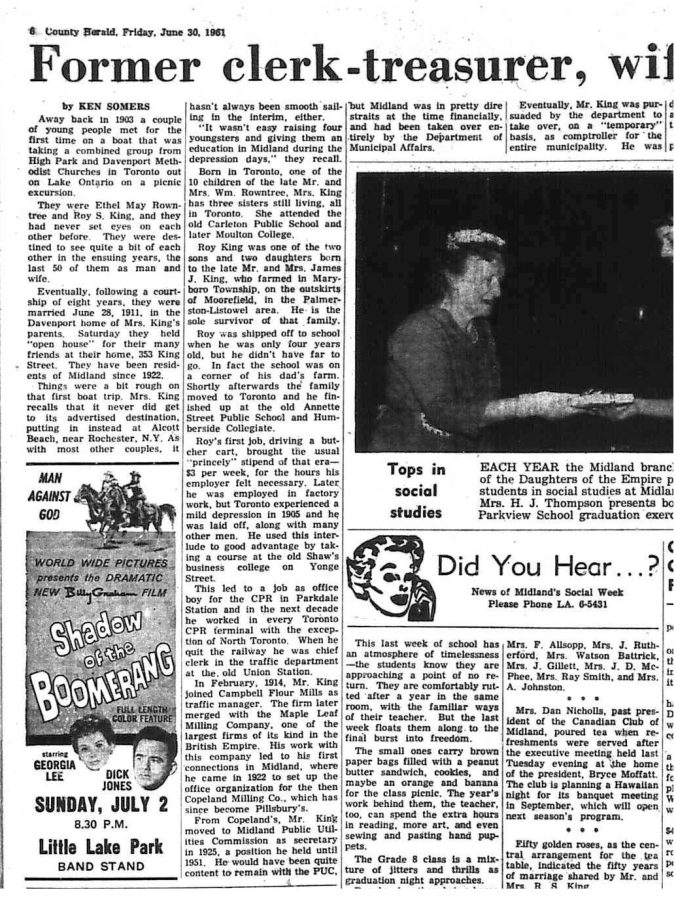 Each year the Midland branch of the Imperial Order of the Daughters of the Empire presents books to the top students in social studies at Midland public schools. Mrs. H. J. Thompson presents book to Sharon Stelter at Parkview School graduation exercises. 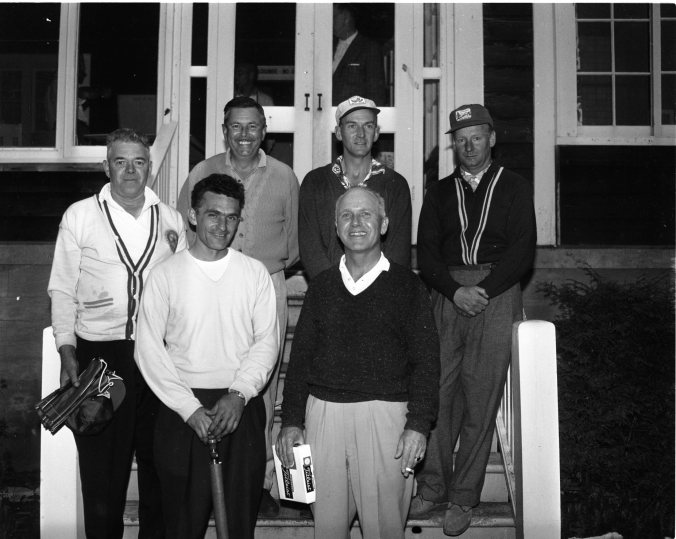 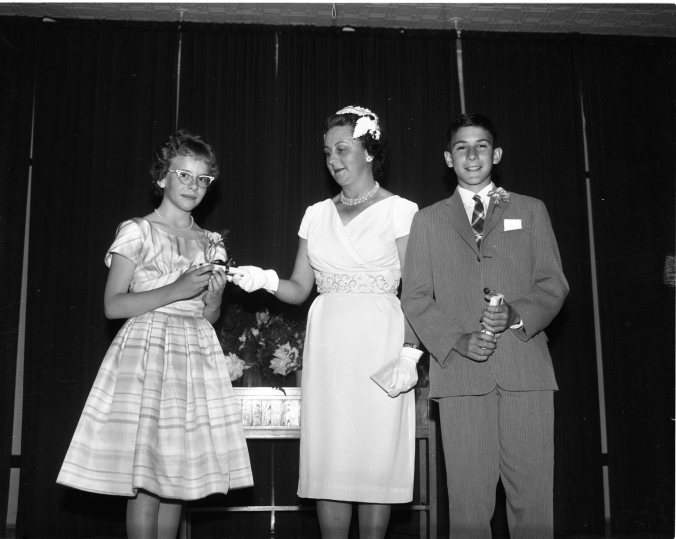 Tuesday was a big night at Parkview Public School as the Grade 8 graduates got their first “sheep skins.” Mrs. Stan Hacker presents home and school association awards to Jane Weckman and Max Morden, chosen senior girl and senior boy for the year.

This, I have to admit, brings back memories of butter scotch ice cream cones served over the counter for 25 cents. If your cousin was scooping them you got a lot for 25 cents. Who remembers Christie’s cream flips before they changed the filling, root beer popsicles and “Fizzies”.